I should subtitle this post...HOW TINKER CAME TO MY RESCUE!

After my evening by Lake Sylvia of picnicking, it was time to head off to bed. The plan was to stay at Lake Sylvia for two nights as my best girlie friend Tinker was driving over from Seattle, so we would have one last day together. That's the downside of having best friends on the other side of the world...sure you can talk on skype, but to actually sit down together and chat happens so rarely.

What had been a lovely place to camp was now a lake with my tent in the middle of it. Thinking hmmm this isn't good, I quickly got dressed and waded outside. Only one thing to do...carry all my gear down to the amenities block, try and dry some stuff with the blower hand dryer and wait for Tink.
I unhooked my food storage bag off the raccoon and bear proof tree only to find some critter had munched a few holes in it. Packing up my gear that very same critter seemed to like eating chamois towels too, as that had a few holes in it!

So I waited and waited for Tinker, one of the park rangers came to check on me. Apparently most people had left the state park and he offered to give me a lift into town. The road out of the park had turned into a small river!
I kept waiting for Tinker to come and rescue me..11.30, then midday, then 12.30 and still no Tinker. Finally we found each other...she had been driving around since 11 am looking for me! We were both so relieved to see each other and had to laugh, it was so typical of US!
So it was off to Montesanto to find a hotel for the night and to have a feed. One of my favourite things about Tinker is watching her eat a hamburger. I have never ever seen anyone enjoy a hamburger as much as she does and she didn't disappoint me this time either.

Thank you Tinker for rescuing me...your timing was perfect to meet up on the one day of the whole tour that was the wettest!! I said a sad farewell to my friend that afternoon...who knows when we will see each other again.

Not a lot to see in Montesanto. A few nice buildings. 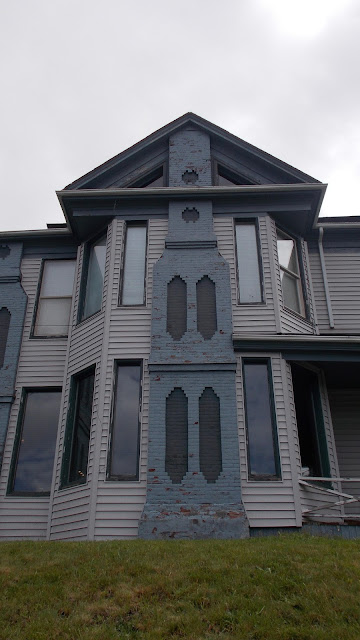 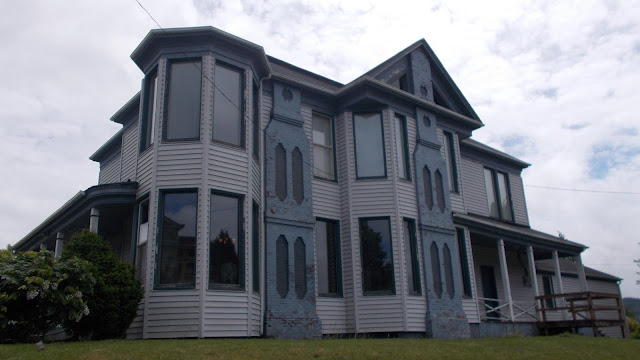 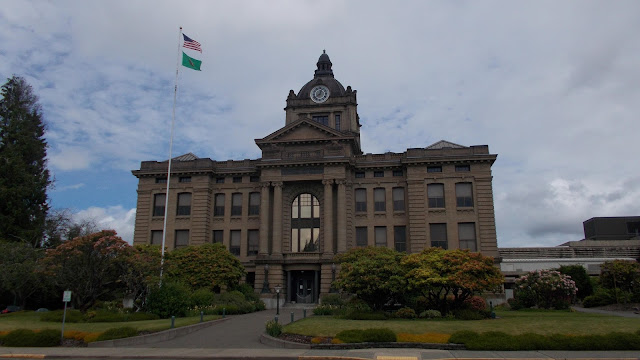 I ended up spending two nights in Montesanto waiting for the rain to stop. It had been a record rainfall that night I was camping. Just my luck! For the first time on the trip I couldn't decide what to do, which route to take, so I posted a message on the Pacific Coast group on Facebook asking for advice. I was offered a place to stay by a Warmshowers host in Aberdeen. It was only 20 km ride from Montesanto but I thought if someone is nice enough to offer I would like to stay, and I'm so glad I did.
The ride to Aberdeen was along a back road nearly all the way with the last 6 kms on the Olympic Highway. 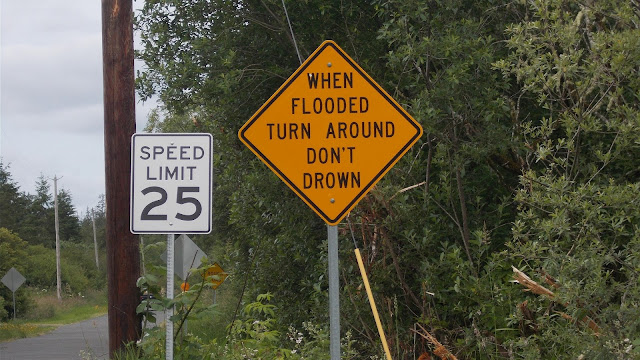 I stopped at a Starbucks (don't say a word...they have good tea and donuts, clean rest rooms and fast wifi!) and while I was inside my back tyre decided to go flat. My only puncture on the whole trip. 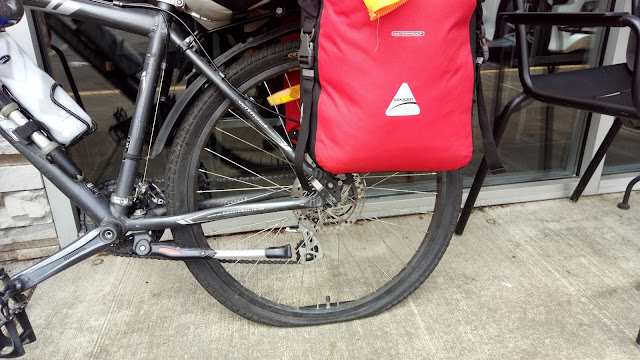 Luckily for me Lauri, my Warmshowers host came and picked me up. I had a great visit with Lauri...we rode down to the supermarket then headed off to GH Wine Sellers to buy a bottle of vino and of course we ended up having a glass, then it was off to Cakecakes to buy one of the best cupcakes I had ever eaten.
After dinner Lauri took me for a drive around the older streets of Aberdeen where the sawmilling tycoons had built beautiful victorian style houses.
I would have had a whole different impression of Aberdeen if I hadn't stayed with Lauri, so thankyou for such wonderful hospitality (and thankyou Sadie.) 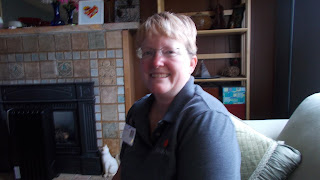 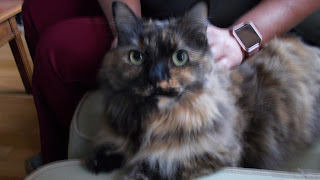 I left Lauri's in the drizzling rain and went in search of a coffee from a cafe she had pointed out the previous afternoon. Very good coffee at TinderBox Coffee Roasters, probably the best I have had so far on my whole trip. I also had a very odd french toast bagel with sausage, egg and bacon on it..kind of a sweet, salty and savoury combination. My tastebuds were a bit unsure about that!
On the way out of Aberdeen I passed this very cool sculpture. 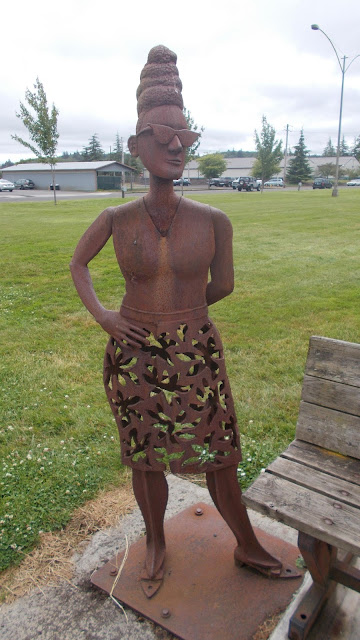 My destination today was Bruceport County Park, a nice easy 57 kms. Misty rain most of the morning but that didn't hinder the view at all. 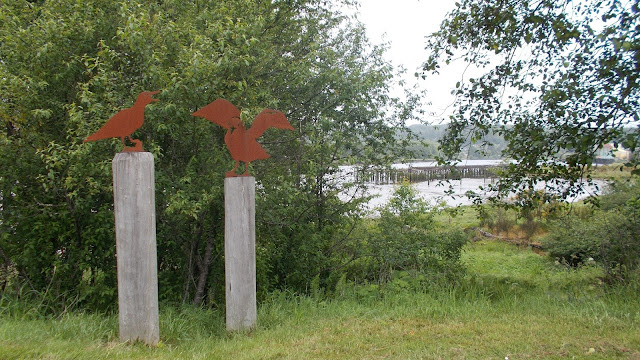 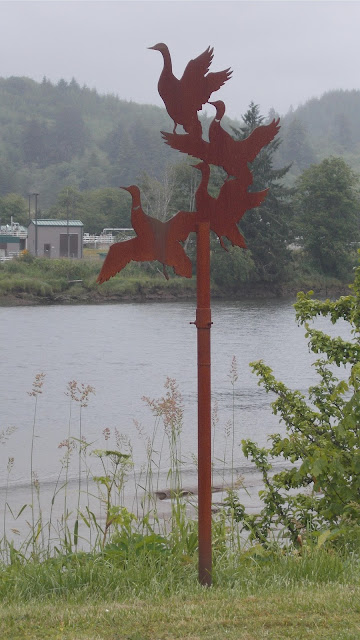 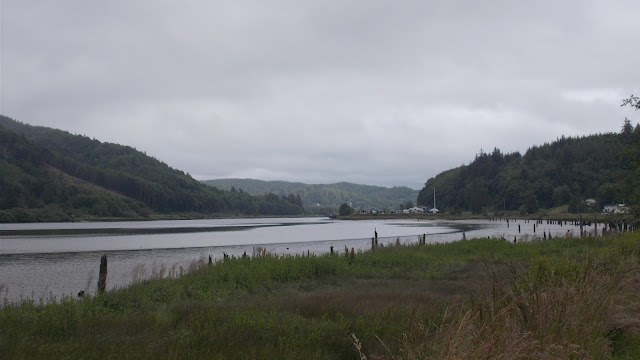 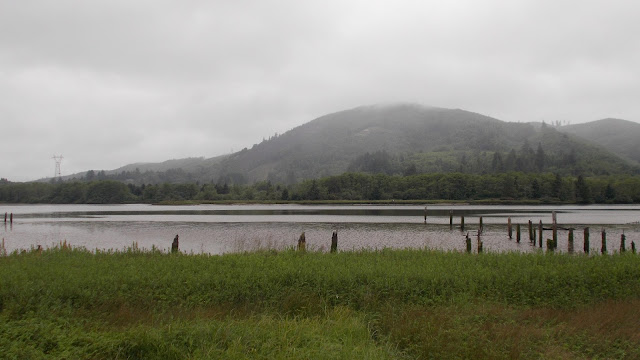 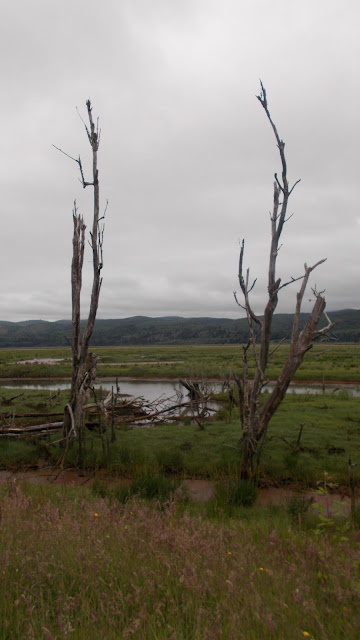 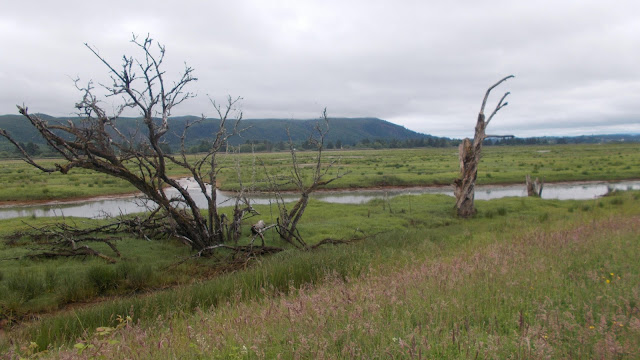 I found a bit of shelter for my lunch stop up this track off the main road. 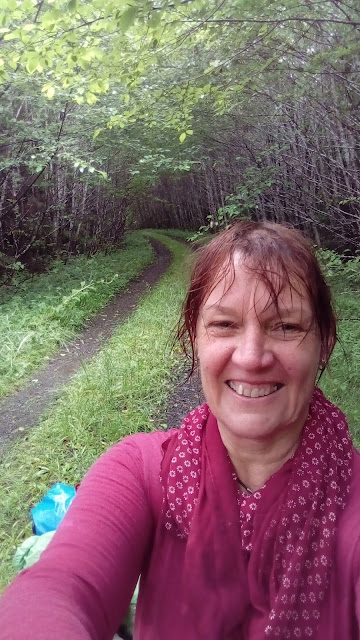 Lauri had mentioned an oyster bar in South Bend. Apparently the New York Chronicle rated them THE best crumbed oysters in America! I rode up and down the street a couple of times looking for the place, eventually asking a local who pointed me in the direction of the Chester Club and Oyster Bar. It didn't look the most salubrious of places, with ZZ Top lookalikes sitting outside smoking and a pool competition going on inside. I wandered up to the bar, checked I was in the right place and ordered a dozen oysters. They were the freshest, most delicious oysters I have tasted and I spent a very pleasant half hour or so watching the pool games, having a beer and eating oysters. 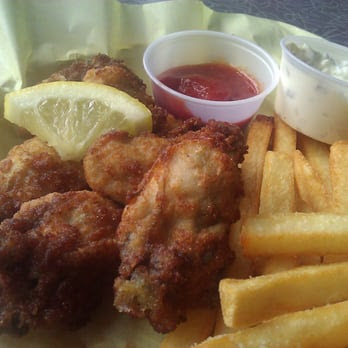 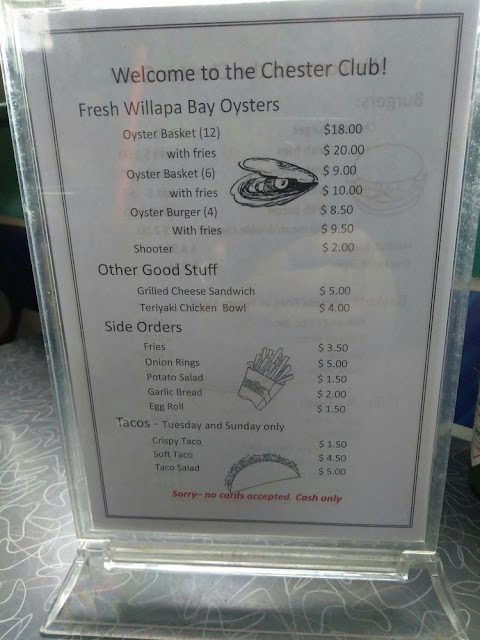 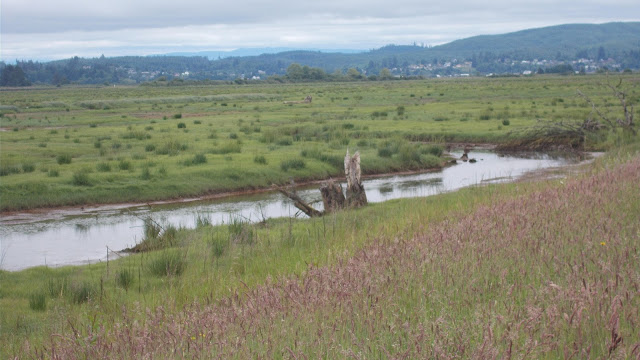 The weather had cleared by the time I got to Bruceport County Park. I had a lovely tent site, but this campground was slightly run down and I did put plastic bags on my feet in the shower. The hosts at the campsite were so friendly, even offering to drive me into town if I needed any supplies. 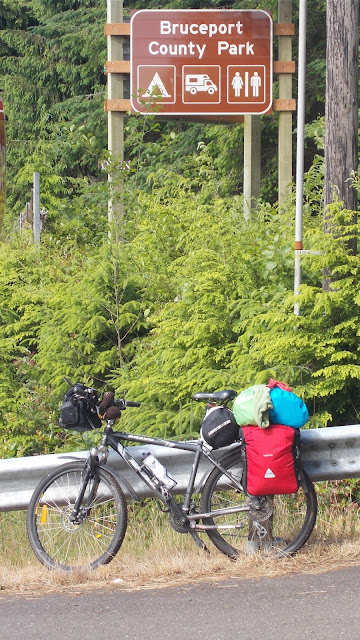 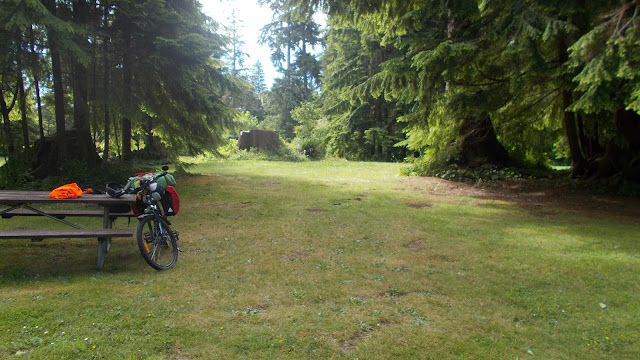 My neighbors in the next campsite invited me over for a drink (luckily I had bought for the first time a whole bottle of wine!). I ended up sharing a meal with Ken and Sarah from Seattle, as well as another bottle of wine...they were such lovely people and so interesting.
Sarah was waging war on the mosquito population with this very lethal electrical tennis racqet thing! It was pretty funny watching her leaping around swiping at them.
We wandered to the edge of the park to watch the sun go down over Willapa Bay. It really is a lovely spot. 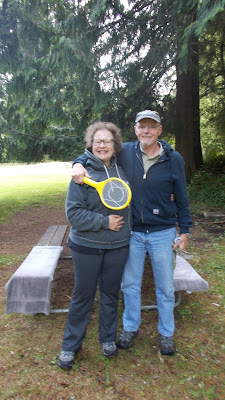 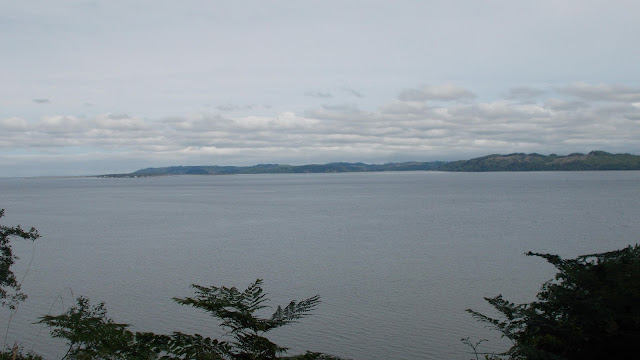 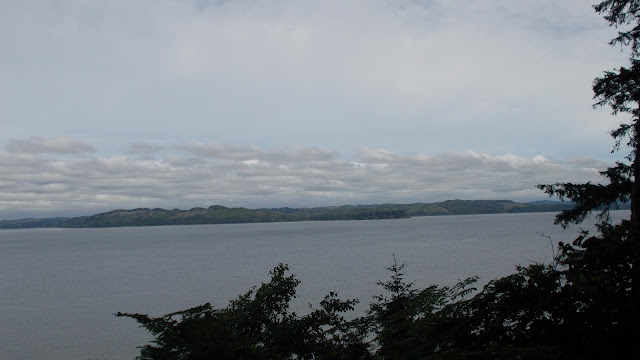 I'm so excited about the next days ride...I will finally get to the West Coast and the beach, and also it will be my last night in Washington State. I still can't quite believe I am doing this ride, every now and again I stop and think am I really doing this?