Yes, I am way behind in the blog and yes, I am back home now. I had thought it would be easy to keep my blog up to date, but contending with the lack of network coverage, saving my data for google maps (which I needed A LOT!), using only a phone to write a blog and having too much fun and enjoying myself meant that the blog kind of fell by the wayside.
Anyway it's much easier to do it now I am home, using a laptop and can actually see what photos I'm uploading!

I left Sidney on another ferry to Friday Harbour on San Juan Island. This means I am back on American soil and have left Canada behind. Friday Harbour is the main town on San Juan Island and also quite an expensive place to stay. After spending a lot more than what I thought I would in Canada ( most campsites were $30 a night and food was more expensive than what I thought it would be), I decided to see if I could find another WarmShowers host to stay with. Luckily Brendan and Susan were available and let me camp on their lawn for 2 nights. On my way to their place I met my neighbours. 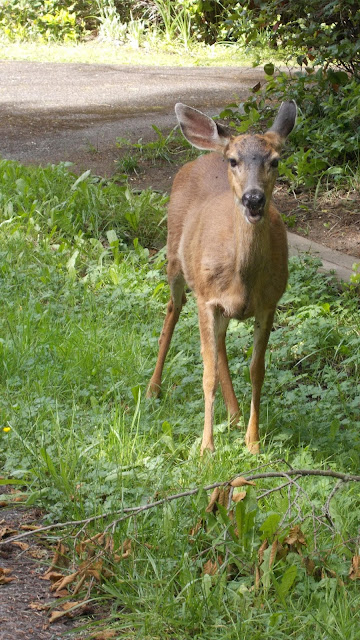 It amazed me how many deer I saw just grazing by the side of the road on my travels. I know they are a pest but its really cool!!

Brendan and Susan had invited some friends over for a BBQ and kindly invited me to join them. It was so nice relaxing and chatting with everyone. The hospitality of WarmShowers hosts was more than I ever expected. I found the perfect bottle of red to contribute to the evening. 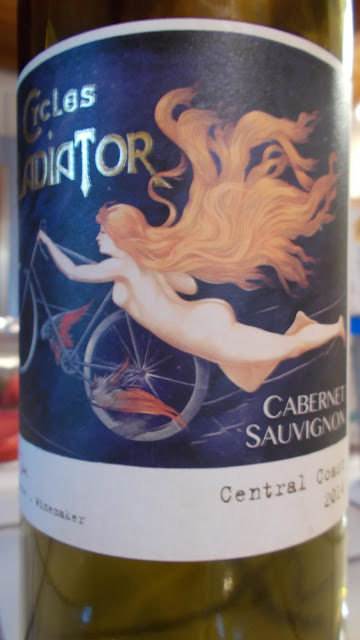 My plans for the next day was to bike around San Juan Island. There is an awful lot to see here and I could have easily spent another day or two. Brendan met me at the info centre and gave me a great route to ride to see all the best sights of the island.
My first stop was the America Camp Historical State Park. This is the site of an old fort that I think was only occupied for 14 years while the boundary of San Juan Island was sorted out between the British and Americans. These are the only buildings that remain and the rest is just beautiful open spaces. 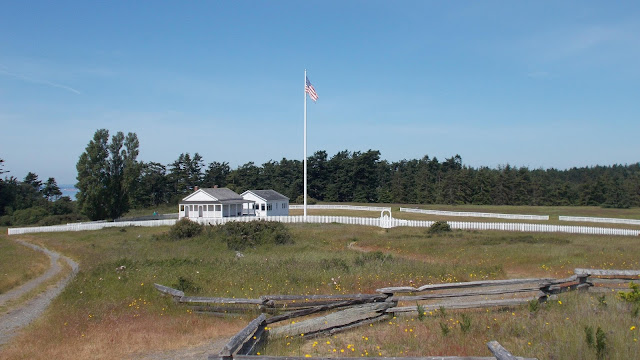 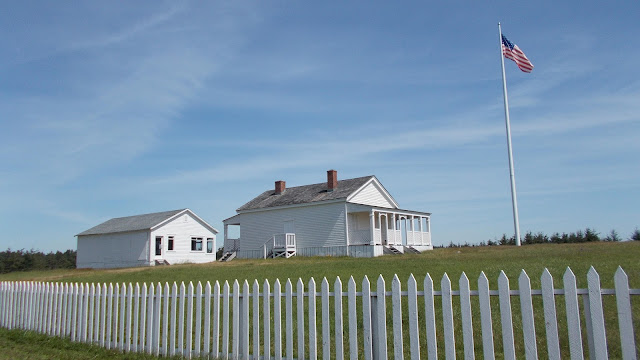 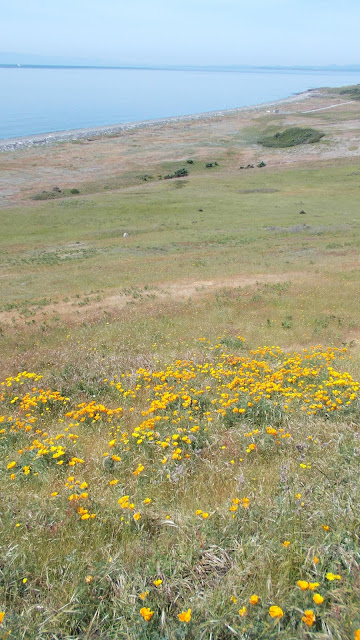 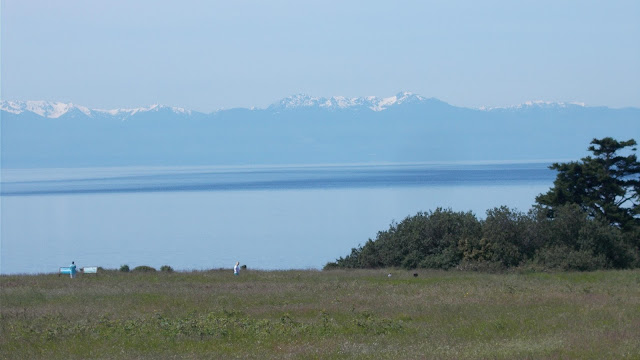 I rode down to the furthermost point and found this great lighthouse as well as seeing a red fox. Apparently they aren't seen that often so I felt kind of fortunate that this little fox was resting in the shade when I rode past. 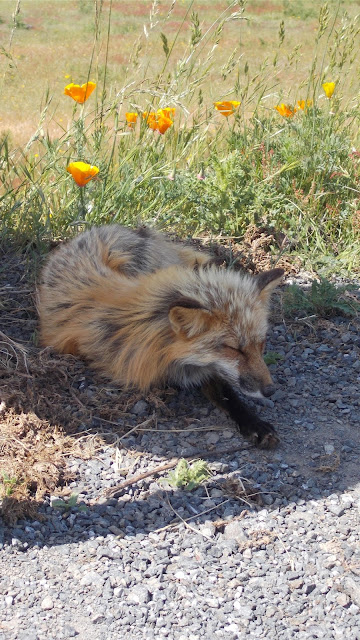 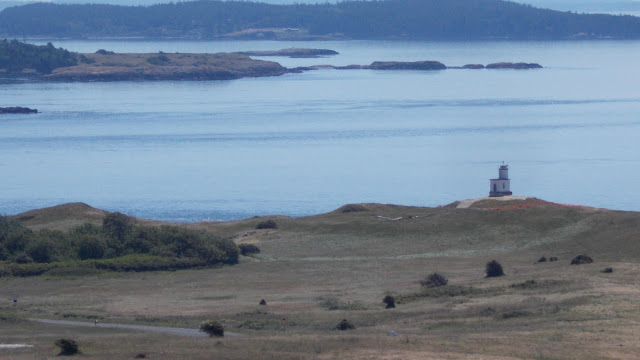 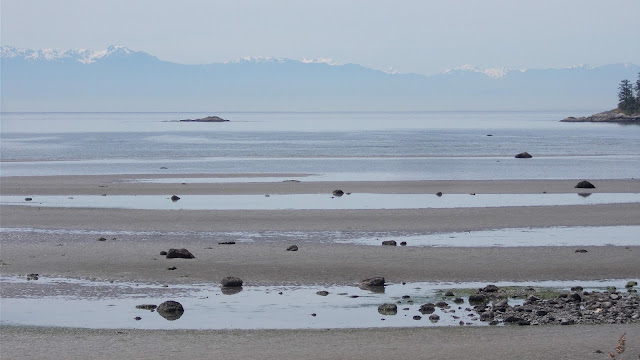 Leaving here I continued riding around the island to Lime Kiln Point. I knew there was a really great looking lighthouse here and also the only place on the road to get food. So there I am sitting under a lovely tree munching on a really good sandwich. This lady runs up to me and says "Oh you must go down and see the whale watching boats at the lighthouse." Me thinks why would I want to do that? but she was very insistent and carrying  a clipboard, so I thought I best do what she says.
And I'm very glad that I did! What she meant was there were Orca whales playing right near the lighthouse. They were closer to the shoreline than the actual whale watching boats, but trying to get a photo of an Orca whale is tricky....believe me these black specks are actual Orcas. 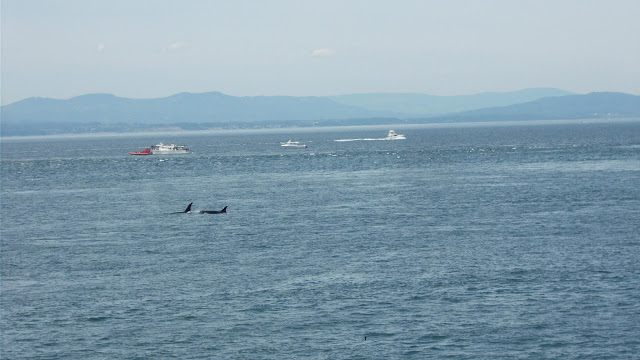 Much easier getting photos of the light house. I saw a lot of lighthouses on my travels and this one was my favourite. 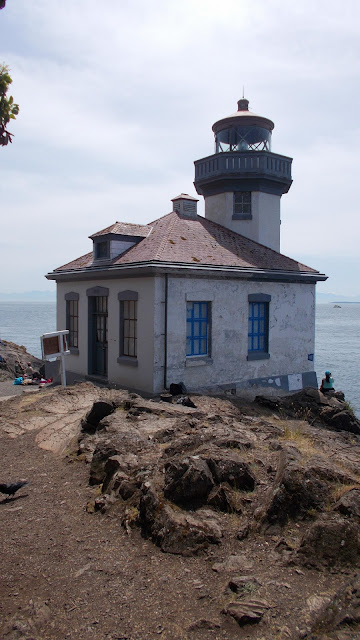 Leaving Lime Kiln Point and the orcas, I continued onto Roche Harbour passing quite a few quirky sights on the way. 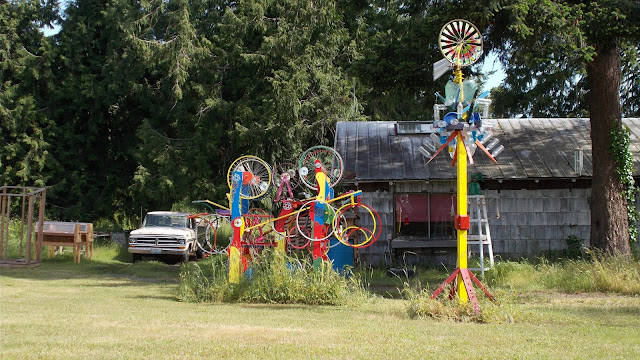 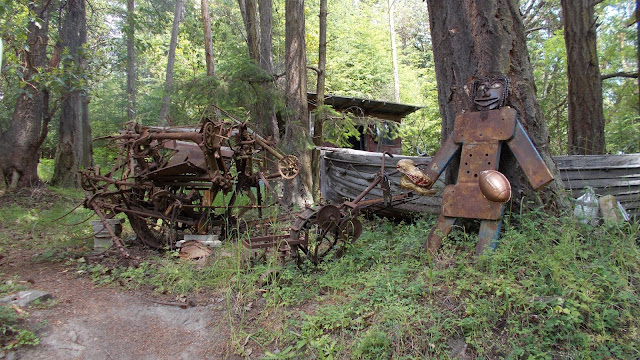 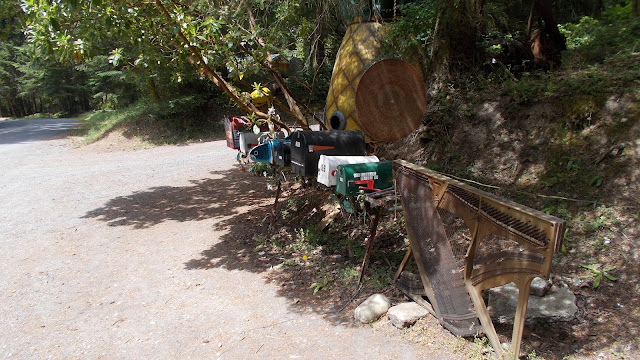 I also rode passed The Pineapple. This place is quite famous ( I think) amongst touring cyclists. I had two or three people say to me...look for the pineapple on San Juan Island. If you are a cyclist you can camp in the pineapple, in winter there is firewood, a stove and running water nearby. It seems the pineapple has neighbours now though. 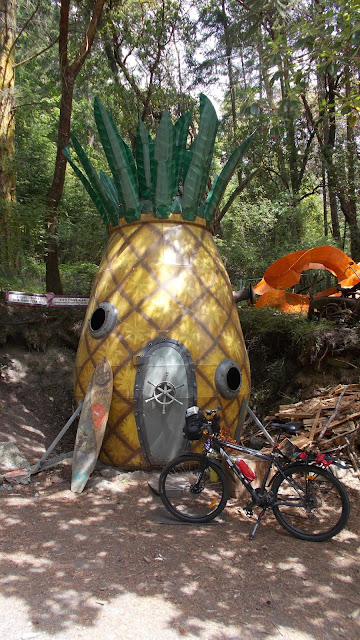 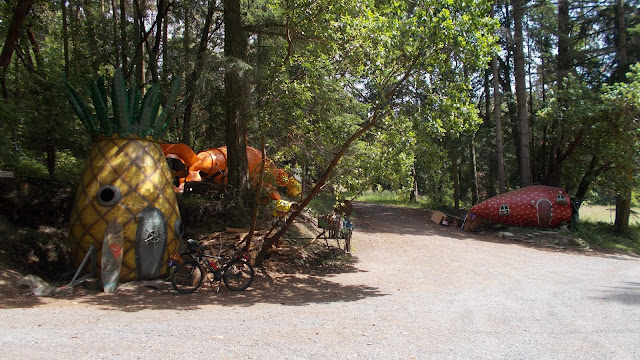 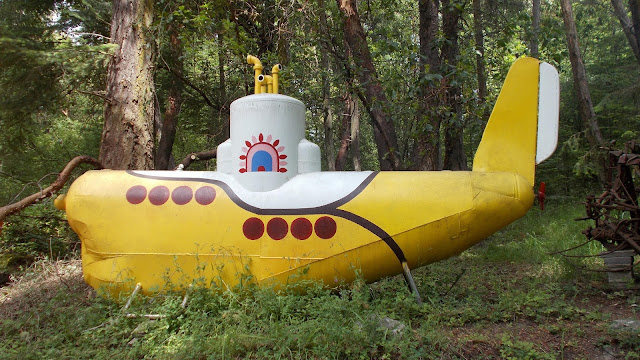 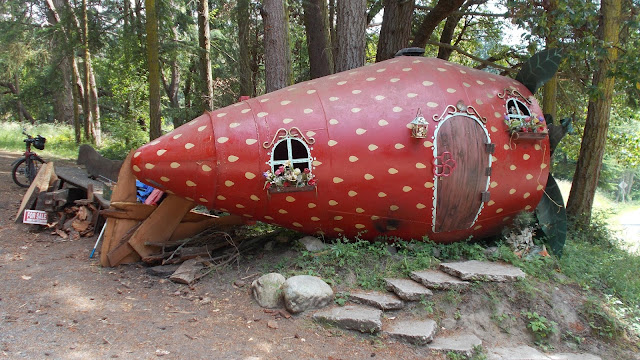 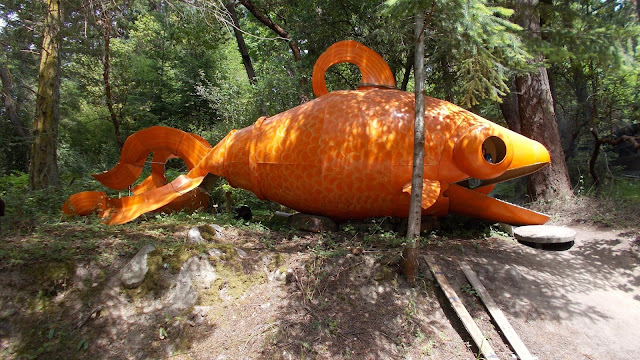 The reason I was interested in Roche Harbour was I had read about a mausoleum there. It is called Afterglow Vista and was built by John S McMillin. It really is a very beautiful structure, built in the middle of the forest. The families ashes are buried within the stone chairs surrounding the table. Its a fascinating story and if you are interested, you can find more info here 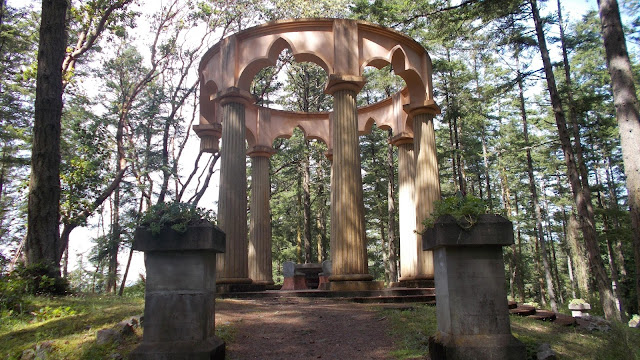 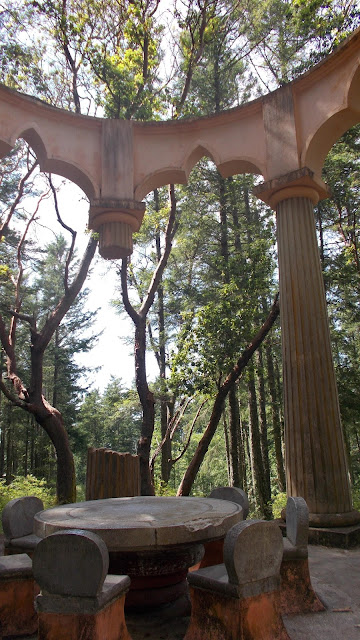 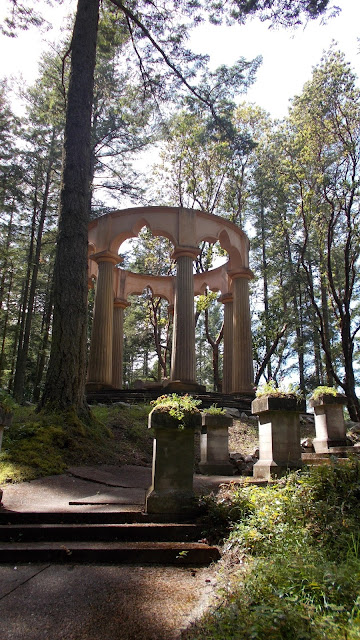 It was a 75km ride around the island and one of the best days so far on my trip. I ended the day back in Friday Harbour, stopping off for a beer and fish and chips at a local eatery, then perusing the shops before retiring to my tent on the lawn, with the company of the deer. 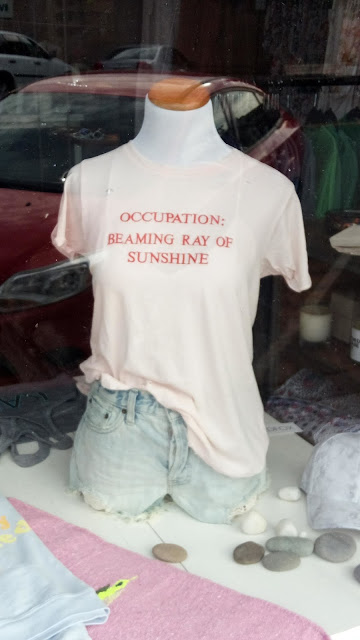