You know that feeling you get when you read something or hear about something you are about to do and it sounds harder or riskier than what you thought but ends up being fine?
Well that was me this morning...I was heading from Dosewallips (still no elk herd) to Shelton via the Hood Canal.
The Pacific Coast book had said parts of this road had no shoulder, narrow, blind corners and logging trucks! Despite my new found confidence I was a bit apprehensive.

It ended up being not a bad days ride! Yes it was noisy on Highway 101, and yes there were all sorts of trucks, but I had found so far the truck drivers are very aware of bikes and go out of their way to give us room. Its the RV's and cars towing caravans that are scary and SO unaware.

Anyway the day started out biking through more tree lined road, so it was so nice to finally get to the Hood Canal and some open space and views. As much as I like trees...hour after hour of trees does tend to get a bit boring. 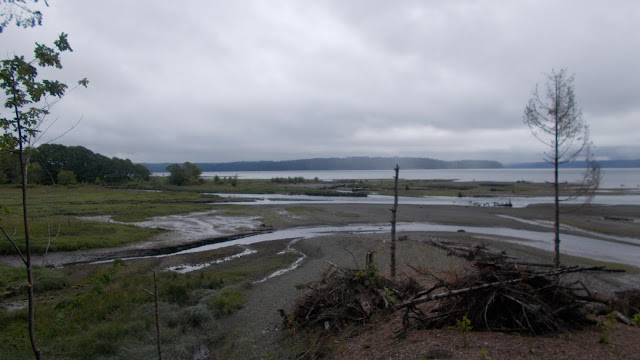 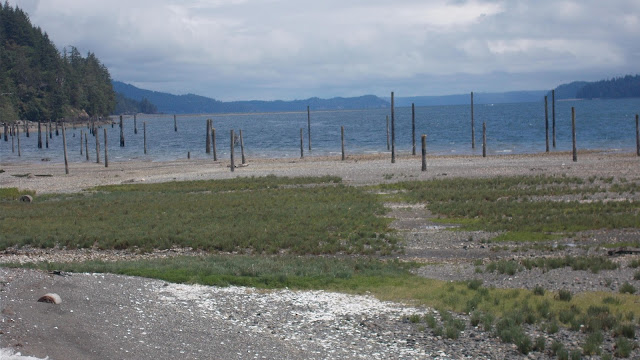 I think I spent more time checking my rear vision mirror than I did the view on this part of the trip, but I did manage to find places to pull over for some photos. 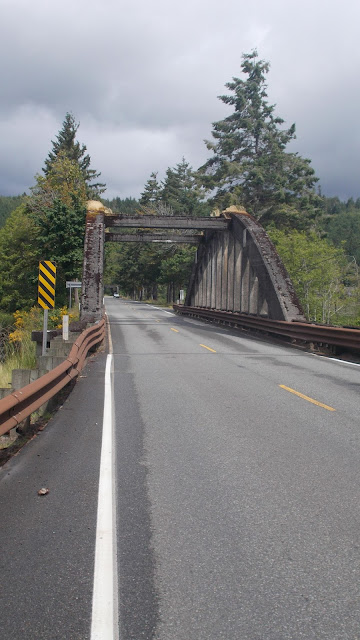 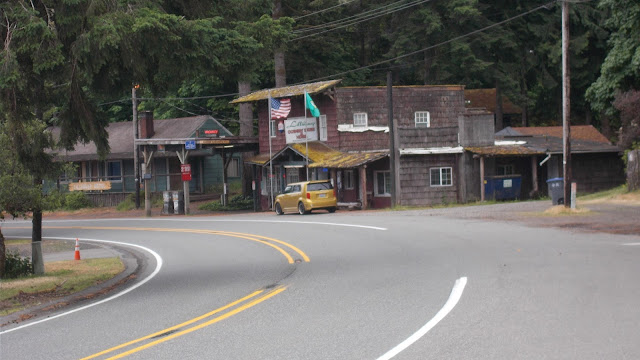 As you can see it wasn't always no shoulder and narrow. I love these small towns and always stopped to buy something at the store. People are so friendly and curious...I wonder if it is because I am a woman of a "certain" age and on my own, that everyone I met without exception, was helpful and friendly. Chatting with other touring cyclists later on in my tour, the guys on their own or couples didn't seem to experience the same amount of friendliness I did.

Out of the blue on the highway I passed this building. I think it is generating hydro electricity, I did read the information panel but never wrote it down in my journal. But it is a beautiful building and worthy of stopping to munch on a marmite and cheese sandwich and admire. 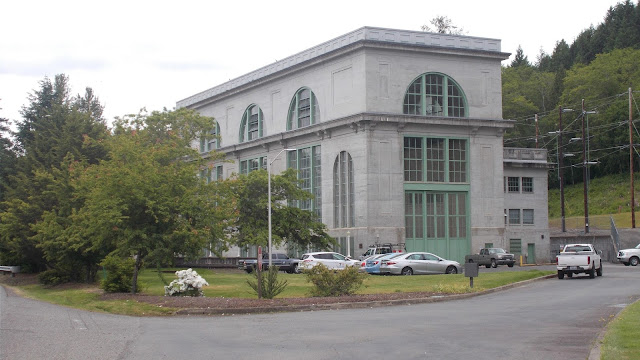 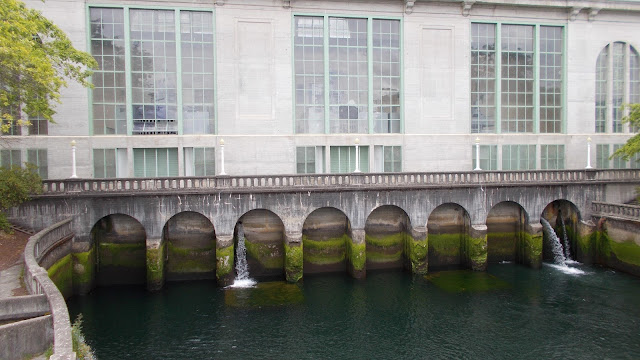 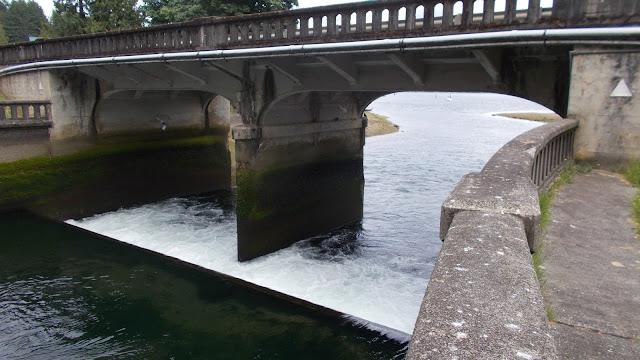 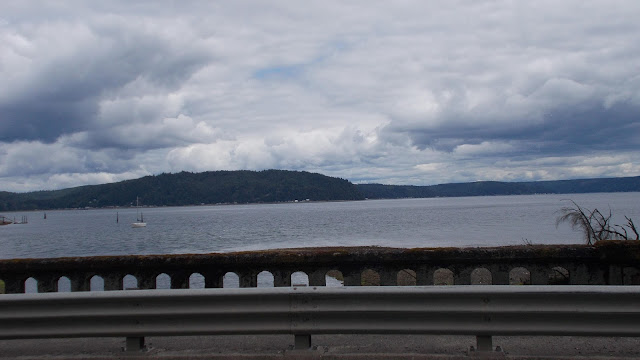 I also passed a place that promised me wonderful cooked oysters so of course I pulled over only to find they didn't cook them that day! I could already taste those delicious, freshly cooked oysters when I walked in the door, and the idea of a container of cold oysters just wasn't appealing.
On the subject of food...I was eating so well on my tour. A lot of fresh fruit and salads, seafood and really good burgers at local diners and of course the daily sugar hit of a donut from a bakery! I never eat donuts at home but one of the great things about cycle touring is you can eat pretty much anything.

Riding along side the Hood Canal I passed quite a few fireworks stands. I was told later that fireworks can only be sold on native american owned land, which also explains why I passed a huge casino. Apparently they can also operate casinos when no one else can. I have no understanding about any of this, I am the first to admit that, but it seems not right to me that people live in houses with no water and falling down buildings and then just down the road is a huge casino. 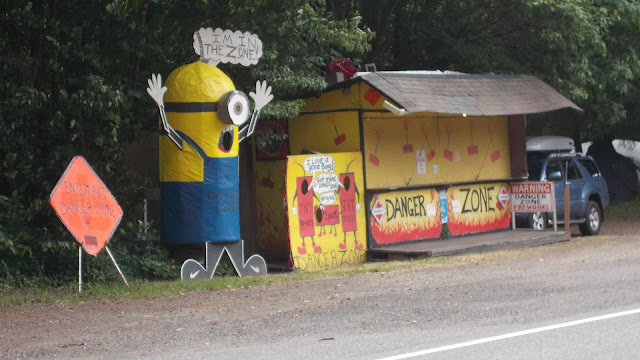 One thing I noticed was despite roads surrounded by what I thought was forestry and logging, there are a lot of people living up these side roads. I passed quite a few roads like this that looked like just a forestry road but had all these letterboxes. 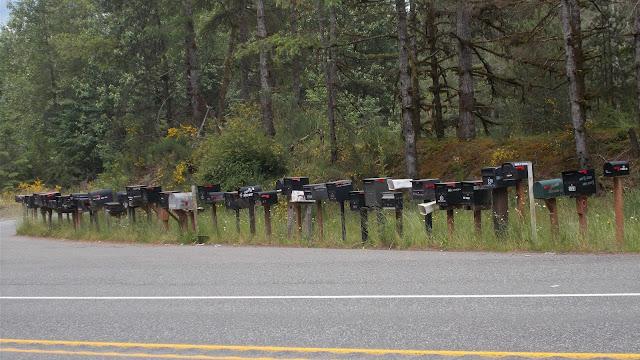 I finally reached Shelton via the long way again. I missed the turnoff and ended up adding another few kms backtracking but I did see what I think was two bald eagles so it was worth it. Shelton is known as the Christmas Tree capitol and I passed quite a few plantings of trees. 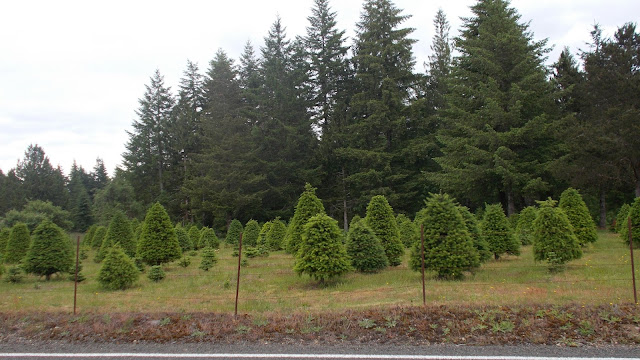 I had a wonderful stay with my Warm Shower hosts Laryre and Judy. We had made contact before I left and they were a "must visit" as both Larye and Judy weave and have quite a few looms in the workshop. I felt truly spoilt staying with them, hearing their tales and sleeping under a beautiful patchwork quilt. They gave me a fabulous breakfast which was enjoyed over conversation ranging from politics to hippies to biking and watching the fattest squirrels I have ever seen playing around in the trees. 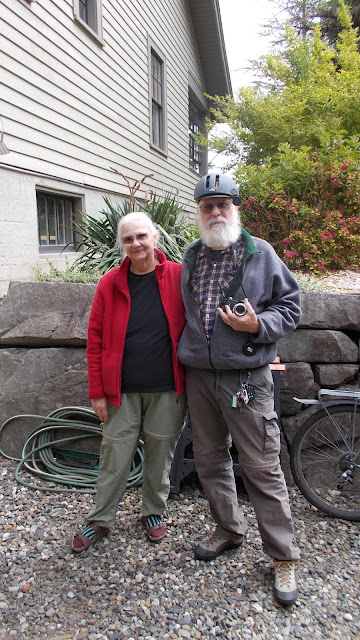 Larye then rode out with me in the morning and set me on the right road to Montesano and Lake Sylvia State Park. Thankyou so much Larye and Judy for a truly memorable and enjoyable visit.

Following Larye's insruction and the ACA map I managed not to get lost and found myself in Elma. I felt this part of my trip was reason for a celebration...my original plan had been to start from Shelton and I had looked at this route so many times on google map before I left that it was great to be finally riding it. Larye and Judy had mentioned the Miller House Deli in Elma as a great cafe stop, and it was! Best lemon cake I have ever tasted. 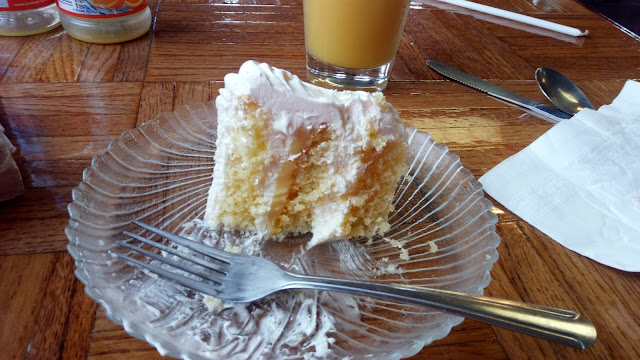 It really was a lovely ride to Montesano, quiet road and no hills. I did get lost in Montesano but two sheriffs kindly showed me the way up a very steep hill to Lake Sylvia State Park. I'm not sure why it is, but it seems to me that all state parks so far have a hill to climb.

Lake Sylvia State Park is beautiful! The hiker biker campsite wasn't that great, but since the park was fairly empty the ranger let me camp on a normal campsite. 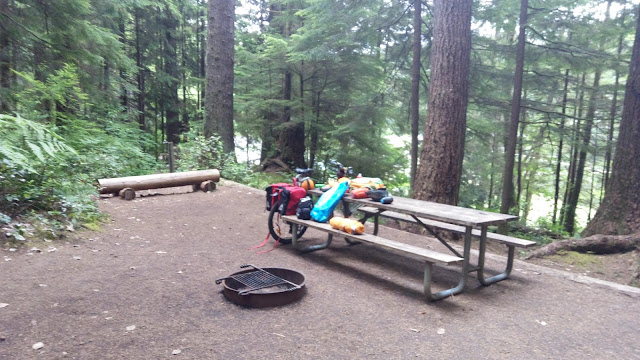 I had a lovely relaxing evening down by the lake picnicking and watching all manner of fishing boats row around the lake. I was joined by a few Canadian geese grazing their way through the grass and I saw two tiny little dogs with life vests on! 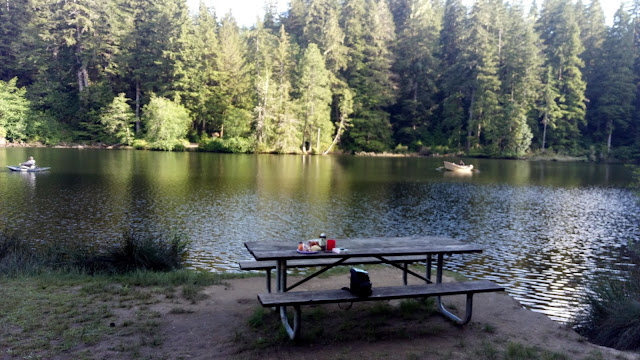 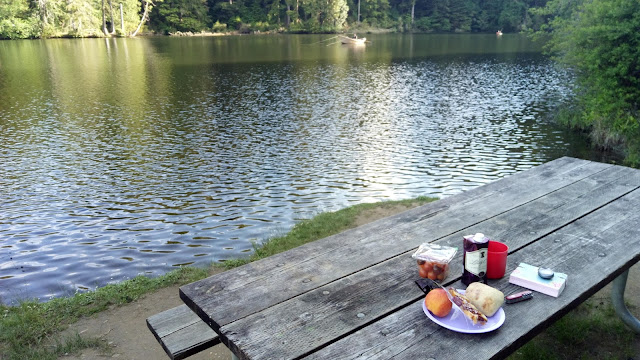 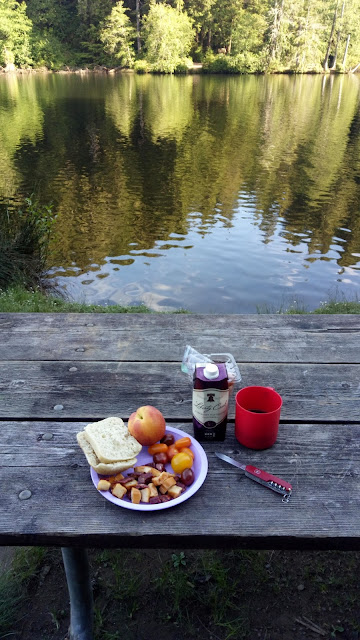 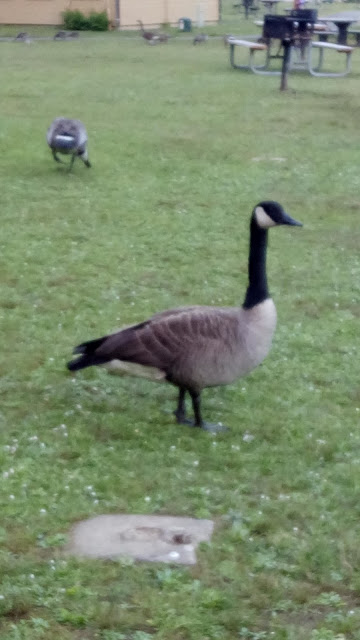 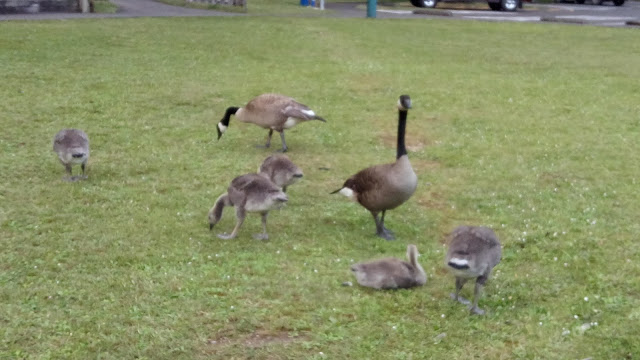 Its an odd thing when you travel on your own...you have times of feeling lonely, times of wishing people wouldn't talk to you and then other times like this evening of just pure 100% contentment.
If I had known what was just around the corner I may not have felt so relaxed and contented!