What can I say about Port Townsend! I really loved this town. From the moment the ferry started cruising into the harbour, to the day I rode out of town along a beautiful trail I had a great time. 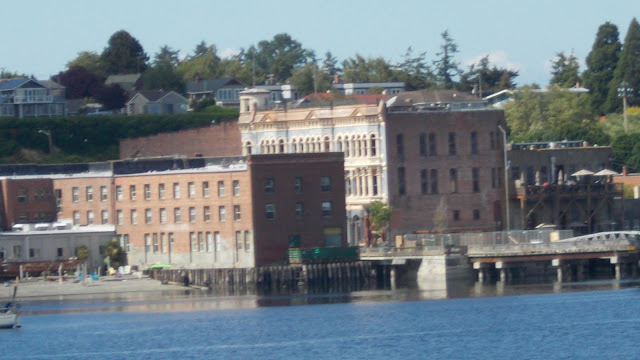 I had been in contact with a fellow bike tourer who lived in Port Townsend and he suggested I stay at a Warm Showers place hosted by Dan and Lys Burden. Thankyou Richard for that great suggestion...this was a touring cyclists paradise!
Unfortunately Dan was away but Lys was in town as was the "other" Dan, her brother. Dan and Lys cycled from Alaska to Argentine in the 1970's (you can read all about their trip in National Geographic), and they were pretty much the forerunners of what is now the American Cycling Association and the bike touring movement.
The number of touring cyclists they have hosted since then is amazing, as is the space they have made for us to stay in. You can just make out Birdy parked in the doorway of the Warm Showers room. 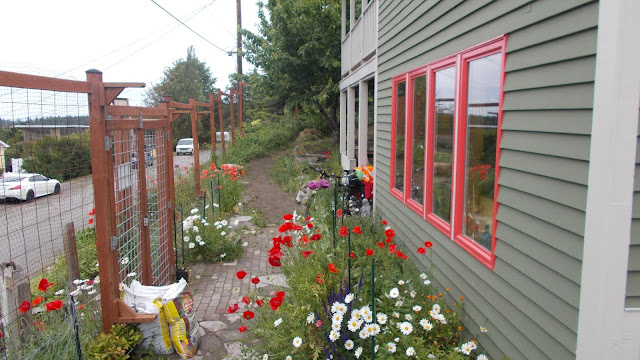 An added bonus of staying with Dan and Lys was I got to meet Toosie, who is such a sweetie and kept me company on my walks to the little grocery store nearby. 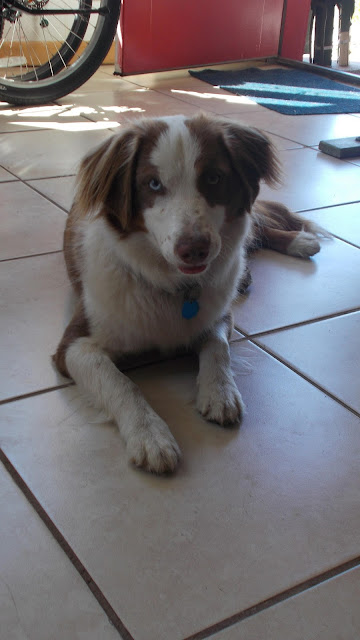 Lys kindly let me stay for 3 nights as I found out there was a Steampunk Festival on in town the next day and I also wanted to go for a ride to Forth Worden Historical State Park.
Port Townsend has some lovely old buildings and quite a few very quirky shops. Its definitely a town that is just the right size. 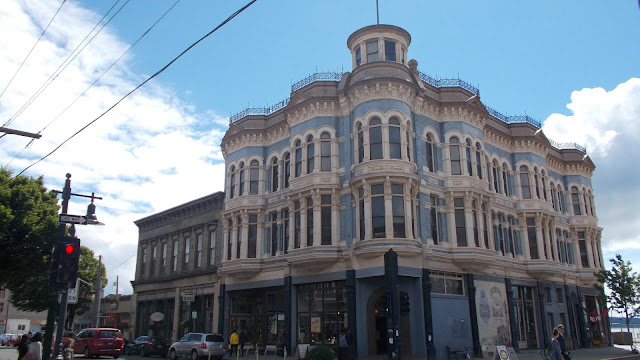 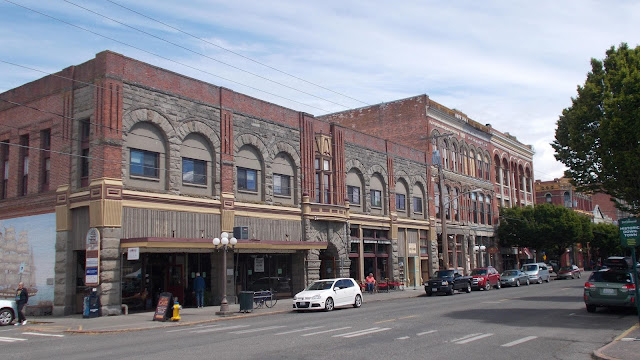 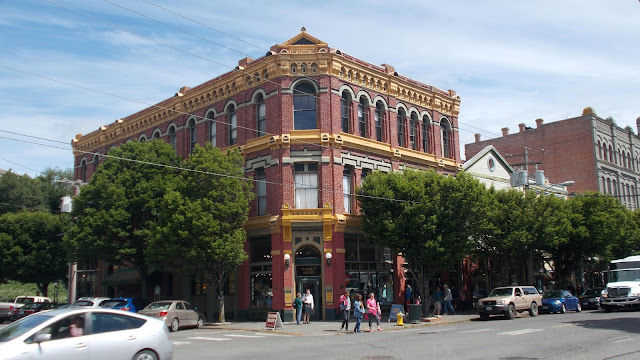 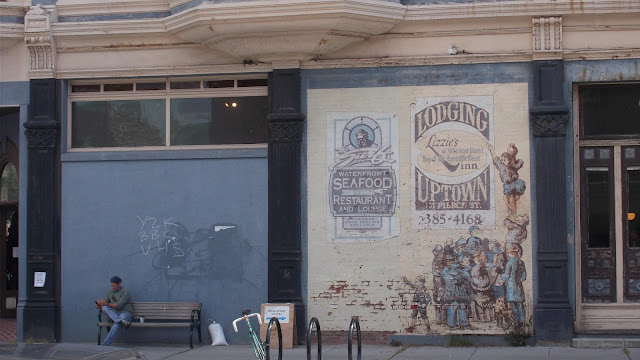 I spent nearly the whole day wandering around the old part of town and checking out the Steampunk folk. There was all manner of entertainment going on, flintlock displays, tea drinking competitions, folky morris dancing stuff ( still makes no sense to me), steampunk bicycles and of course plenty of incredible outfits. 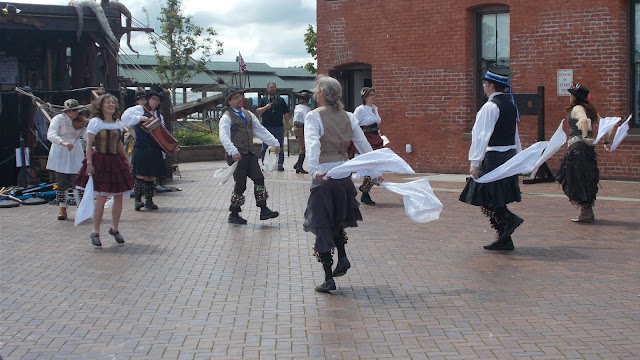 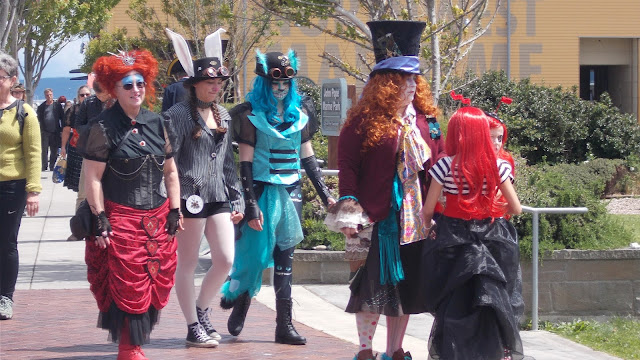 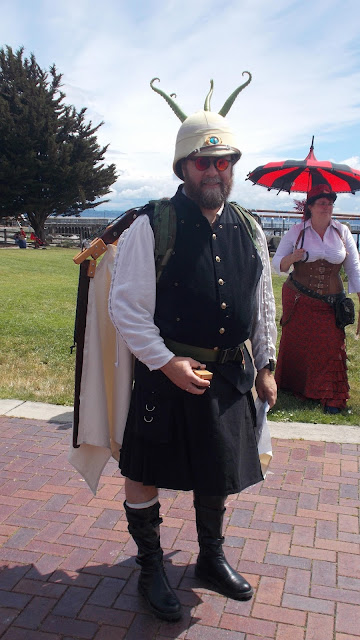 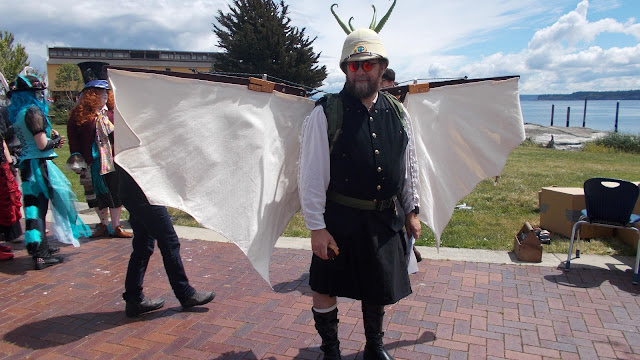 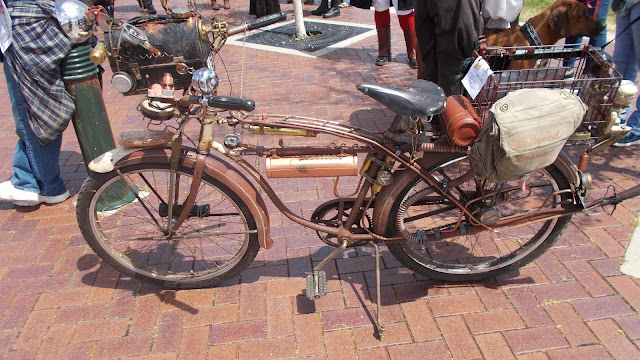 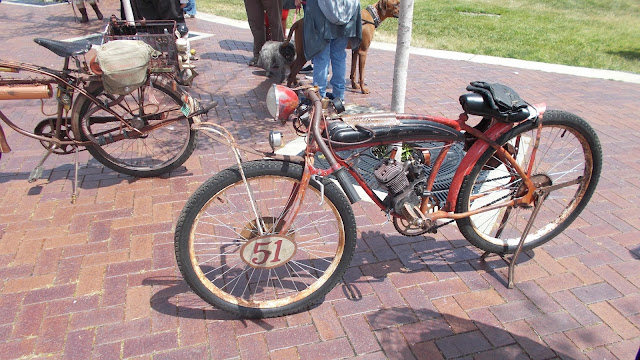 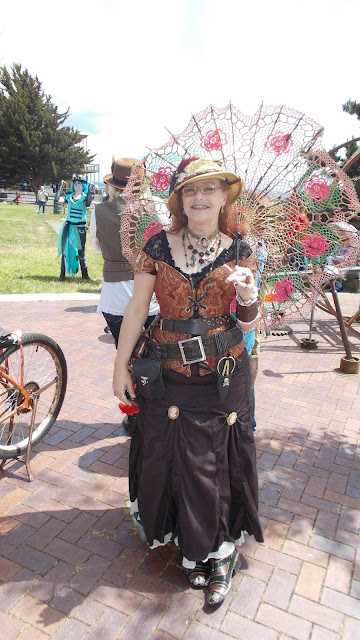 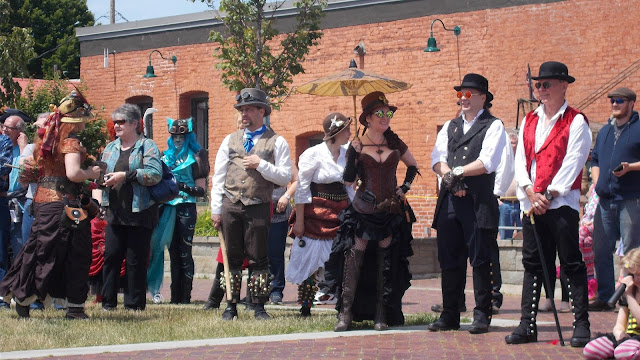 After that it was off to meet Richard for a beer or two and chat at a local brewery. One of the great things about bike touring is the people you get to meet in the course of your travels and even beforehand. I found the bike touring group, womens touring group and pacific coast group on facebook full of great information and inspiration. That was where I met Richard, and we spent a very pleasant couple of hours chatting away. Its great to talk to locals and hear about the town from someone who lives there.
Richard mentioned that the hiker biker sites at Fort Worden had moved to a nicer location, so I wanted to check them out. Even though I wasn't staying there, its always good to have a look so you can pass info on to other cyclists.
After a wonderful nights sleep I headed off to Fort Worden. There are so many forts and lighthouses scattered through the islands and on all these prominent points. I guess at one time when they were all functioning it served as a good defence.
Fort Worden is not used as a fort now but all the buildings are still intact and maintained and now serve other purposes. The parade grounds and surrounding areas are beautifully looked after, and the hiker biker site is now located away from the main camping and closer to the lighthouse...a much nicer location. 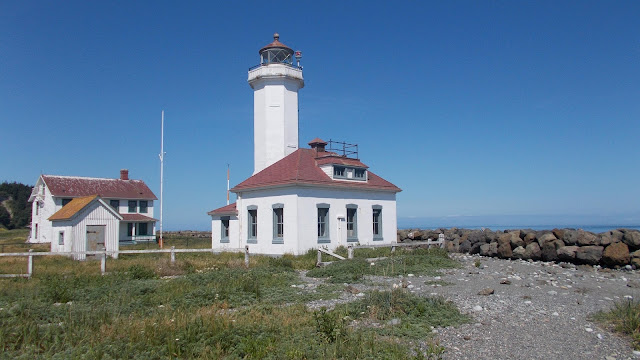 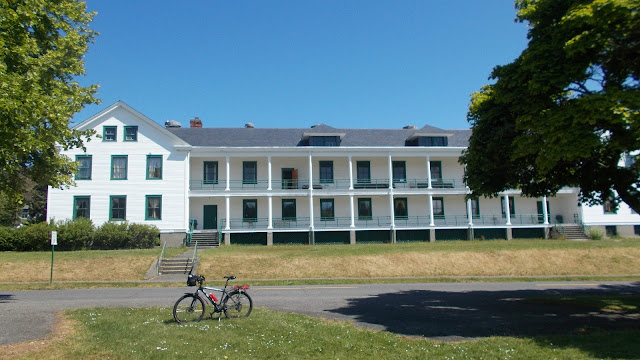 Its funny writing about this part of my adventure now...it all seems a long time ago but I can still recall how I was feeling. I really felt I had gotten into the stride of bike touring now, it took me probably nearly two weeks to really settle into it and realize that I could go where I wanted to, when I wanted to. I knew after the second or third day that the schedule I had written up was going to get thrown away, but I still felt this need that I had to "be somewhere". I also could feel my stamina and fitness increasing and I would wake up in the morning feeling excited about what the day would bring.

So it was with this sense of excitement I headed away from Port Townsend. I was hoping now that I was on mainland USA, that I would meet up with some other touring cyclists. So far I had met cyclists out for weekend trips or touring cyclists riding the opposite direction to me. I was never alone at campgrounds, there are always plenty of RV's and campers but it would be nice to meet some like minded people.

I decided to head to Dosewallips State Park for the night for no other reason other than I liked the name! There is a wonderful bike and walking trail out of Port Townsend called the Larry Scott Memorial Trail. It was a bit tricky finding the start of it as you ride around the wharves and ship building yard and it is tucked away in a corner.

The first thing I passed was this huge recycling plant...well I think it was or maybe a paper pulp processing plant. After this it was a lovely ride along the coastline and then the trail veered into beautiful forested area. 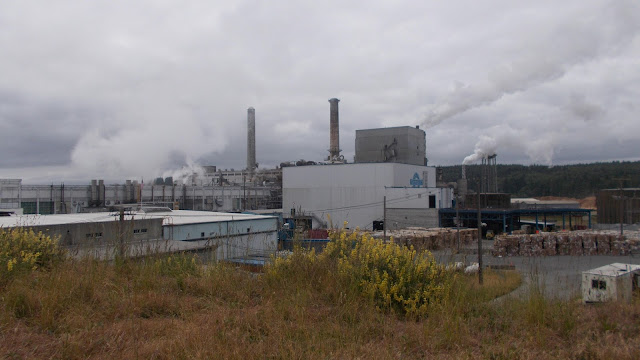 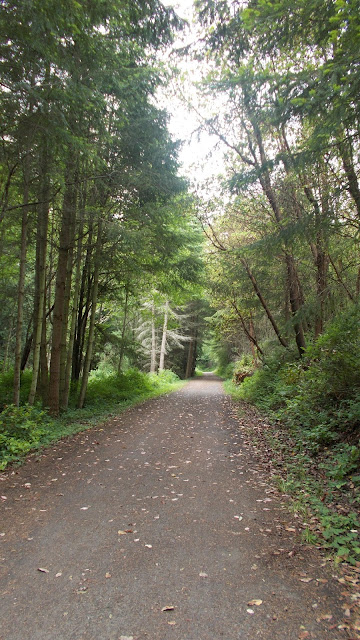 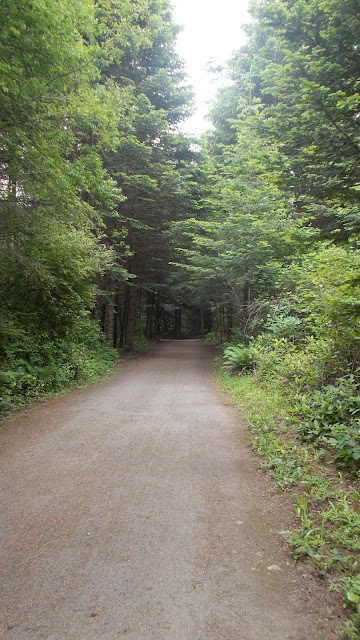 Once off the trail I hit Highway 19 but there was surprisingly little traffic and a lot of trees, trees and more trees. 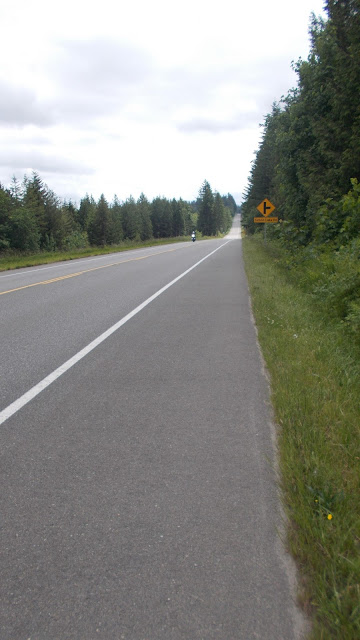 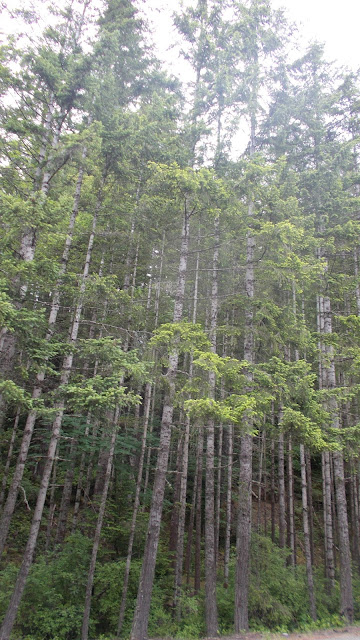 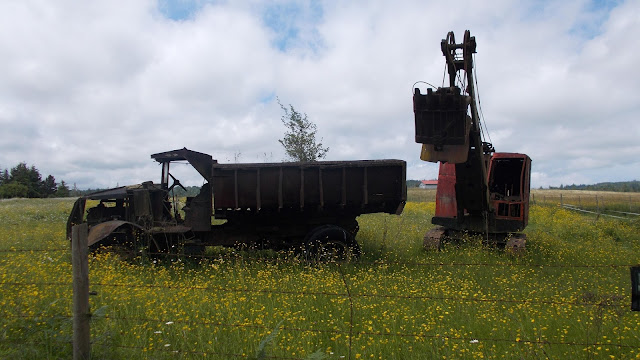 Finally made it to Quilcene...motto "the Pearl of the Peninsular" and had my first meeting with Highway 101. This highway was pretty much the road that will take me all the way to the end of my route. 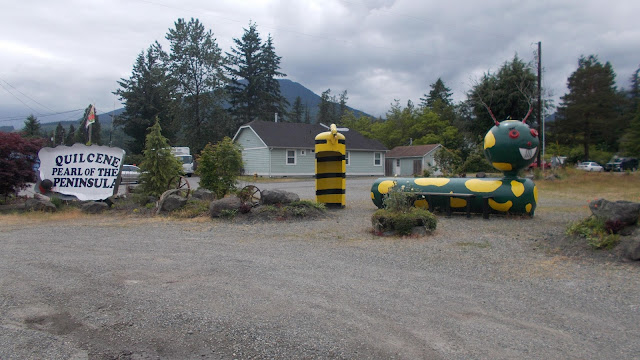 After riding through more trees I made it to Dosewallips State Park and yay...finally a cheap campsite. It was only $12 for the hiker biker site compared to the $20 or $30 I had been paying elsewhere. The Park Ranger said there was a herd of wild elk in the park, I saw plenty of elk droppings but no elk. 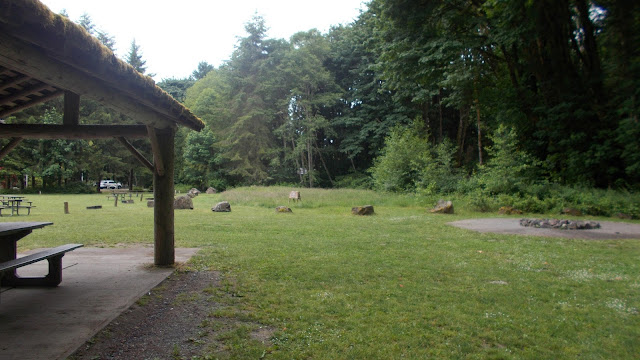 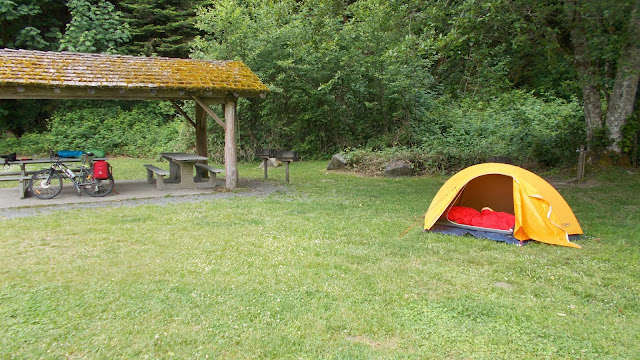 Birdy and I had the whole biker hiker site to ourselves and she got to be undercover for the night. I always liked to get my tent set up and my bed organised first thing on arriving at camp, no matter how tired and grotty I felt. 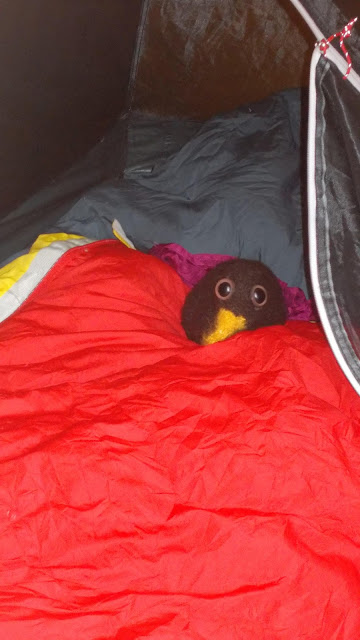 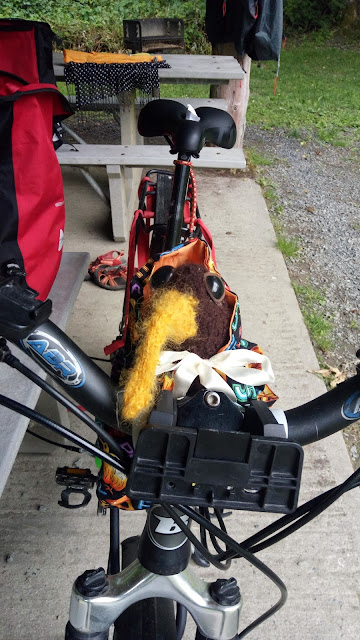 After a pretty good nights sleep and a bit of rain and still no elks, it was time to head off to Shelton. I was averaging between 60 and 70 kms a day which seemed to suit me, and today would be a 71 km day (if I didn't take a wrong turn). I knew the road would be challenging for me today...no shoulder, blind corners and logging trucks but hey...I had now clocked over 700 kms and was a lot more confident on the roads.