Got to San Francisco in one piece after an interesting trip with Amtrak.
The 8 hour bus ride to Martinez was actually pretty good and I got to see a lot of countryside as well as driving through Humboldt Redwood Forest. The shoulder looked quite narrow on the highway and the road was very busy, so a part of me was quite glad not to be riding it!
Caught the train after a few false starts. Why don't they have signs saying where the train is going to? I nearly got on the wrong train, going in the wrong direction, then nearly missed my train and had to run over the tracks to get it. It was one more short bus trip and I arrived in San Francisco to a huge big hug from Tiff.
Tiff had stayed with us last year when she was on a bike tour of NZ and we had stayed in touch, so it was great to catch up with her. Dropped my gear off at her place, met Whiskers (because you are what you eat) then headed off with Tiff and her dad Kevin to Chinatown for a feed. 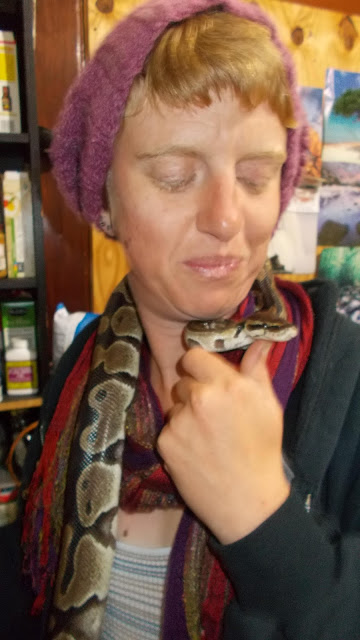 I had been to San Francisco before and loved it, but this time it was a different experience. After a good nights sleep Tiff and I set off on a bike riding adventure around the whole city. Well.. it felt like the whole city! First stop was catching the BART to the centre of town from Oakland, then we biked around Fishermans Wharf to the Palace of Fine Arts. What a beautiful building! 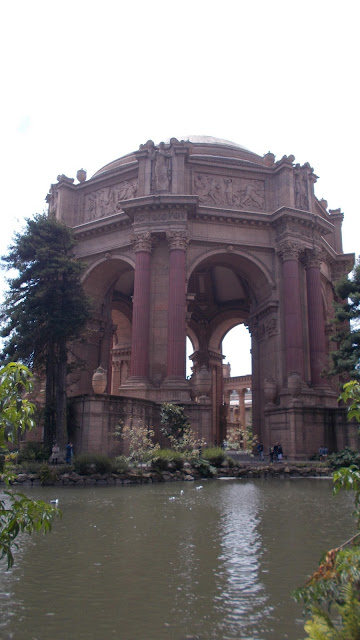 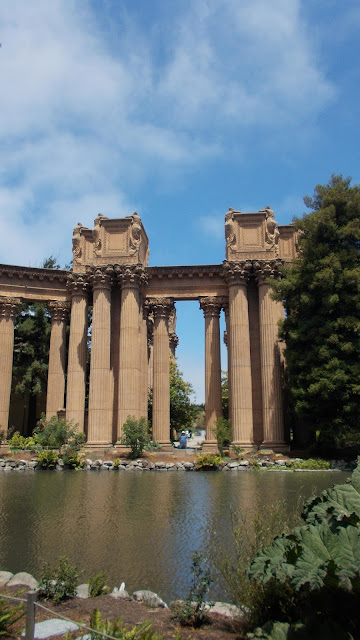 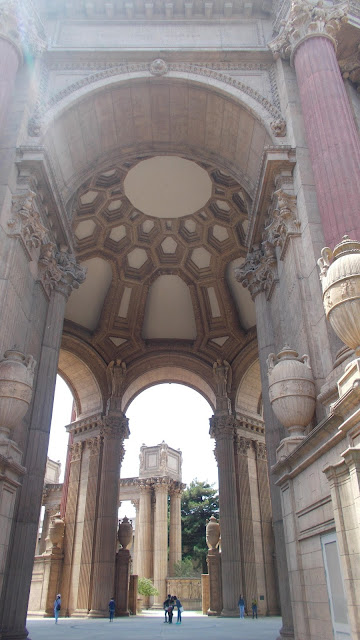 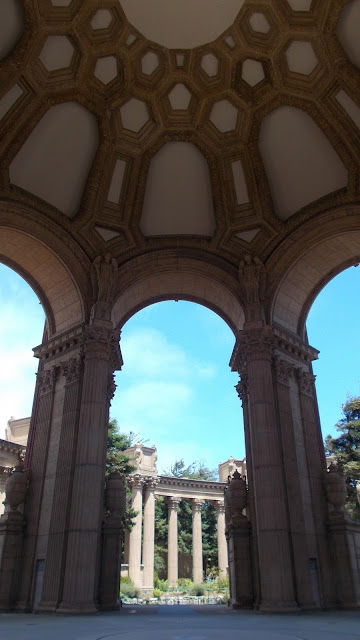 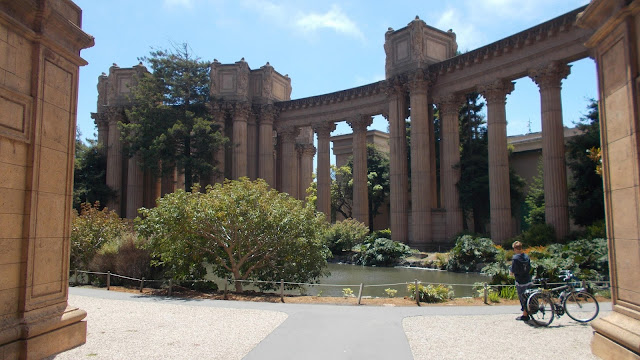 There was a bit of sea mist hanging over the Golden Gate Bridge, so we took a leisurely ride through the Presido until the mist cleared enough for our ride across the bridge. This park  has so much to look at...an old fort with historic buildings which now houses all sorts of things including the Walt Disney museum, a war cemetery, and endless trails to explore. But our goal was the ride across the Golden Gate Bridge. 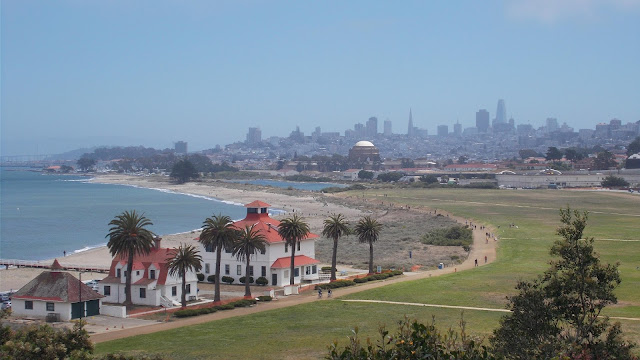 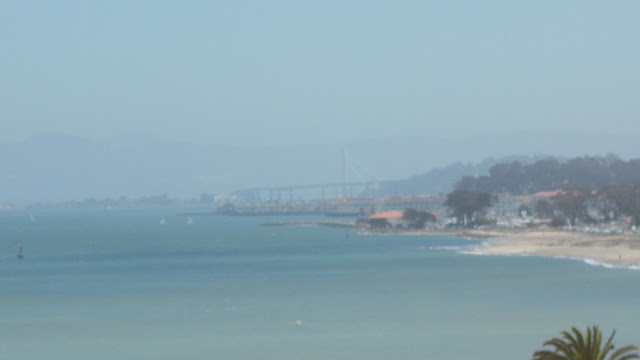 The mist lifted enough for us to see the bridge and view. They do this odd thing on the bridge and only open one side for both pedestrians and cyclists, even though they have walkways on either side. At certain times of the day both sides are open. As you can imagine its a popular tourist thing to do and I managed to ride across without wiping out anyone. It was only crowded at either end, seems like most pedestrians are too lazy to walk all the way across, but we rode the whole length both ways. 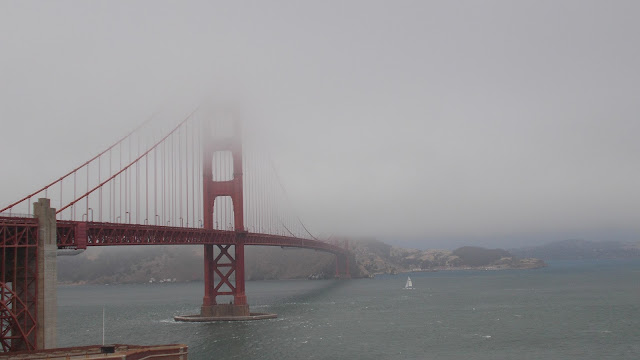 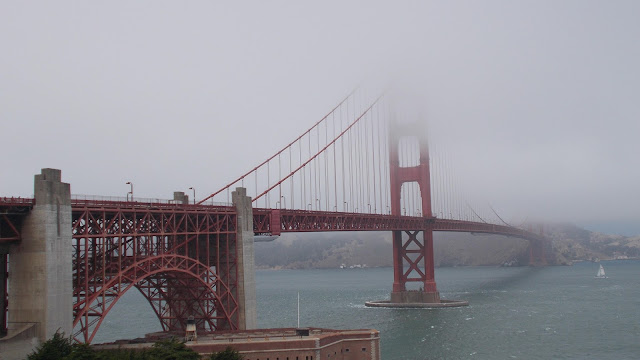 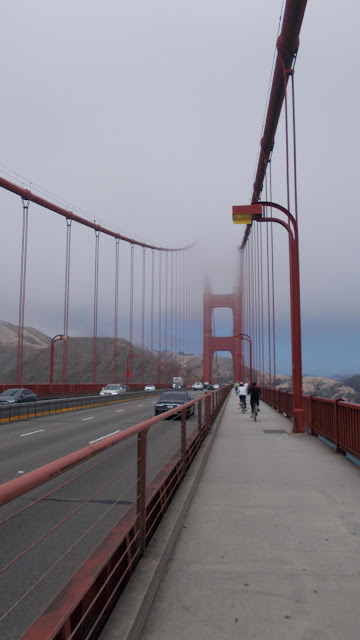 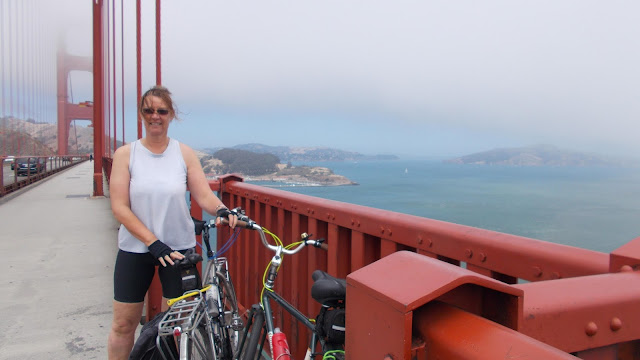 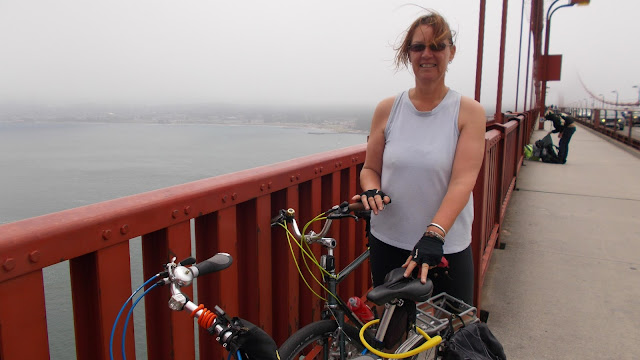 By then it was time for lunch so we headed off to the Golden Gate Park via a grocery store for picnic supplies and sat watching the bison while we picnicked. 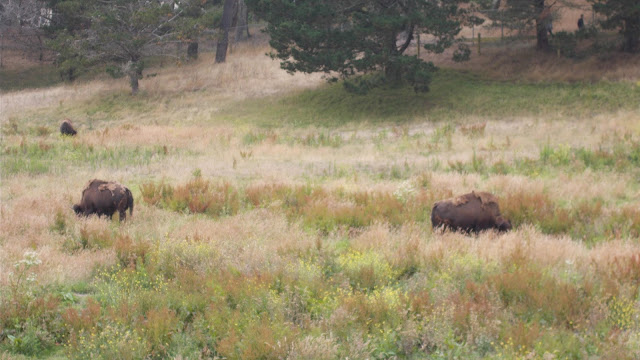 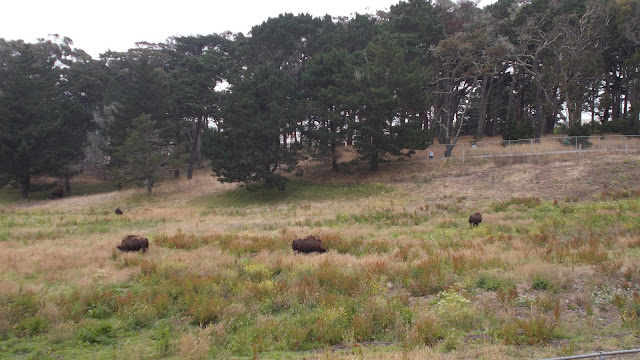 Golden Gate Park is huge, you could easily spend quite a few days here riding around and checking out all the museums and galleries, as well as heaps of trails. 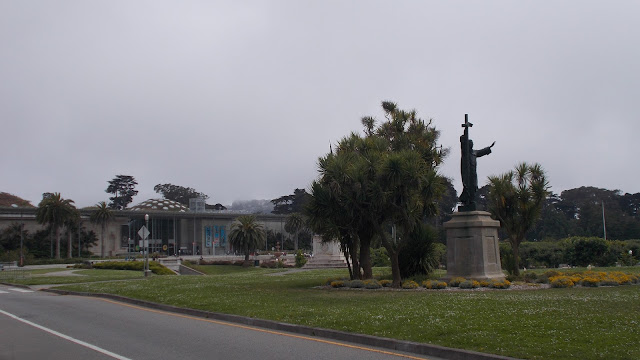 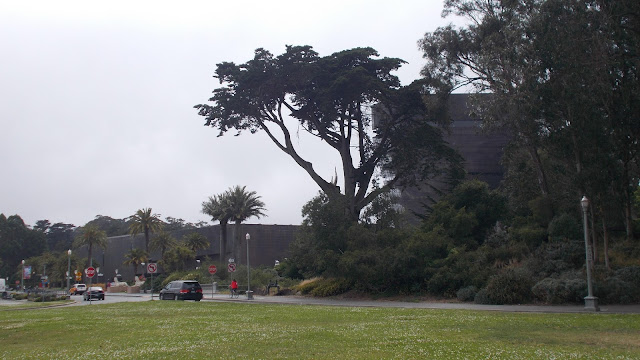 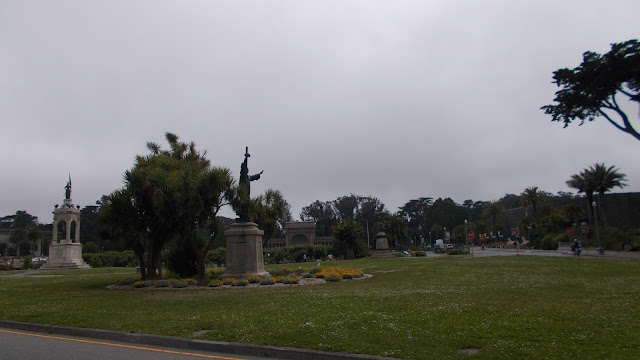 I never thought I would be comfortable riding around a big city since all my riding is done on quiet country roads with none or very little traffic. San Francisco was such an easy city to ride around, it really caters for bikes. Of course it also helped that I had such a great guide in Tiff. She rides everywhere and her business is a non profit bike shop.
People donate bikes, or the police ring her with ones they find and she restores them, then gives them to people who can't afford a bike or people who have lost everything in fires etc. She also sells some bikes (she does have to pay rent and feed herself after all!) so if you are in the market for a great bike check her out at Bay Area Bicycle Rescue.
She really looked after me biking around, made sure I didn't get stuck in traffic or hit by a car. 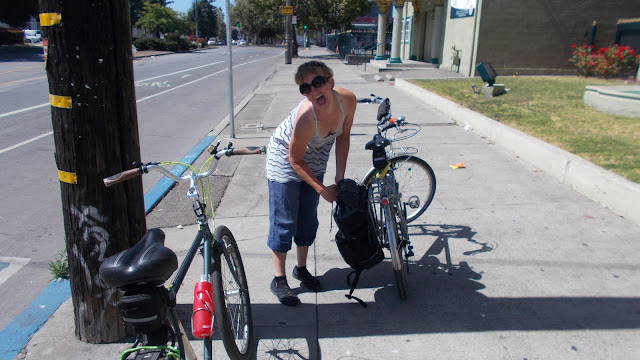 Once we had our picnic it was time to head off to the ports. Tiff's father Kevin works on a huge ship that was in port and invited us over for tour. We went via the famous street that houses the Painted Ladies Victorian Houses. 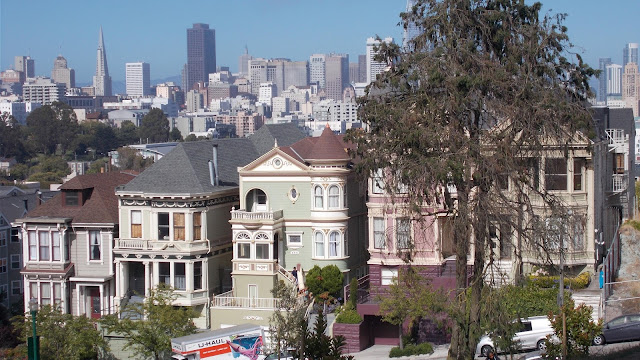 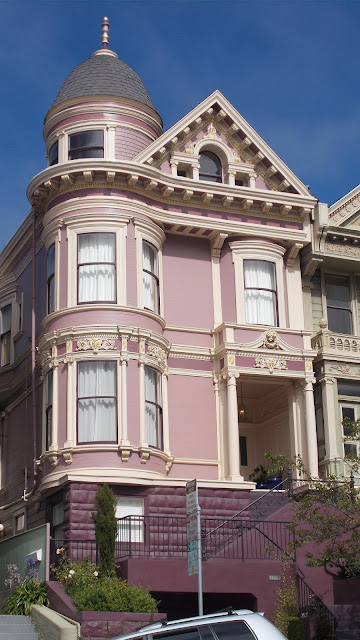 Kevin is in the merchant navy and the ship is used by the navy to transport all types of vehicles to where they are needed. It was tied up right next to its sister ship which we had to walk through then cross onto Kevin's ship. It was an extremely long way down to the water! I had never been on such a huge cargo ship (or any ship) in my life. The engines alone are five stories high!
It was so cool being shown around and we got to meet the Captain and have dinner in the galley. They do eat well on these ships!
Thankyou so much Kevin for taking the time out to show me around. 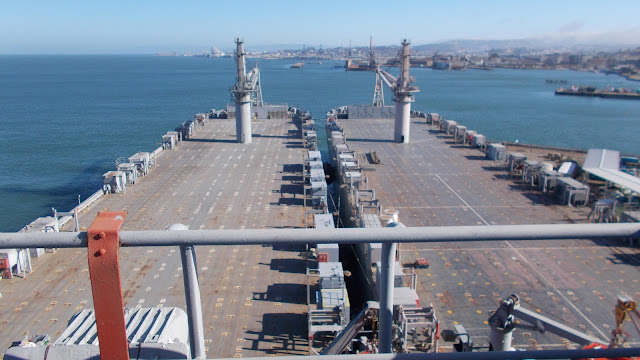 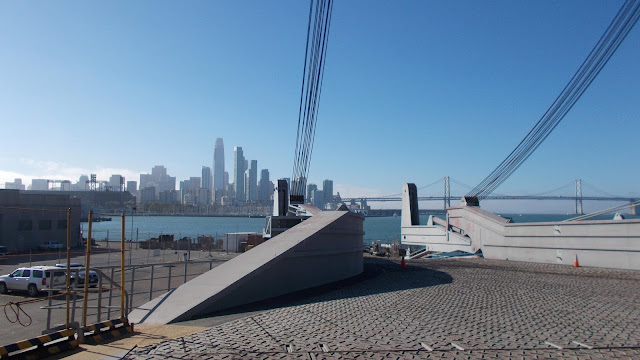 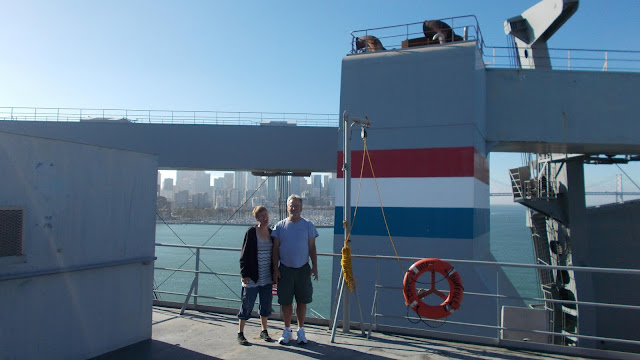 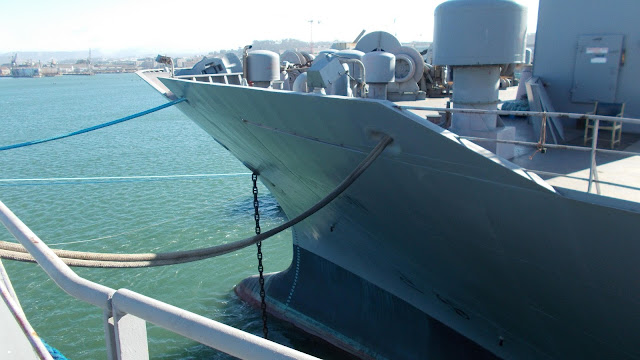 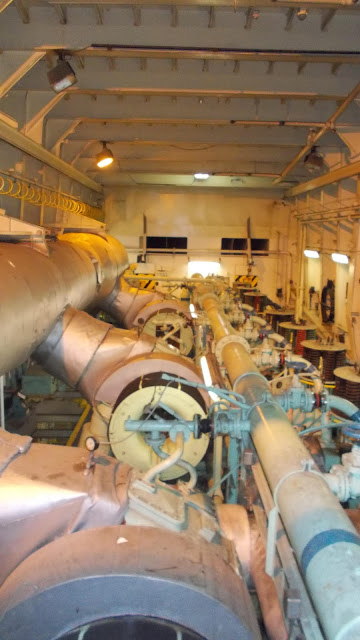 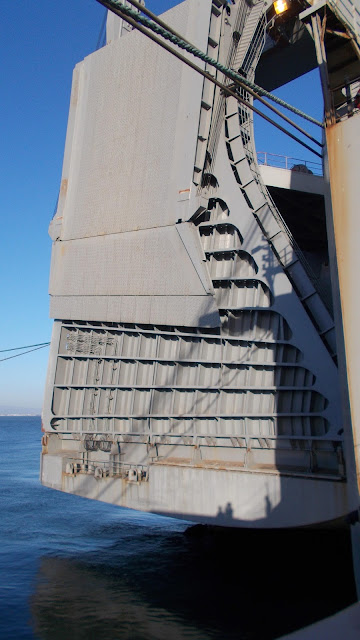 After our dinner in the galley, Kevin kindly gave us a lift home. I was feeling pretty tired by this time. We had biked and explored for nearly 9 hours, but Tiff had one last place she wanted to show me...The Morcom Rose Garden in Oakland. It was beautiful and the sun was just setting when we got there...perfect time and all the roses were out. I forgot to take my camera though!

Thank you Tiff for a fabulous day and two great nights sleep!!! I had such a wonderful time with the perfect bike tour guide and was sad to say goodbye to Tiff and Whiskers, but I'm sure we will meet up again one day. 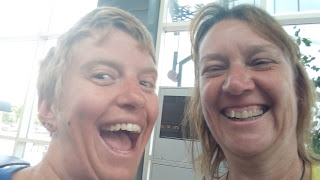 Tomorrow its time for another train trip...this time to Paso Robles to be reunited with Birdy, and I managed to book into a campground out of town, so my last two nights camping....or so I thought.