I was looking forward to getting on the road today. Being stationary for 2 days is a good attitude adjuster, and Birdy and I were itching to be heading out.
Day started out with some gorgeous coastal views before heading inland. 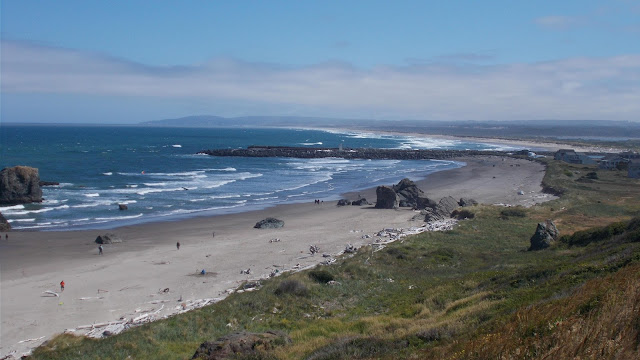 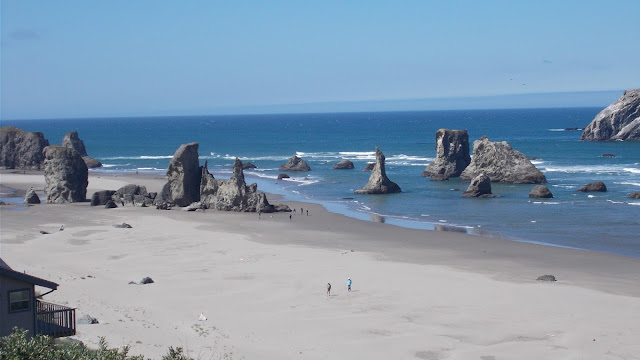 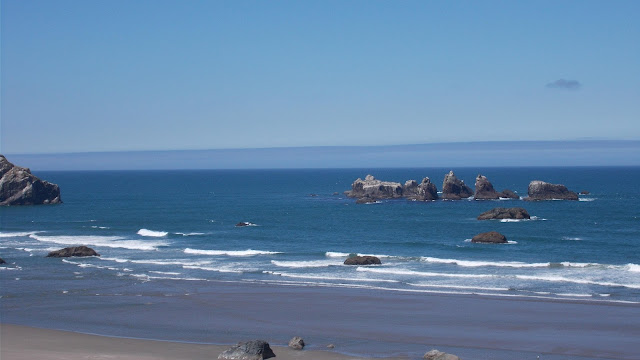 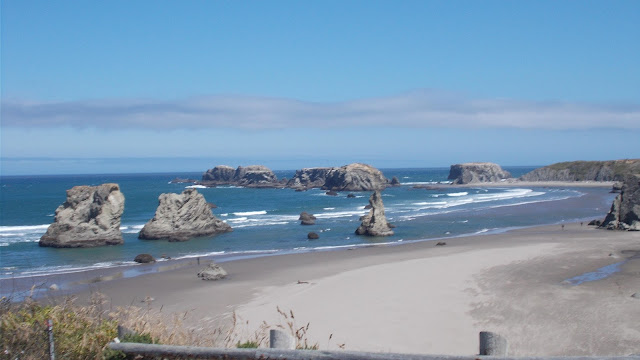 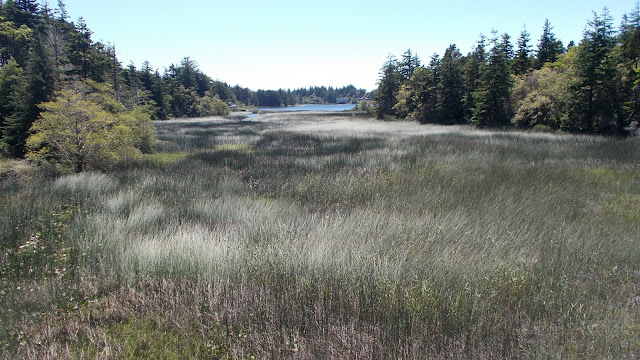 Saw a lot of other touring cyclists on the road today... its odd some just ride past you without even a wave or a hello. I always like to yell out a hello at least to another cyclist regardless what side of the road they are on.
Stopped at the world famous town of Langlois. Why is it world famous? I have no idea except the sign said so! Also home of the "best hot dog you will ever eat" so of course I had to try one and I think the jury is out on whether it could be classed as the best.

It was a lovely days ride, not to hilly and lots of quirky sights to keep me amused. 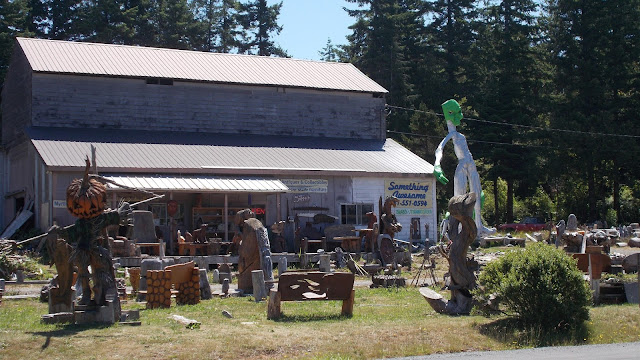 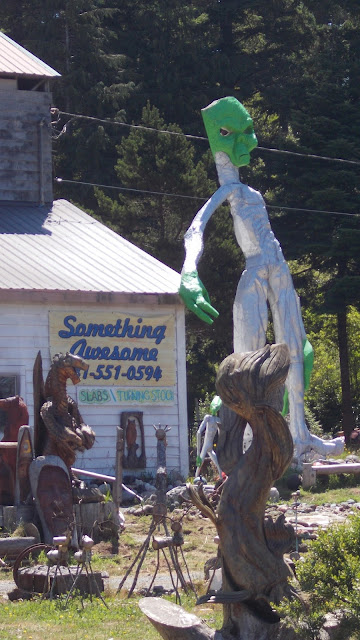 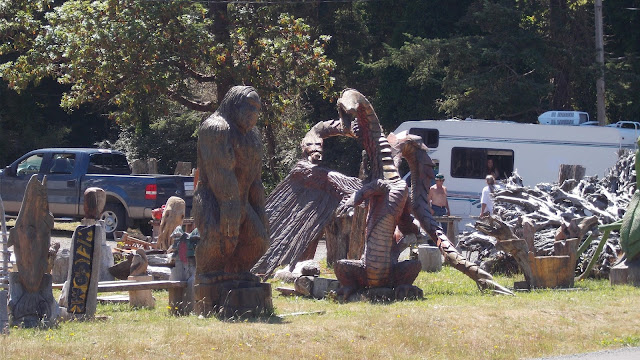 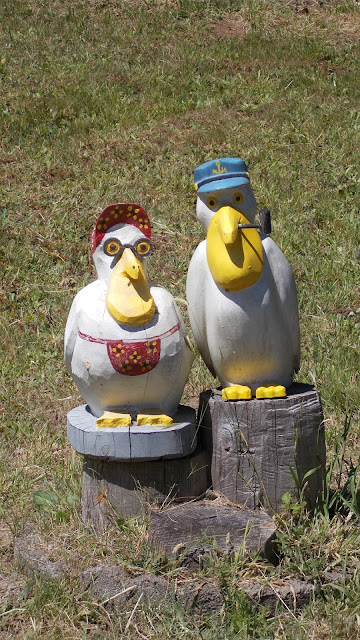 Got to Humbug State Park and there were quite a few touring cyclists there already. There were individual sites and only a couple were free when I got there. A bit later on three more cyclists turned up and no free sites, so since I was the only solo camper I invited them to share my site and that is how I met Axel, Kevin and Walter. Axel was from Switzerland and travelling solo, Kevin and Walter were from California. By the time Axel and Walter put up their tents on my site (Kevin had a hammock he slung up), there was probably only a couple of feet between each tent. Made for an interesting night when both of them snored, so I had stereo snoring! 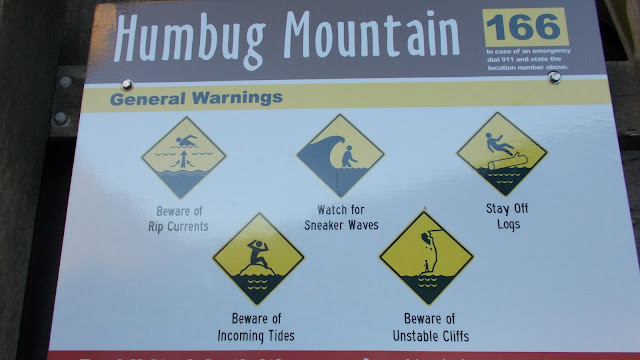 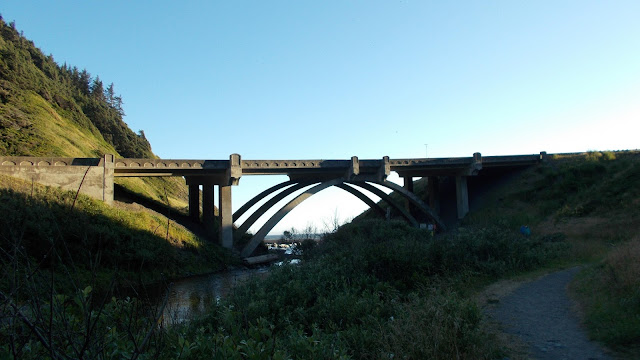 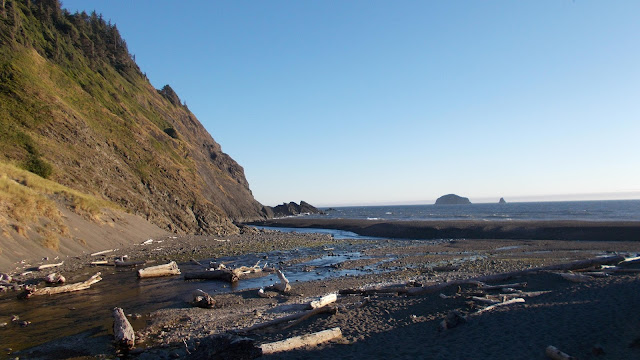 You can just make out the smoke from a campfire at the hiker biker site in the photo below...left of the road sign. So nice to be tucked in the trees but unfortuntely it was a bit too shady, so the mosquitoes quite liked it. 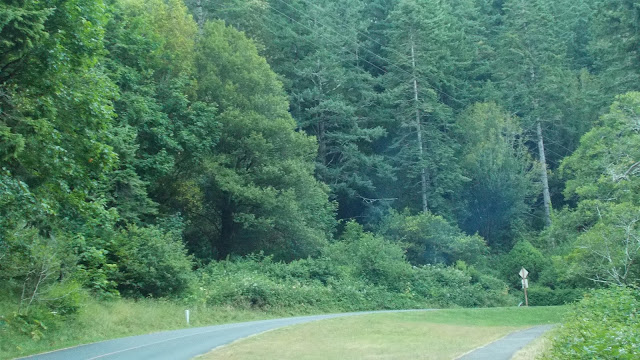 Woke up early and decided to head to Harris Beach state park for the night...a 90 km day and my last campground before crossing into California! Not far from Humbug State Park I passed these guys by the side of the road. 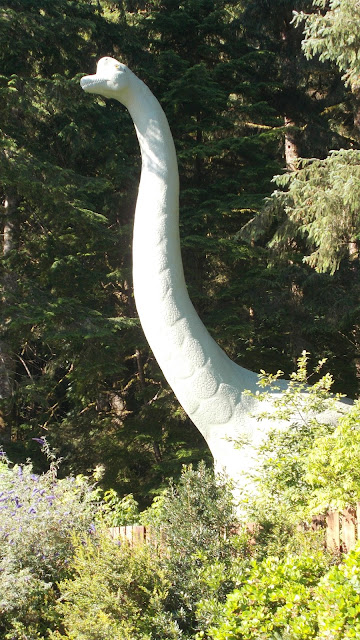 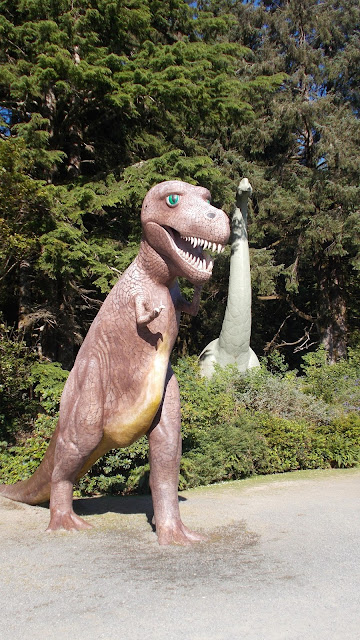 The road pretty much followed the coast today with a few hills, one slightly larger hill but nothing to bad and some spectacular views. I really didn't stop that much today, it was one of those days when everything felt right and riding was pure pleasure. 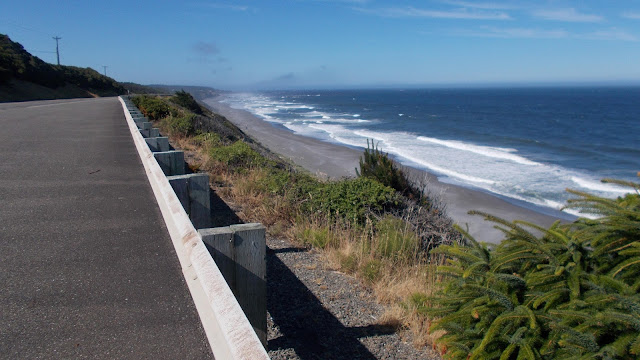 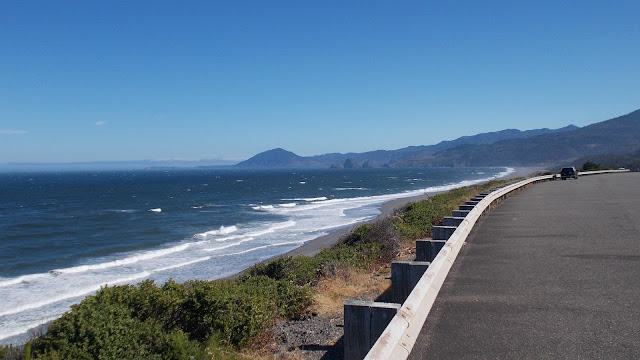 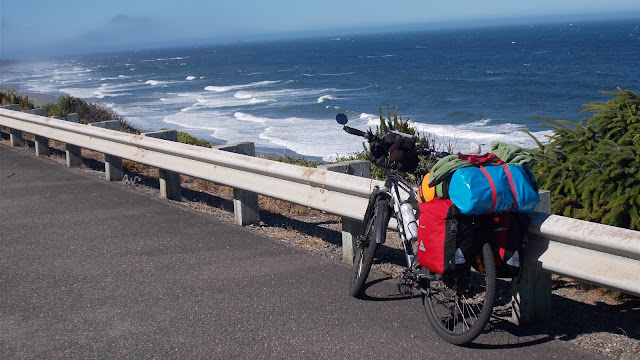 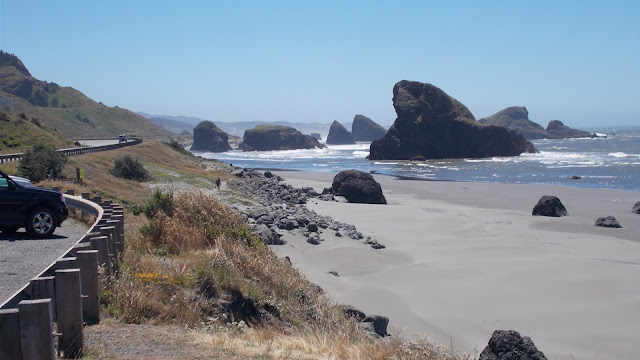 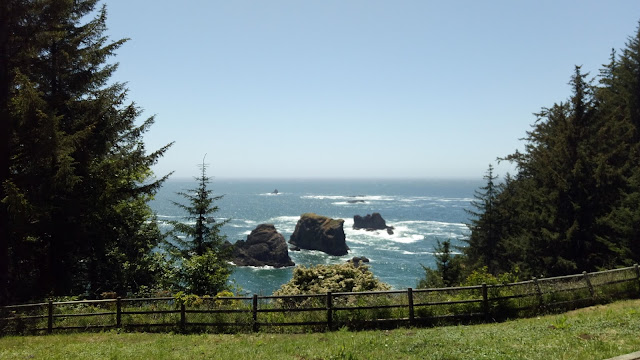 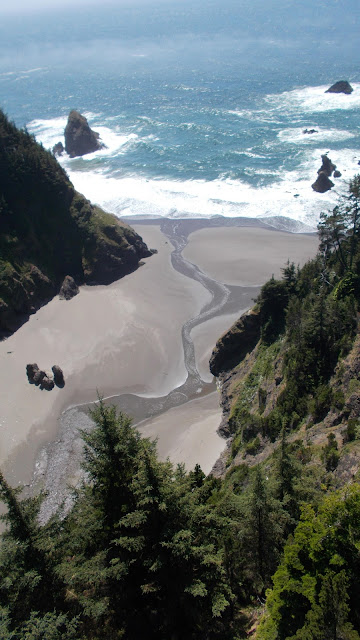 Harris Beach State Park was pretty crowded with holiday makers for the 4th of July celebrations the next day. I decided I didn't want to be on the road that day and would spend 2 nights at Harris Beach. When I got to the hiker biker site all the cyclists from last night were there as well as others. Most were taking a rest day as well. It was such a fun night, all sitting at a big long table, sharing food and drink, chatting away and since dope is legal in Oregon, there was quite a bit of that going around as well.
Following day was relaxing on the beach reading my book then rode into Brookings for supplies and wifi and ran into Axel. We decide we would have a BBQ that night so went shopping for 2 big juicy steaks!

That night at camp all the Americans showed us how to celebrate the 4th of July...they had bought ingredients to teach us non americans how to make smores...graham crackers, chocolate and marshmallow. So delicious!!!
I can't even begin to describe that night, under the influence of too much of everything of choice, we all had such an awesomely funny time. It really was one of those nights that you just had to be there, and it will stay in my memory and make me smile for a very long time. Thank you so much guys and especially Kevin, Walter, Arianna and Canton, that had to be THE best rendition of the national anthem I have ever heard! The decent photo is courtesy of the wonderful Claire. None of mine turned out as you can tell! 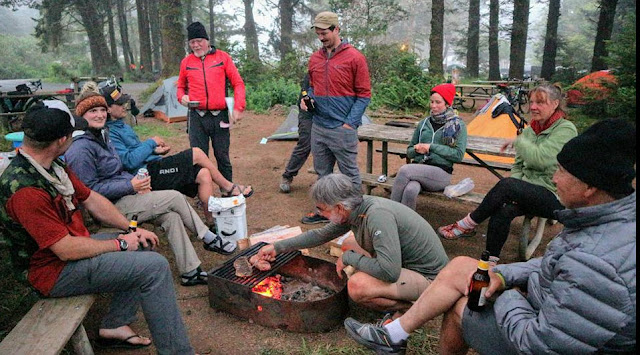 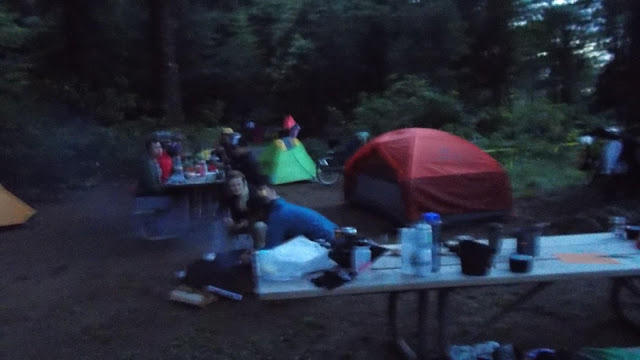 The previous day riding I had felt my back niggling at me on the hills and knowing that the next days riding had the steepest hill yet out of Crescent City, I made the decision to ride into California, then catch a bus from Orick to Elk Prairie Campground. (For those of you who don't know me well, I had back surgery a few years ago.) The last thing I wanted was my back to go out on me again, so I had to be sensible.

Once I got on Birdy I did feel like I could keep riding all day. I was sad to be leaving Oregon behind, it had been such a wonderful trip down the coast and the campgrounds were great, definitely love to go back one day and do it all again. But maybe it was the people that made this part of the trip so enjoyable as well. I feel like my trip has had two very distinct parts....the first few weeks on my own and no other cyclists, and then meeting and making new friends all the way through through Oregon. Both have been as good as each other.
So goodbye Oregon and thank you for all the good times. 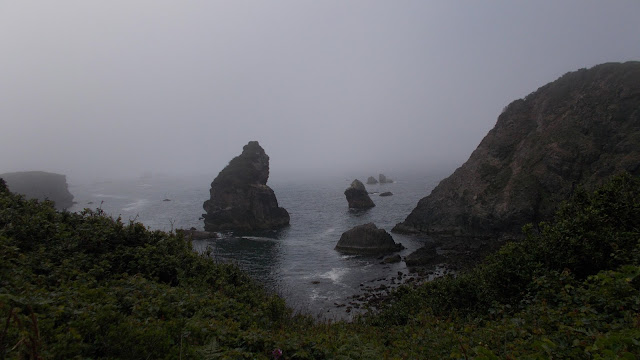 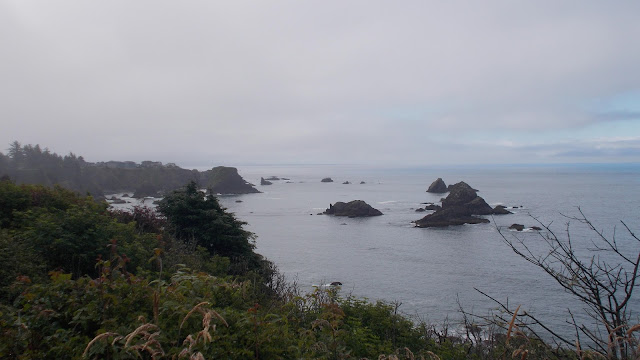 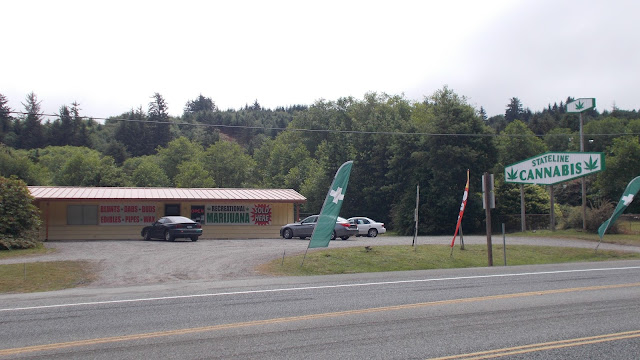 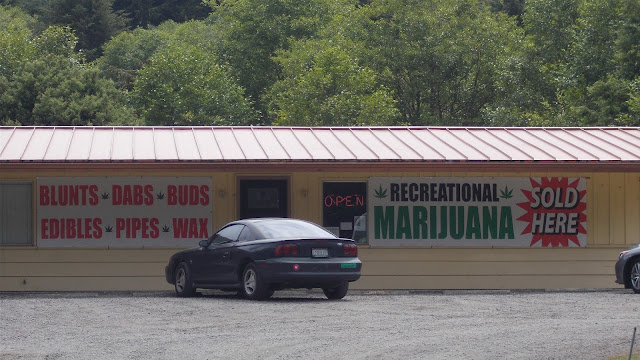 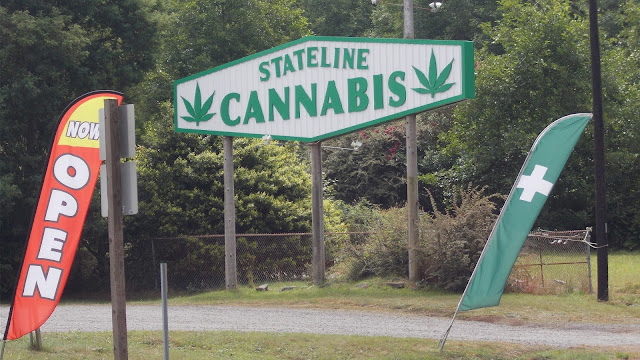 And hello California...I think every touring cyclist takes this photo! 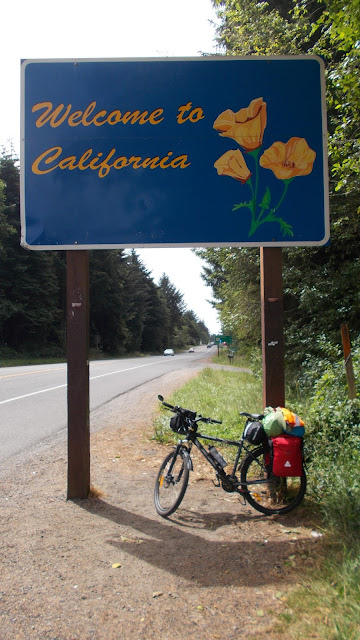 My first view of the Californian coast. 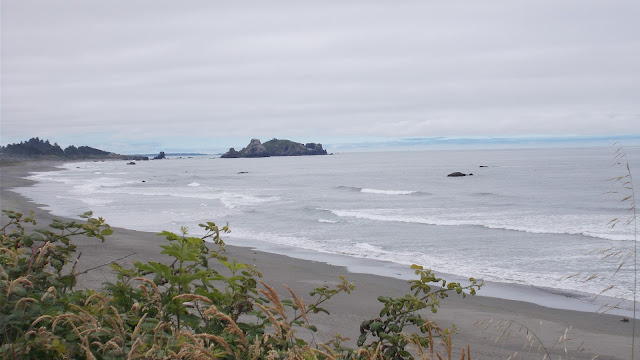 The bus trip was slightly uninspiring until we got to the redwoods. Oh my god...just driving down to Elk Prairie in the bus and seeing these amazing forests of gigantic redwoods was amazing. I couldn't wait to get off and go for some walks and see these mighty trees close up...but that will have to wait until the next post.