Elk Prairie State Park is beautiful. There is an actual prairie field and it is home to the Roosevelt herd of elks which number about 30. There were also a few baby elks about but you could only ever see the top of their ears peeping out of the long grass. 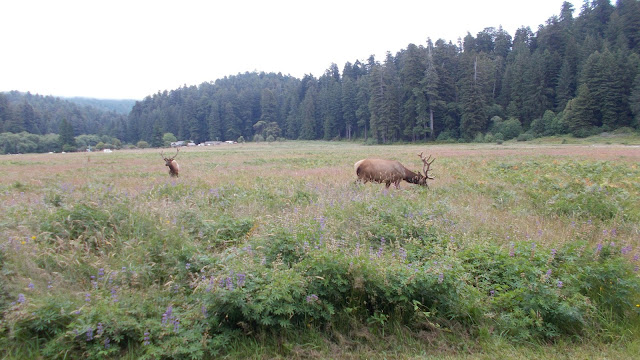 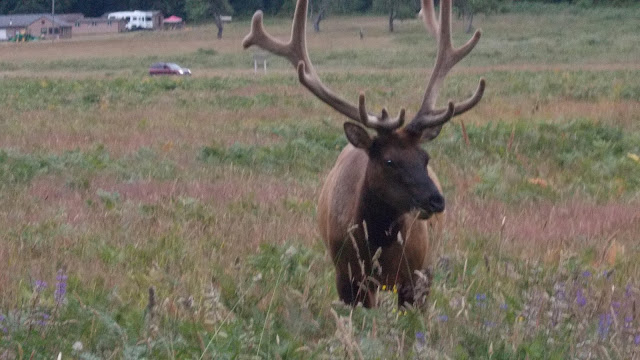 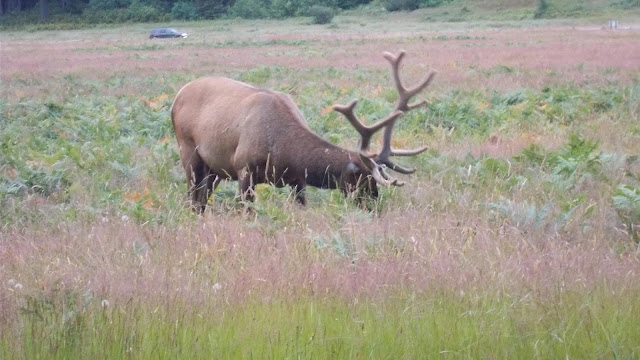 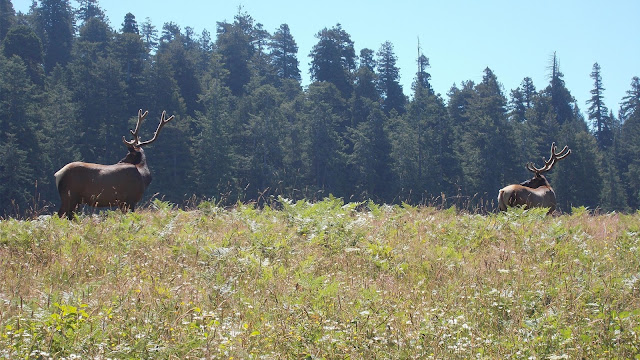 After getting to Elk Prairie I had another change of plan. I had intended to stay one night then head onto Eureka and get down to Humboldt State Park for a couple of nights, then back to Eureka to send Birdy to Paso Robles and catch the bus.
But I thought why do I need to see other redwoods when I am amongst such awesome trees now? So after sweet talking the park ranger, I was going to be able stay 3 nights in Elk Prairie. A lot of state parks have a minimum stay for hiker/bikers. I think its to make sure that homeless people and vagrants don't camp for long periods in the parks.
Claire had biked in the previous night and she was going to stay for the three nights too, then Axel biked in tonight and decided to stay a couple of nights! This was our little campsite. 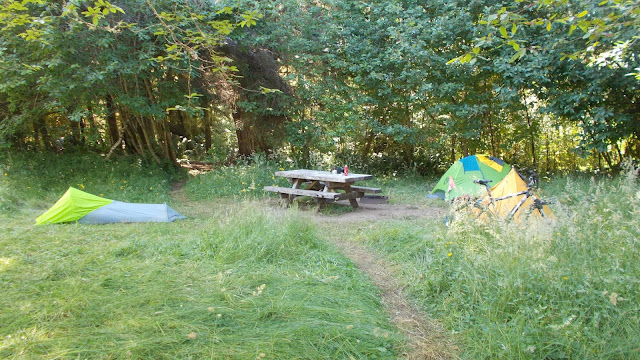 So my first day here I biked into the nearby town and got supplies. It was a beautiful ride through the trees on a trail for most of the way. 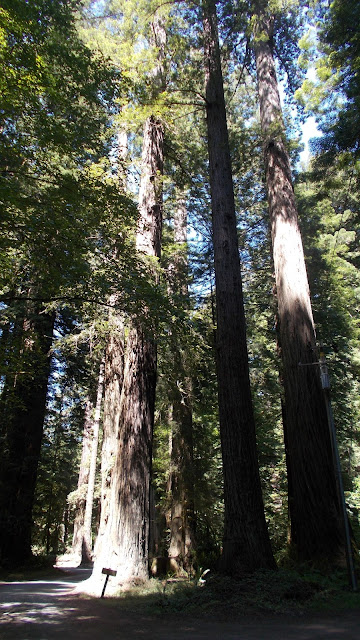 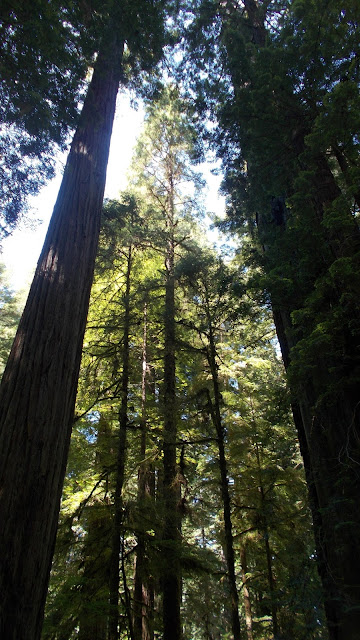 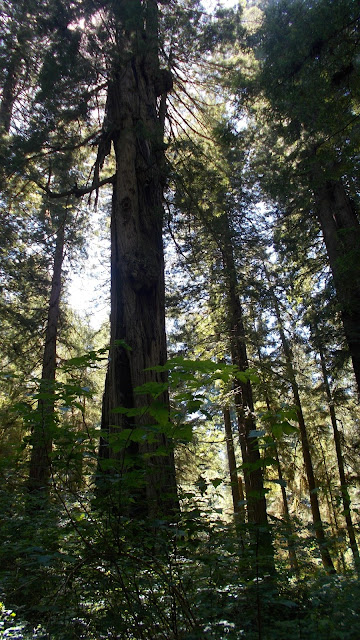 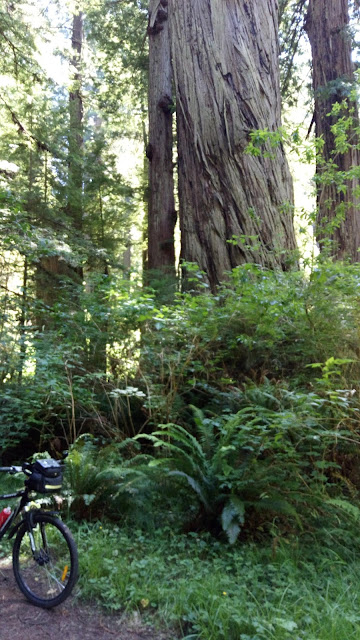 Then I spent the afternoon walking the trails through the redwood forest. I can't even begin to describe the feelings I had seeing these enormous, beautiful trees. There is such a sense of being in a very special place, a vibe that the redwood forest has that moved me to tears. I found it a very calming place, a place of security and reflection. Of course the biggest tree has noise and people, but out on the trails there was no one about, just me, the trees and the critters. 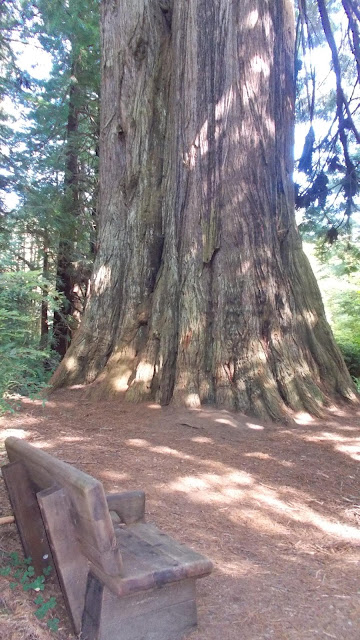 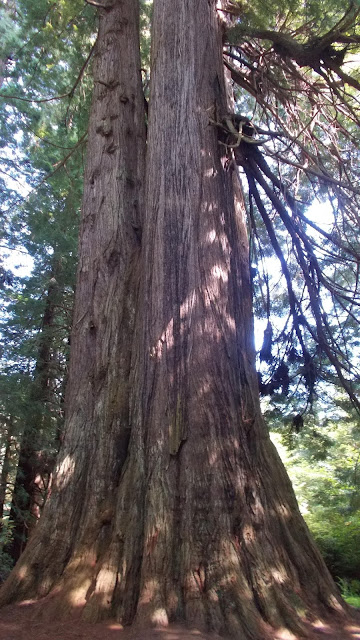 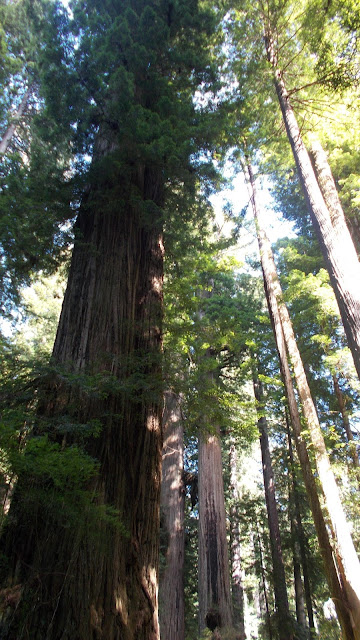 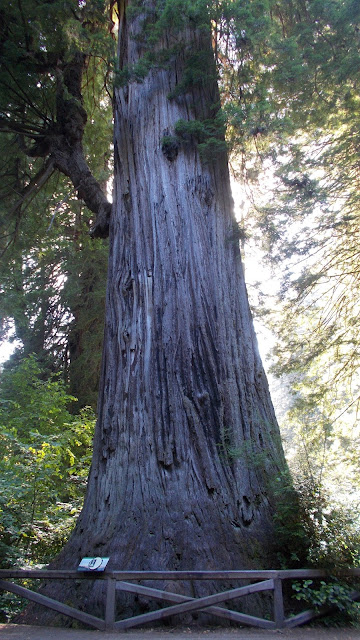 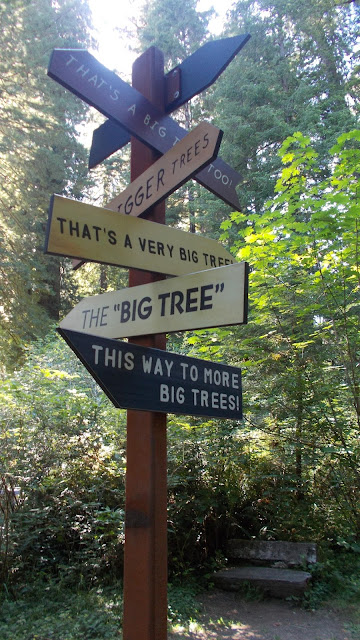 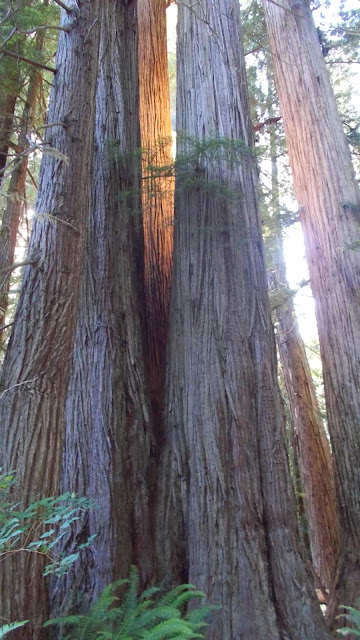 I met this young guy at the campsite...Corey. He was travelling the coast on his bike with his board just surfing and enjoying life. He said no one spoke much to him until he wrote a sign on his board cover! I admired the fact he was biking with a surfboard, considering some of the winds I had encountered, it would have been hard work at times. 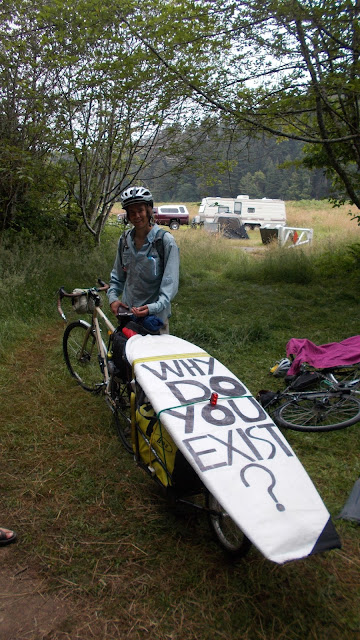 One morning while I was camping here I got up about 6 am to head over to the amenities block. There was a circular grassed area, surrounded by a small road you walked down to get to the block. This particular morning about 12 big elks were grazing in the grass, when I started to walk back the path was blocked by elks! I had to calmly walk around them and one big elk and I were eyeballing each other. He would have been only 10 feet away from me!

I spent one day riding a trail to the coast and to a place called Fern Canyon. It was featured in one of the Star Wars movies...had some kind of craft zipping through it in the movie. The ride itself was great through the forest, good mountain biking track but no too difficult, just fun. The coastal ride was a bit uninspiring. A lot of the time you couldn't see the beach. Fern Canyon itself was very pretty but crowded. I think with less people it would be stunningly beautiful but I find it hard to appreciate places when they are full of noise and people. I did see some lovely bright yellow banana slugs here though! 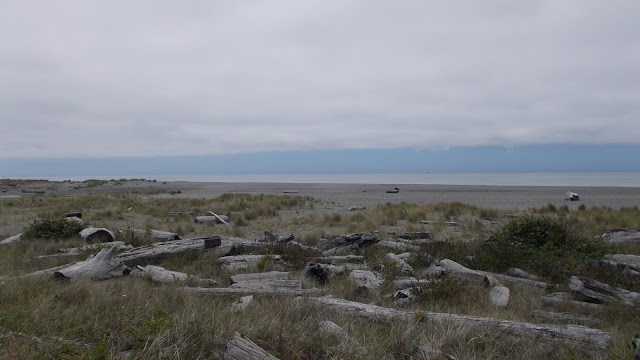 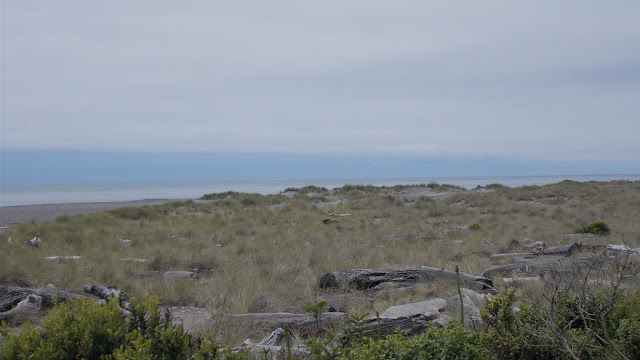 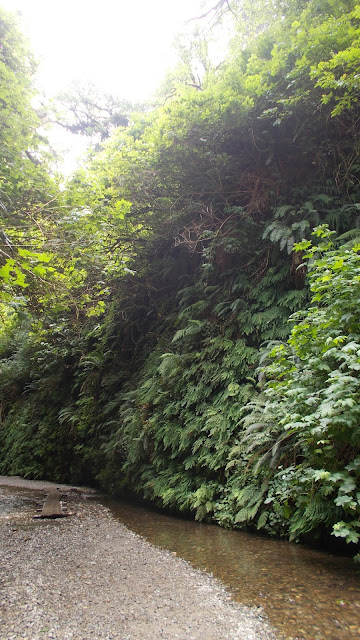 I really loved my time in Elk Prairie and glad I decided to stay the three nights. Sharing the campsite with Claire and Axel was great and we had some lovely quiet pleasant evenings of chat. I was sad to say goodbye to them...they are both really good people and hopefully our paths will cross again one day. 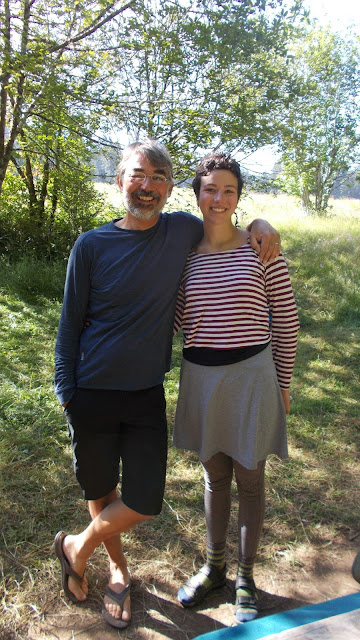 My last morning morning in Elk Praire and I wasn't in any hurry. All I had to do was ride into the town of Orick. I had decided to get a bus to Eureka and had organised a Warmshowers place to stay.
I was feeling kind of sad with the realization my bike tour was nearly at an end but I still had more travels to look forward to before I flew home.

Arrived in Orick and had hours to wait for the bus so found a nice comfy tree to sit under, read my book and watch the world go by. While I was sitting under my tree, a woman sat down on the other side of the road with a fur coat which she proceeded to drape artistically over a post and place a handwritten for sale sign on it. She must have sat there for at least 2 hours and no takers.

I also had a visit from two sheriffs...they were concerned that I was waiting for someone I was biking with and were going to go and look for them. Once I told them I was just waiting for the bus, we had a lovely chat about redwoods and New Zealand! I was most appreciative of their concern for me.

The bus trip to Eureka was interesting as all trips are through places you have never seen before. I had been warned about Eureka...not the most salubrious of places and a big problem with tweakers. (I had no idea what a tweaker was so had to ask someone at camp...a tweaker is a meth head, a drug user.) I was told never to leave my bike unattended and if possible just ride straight through.

Well...I got dropped off at the bus depot and luckily there was a guy who had been hiking getting off the bus too. He said to me I will stay with you until you get your gear loaded onto the bike. It was then I noticed a couple of odd looking sorts kind of circling around me, so I was thankful for his company and kindness.

I got out of Eureka pretty quick and found myself cycling along this lovely back road through the countryside on my way to the Warmshowers host place, and what a wonderful place...Albert and his wife Marina have 25 acres and part of that is just for cyclists! A great outdoorish kitchen, bunkhouse, huge vegie garden, cows, chickens and a yurt! Albert offered me the use of the yurt and it was great. 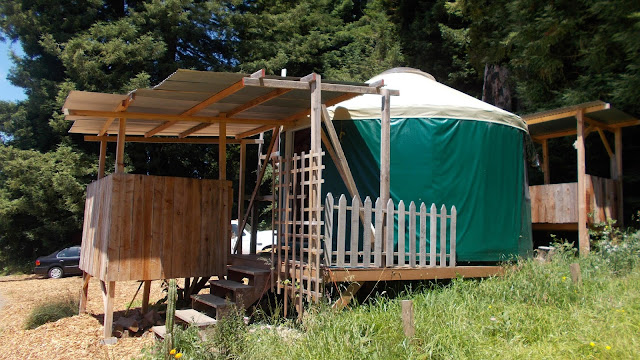 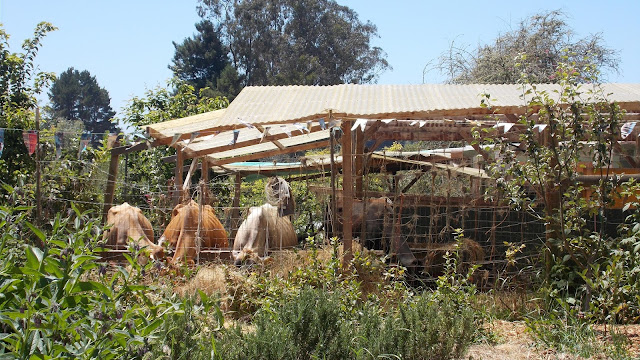 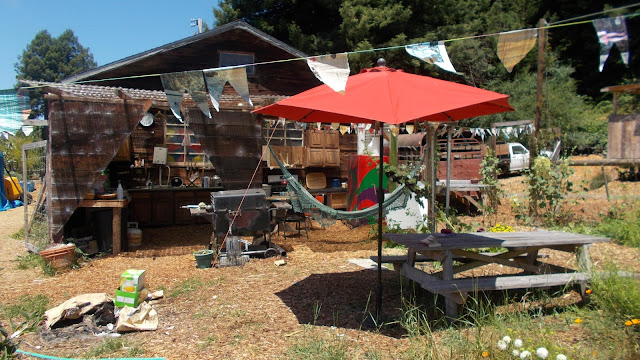 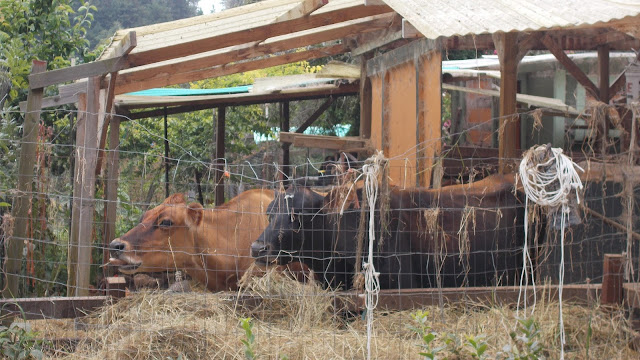 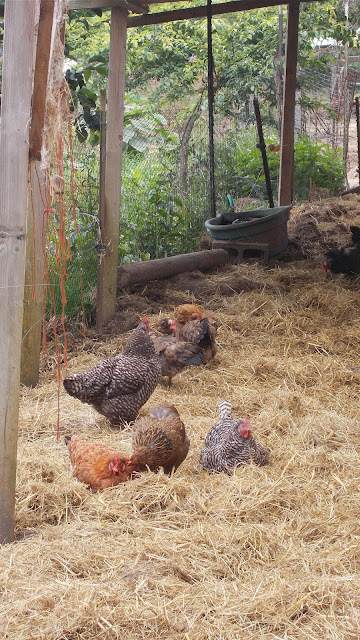 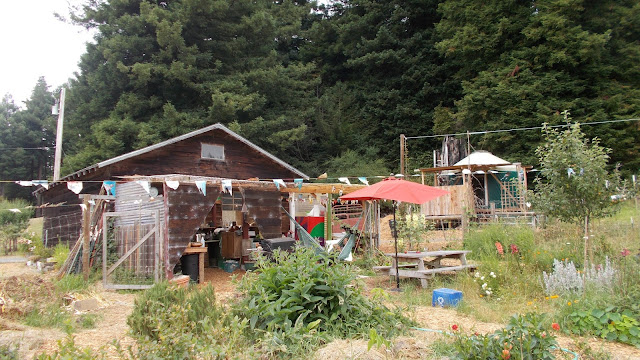 Photo below is of the shower, and the next photo is the view from the shower. Not many places you can shower and stare at redwoods. 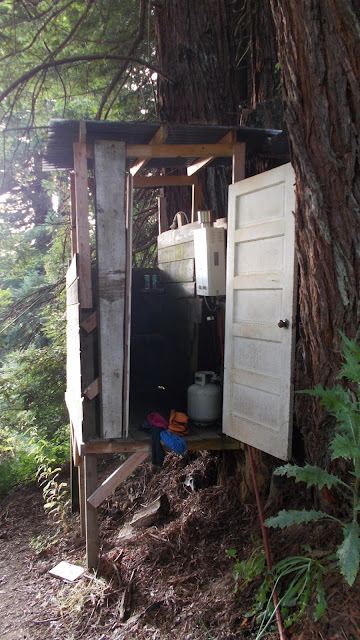 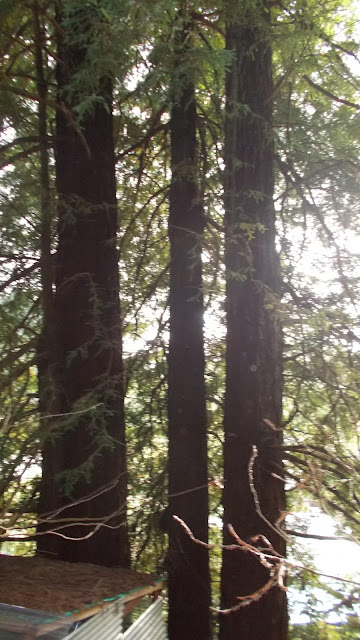 I had planned on staying here for 2 nights, then ride into town, box Birdy up at the bike shop and send her on her way and then stay in a cheap motel for the night before the bus/train/bus to San Francisco. Albert was concerned about me staying in town and said I would be safer here and it was no problem if I wanted to stay an extra night or two, so that is what I did.

So to cut a long story short...I stayed three nights at Alberts farm, rode into Eureka on my last day and arrived at the bike shop that Alan had talked to who said "yeah, no problem boxing up a bike".
The young mechanic guy was great BUT the shop manager needs an attitude adjustment. He told me no we don't box up bikes anymore since a few days ago so can't do it, when I said well if you can give me a box I can do it if I can borrow a tool to get my pedals off. He then says no we don't lend any tools!
I stood my ground and luckily he was about to head off for the day so left. The mechanic was great once he had gone and boxed Birdy all up for me. Albert came into town and picked Birdy and I up and we headed around to Fed Ex to send her off to Paso Robles.

Next day Cass....a woofer on Alberts farm, drove me into Eureka to get the bus to San Francisco. I can't thank Albert and Cass enough for their help and kindness to me.

When I booked my ticket on Amtrak I was told I would need to take a bus, then a train and then another bus and that the train doesn't take bikes hence having to fed Ex Birdy. Well I had a fabulous bus trip, really enjoyed it and got to the train station and found out I could have taken Birdy on it!!!

So that is how I ended my bike tour. I didn't make it as originally planned to Santa Barbara, I didn't even make it to San Francisco but I got further than I ever thought I would....over 1700kms and one flat tyre.

I learnt a lot on this trip...
I found out how resilient I am
That porridge every morning for 2 weeks is enough
Not to be afraid of the unknown, embrace it and enjoy it
True friends have your back and are there when you need them
Raccoons and squirrels are cheeky little critters so watch yourself and your food
Adventure makes you feel alive and happy
Majority of people are kind, friendly and curious
Never pass a bakery without stopping
and an awful of other stuff that will just bore you.

I met wonderful people, I enjoyed myself every day, even the days when it was hard going or I felt lonely and I would do it all again in a heartbeat! 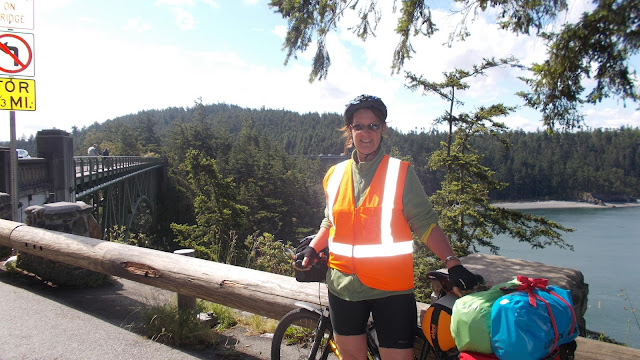 And now my San Francisco adventure begins with Tiff and Whiskers!