The Oregon Coastal Bike Route really is great to ride. Pretty much had a good shoulder all the way today and even with a lot of traffic on the road it wasn't uncomfortable. Yes the constant traffic noise does get to you and I know some cyclists wear ear plugs, but I would rather hear what is coming up behind me.

I didn't take many photos today.

I was looking forward to getting to Tillamook. Ever since I had started planning this trip I had heard about the Tillamook Cheese Factory and as Brett said "Tillamook sounds like fairy town name".

Well I got to Tillamook....rode right past the cheese factory. The car park was full of RV's all wanting to get their freebie cheese. The town of Tillamook itself is nothing at all like a fairy town! and I couldn't wait to bike through it. I did stop and eat a burrito from a mexican food truck though, and it was very, very good.

I arrived at Cape Lookout with plenty of the afternoon left, so it was good to catch up on washing and then sit on the beach and read my book. Brett was camping there along with a couple of others from the previous nights camp. 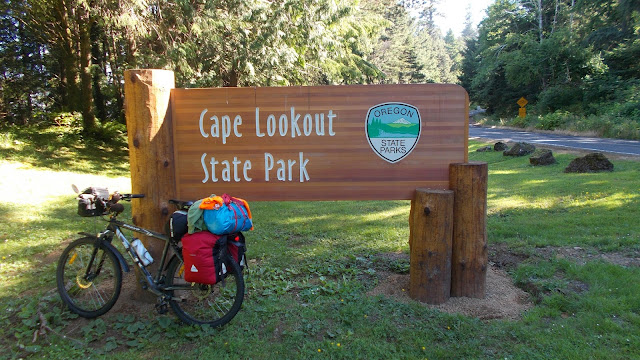 So here are some pictures of Cape Lookout State Park, just to give you an idea what the state parks are like. This one had a wee amphitheater for talks, all the state parks seem to run some sort of educational programs for adults and children and some even have stages for concerts. 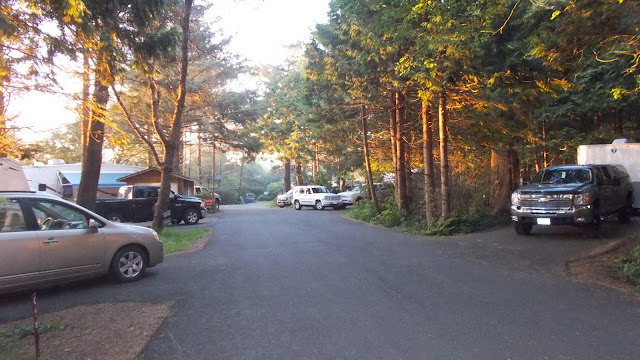 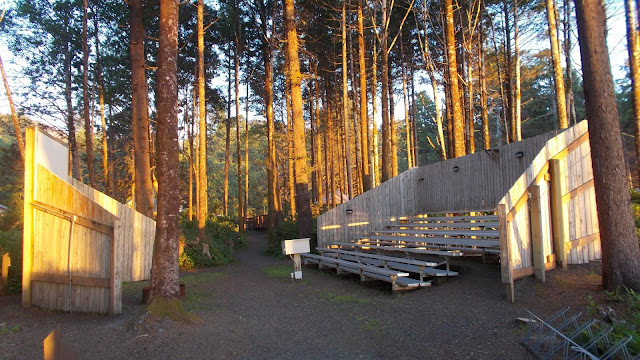 Quite often the hiker biker site is located furtherest away from the amenities block, but that also means you do get lovely sites with no RV's right next to you crowding you out, and Cape Lookout was exactly like that. You can just make out my pink towel drying at my campsite amongst the trees. 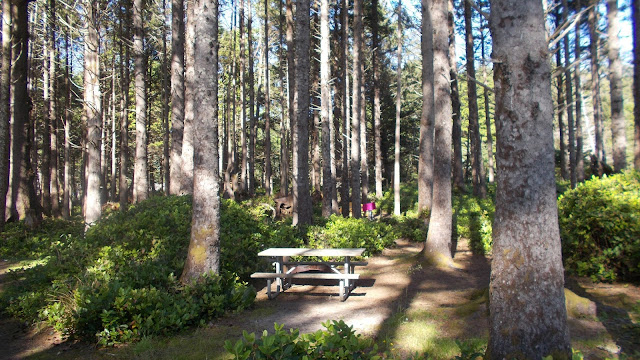 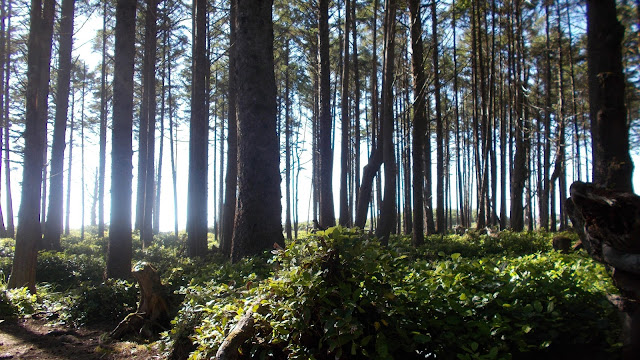 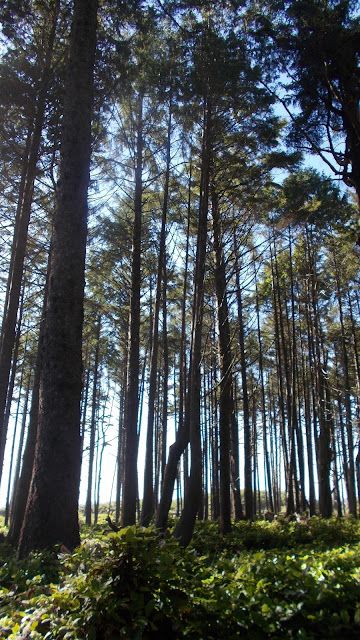 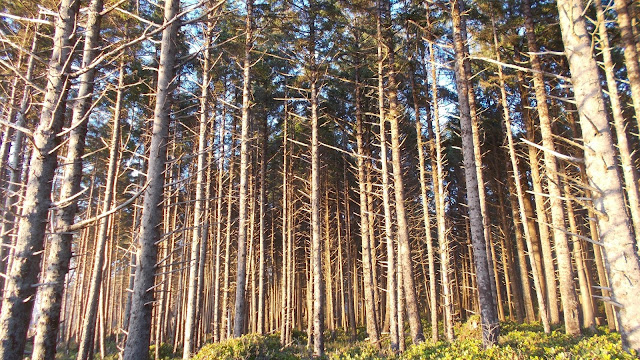 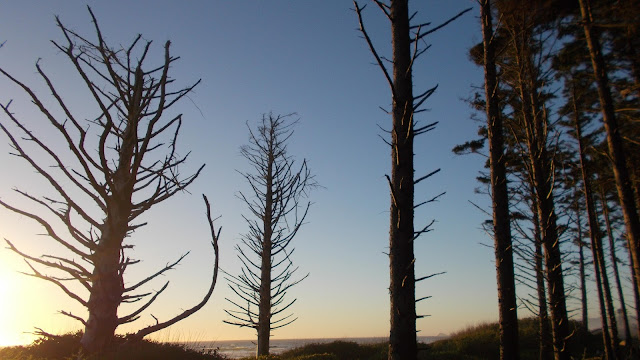 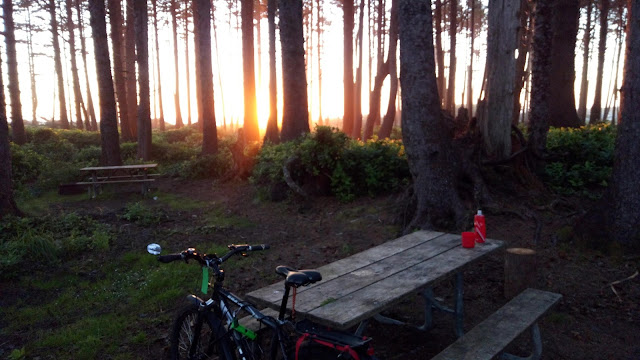 Woke up bright and early, I knew today I had a couple of big hills to tackle and the first one was right after I left camp... 1000 ft climb over 2.7 miles. The hills are so different than the hills at home. These are long slow gradual climbs whereas at home most of the hills are a lot steeper and shorter. I didn't find the hills on this trip a problem at all, even with 20 kg on Birdy. 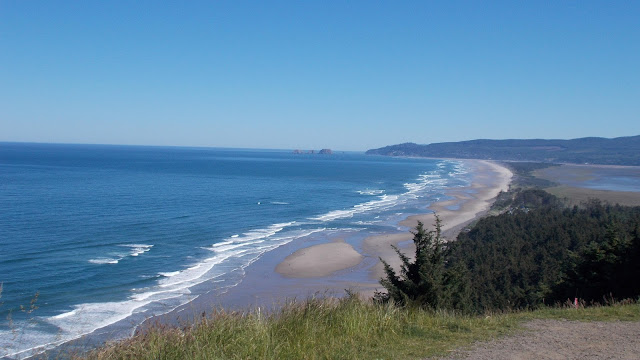 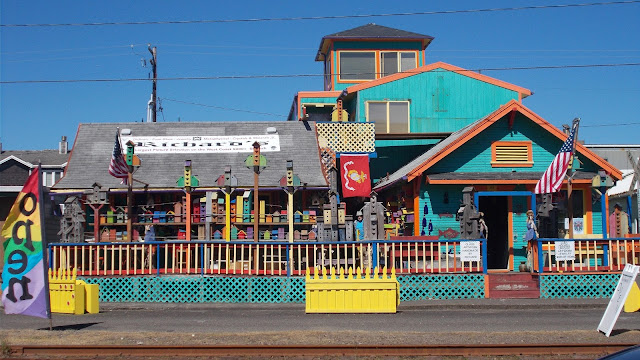 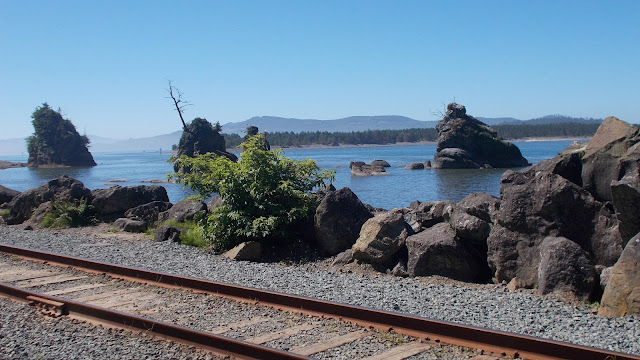 The road was pretty busy today...it was Saturday and there were a lot of cars with trailers, RV's and pickup trucks. Most seem to be carrying dune buggies and I found out why. I was passing through Pacific City and Cape Kiwanda and there are these sand dunes that people roar about on their dune buggies.

They also like to park their cars all over the beach...the car park was also full to the brim. They did have a great brewery/cafe here...The Pelican Brewery and since I was really hungry I treated myself to an overpriced but very good burger. 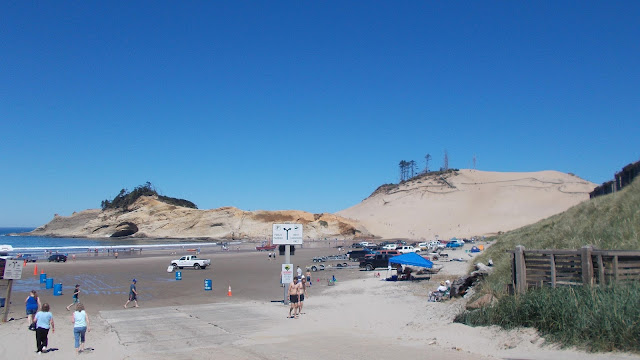 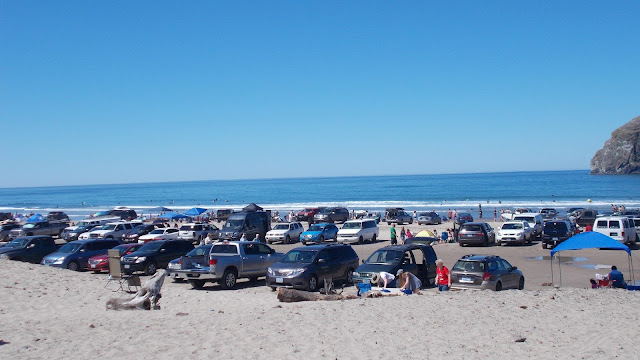 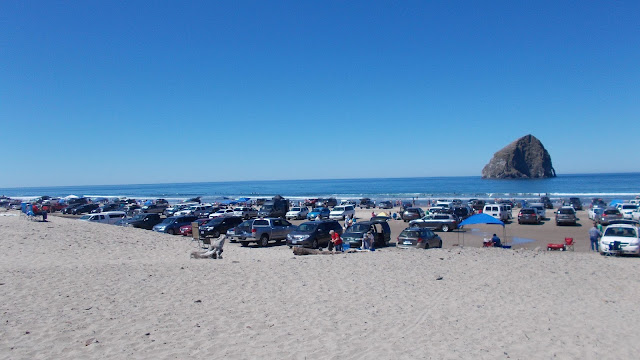 The day was really warming up and I knew I had one more hill to get over, my water was running low so I decided to stop at Neskowin to top up my water. There was a store and this was where I had my only accident on the bike. Its an embarrassing way to come off a bike, well I wasn't even on the bike! I had passed the turn off into the store so pulled off the side of the road and wheeled my bike down a small grassy slope. There was a narrow gap and as I wheeled my bike through it, I slipped down onto a woodpile and Birdy fell on top of me! A lady came rushing over to help me get Birdy up and we were both fine. I did end up with a whopping bruise on my thigh but I think my pride was more injured.

So after that and getting water I headed off towards Devils Lake State Park on the outskirts of Lincoln City. I still had one more big climb to do and the temp was now hitting about 36 degrees. I passed a very odd sight, well I thought it was odd...pine trees growing out of the sand. It looked so weird to me. 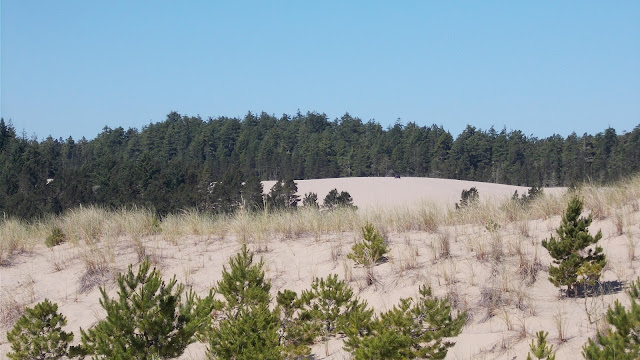 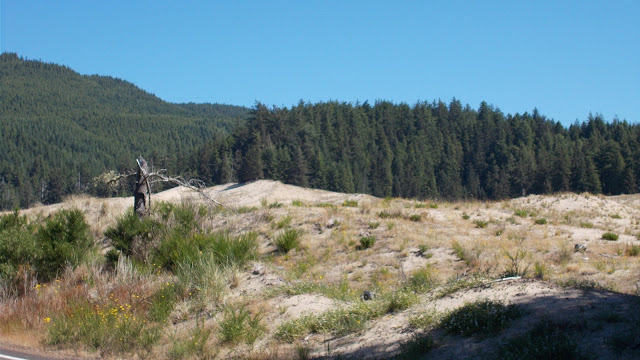 I made it to the top of the last big climb and sat down at a view point to recover and eat an orange. A guy on a road bike cycled up and starting chatting. It wasn't long before he was asking me if I knew all about the gospel etc. Now I don't mind what people believe, but when I am sweating like anything, hot, tired and just want to eat an orange and to be left alone, I don't appreciate someone thinking they have every right in the world to tell me what I should believe. Theres a time and a place and this wasn't it!

Finally arrived into Lincoln City and stopped and got some groceries. A lady at the supermarket told me it was 98 degrees today which is nearly 37 degrees Celsius, so no wonder I felt a bit warm! Missed the tune off to Devils Lake State Park as per usual, but people are always so helpful when that happens. This was a very odd state park...right on the edge of the city and the hiker biker site just a vacant block of land up the top of a path, surrounded by suburban houses. But it did have lockers with USB ports, a bike maintenance stand, tools and Brett was there! 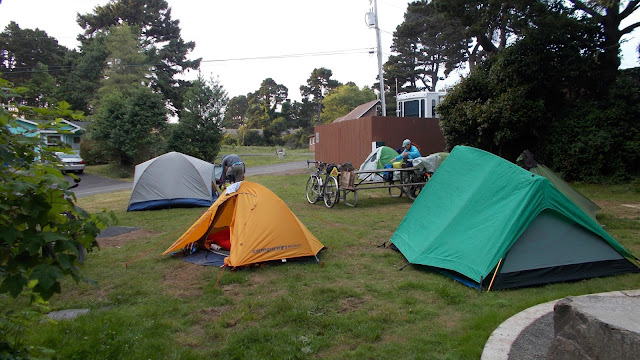 It was nice camping but being so close to town. There was a kite festival on in Lincoln City the next day so I decided to stay an extra night and check it out. There were huge kite displays and also displays of kite flying choreographed to music. Really enjoyed sitting on the beach for most of the day watching it all. 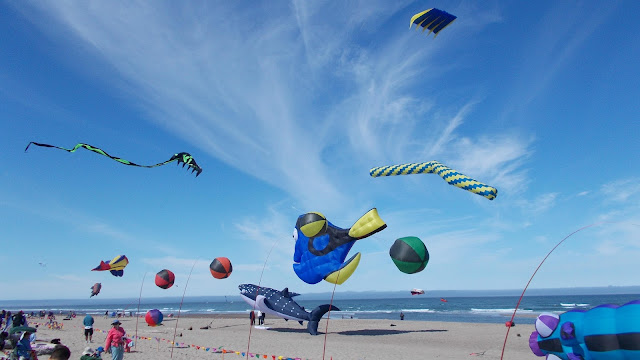 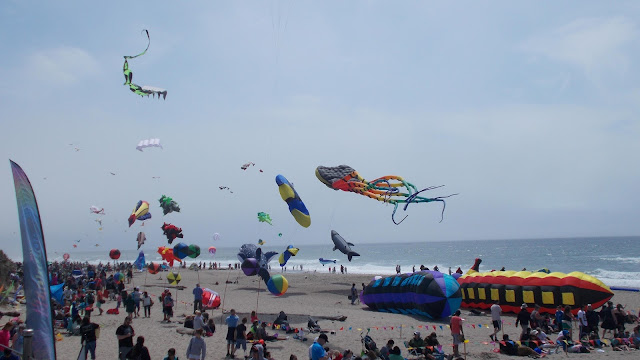 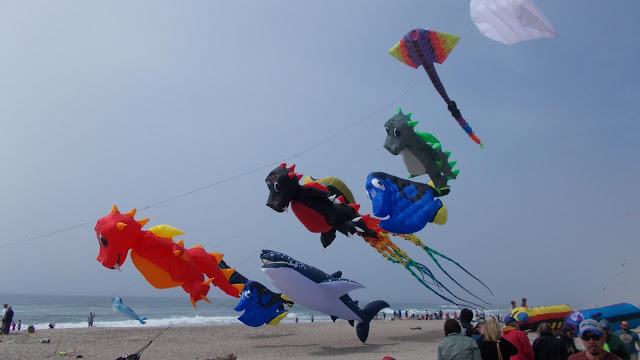 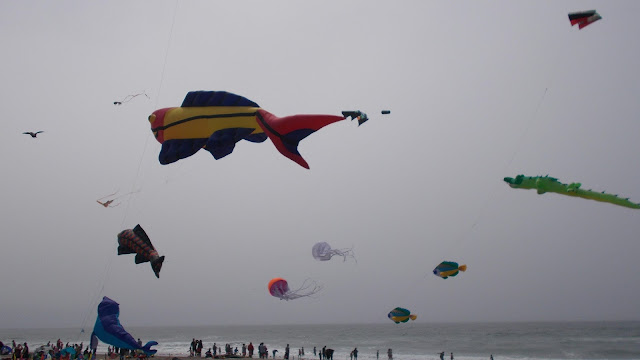 Christophe turned up at the campsite that afternoon so we all decided it would be good to have a pizza and beer evening around the fire. Another great reason to stay at Devils Lake state park...you can walk to the pizza place! I think it is often the people that you chat and camp with that makes a place enjoyable, just as much as the location. 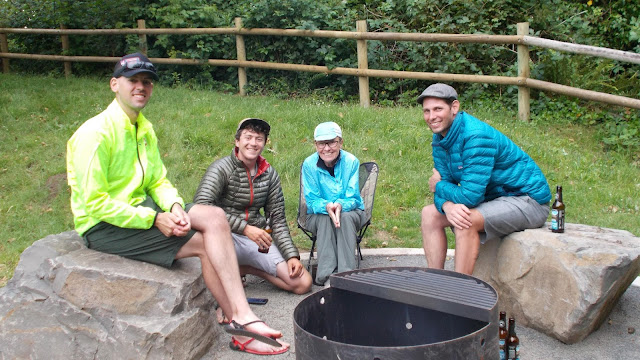 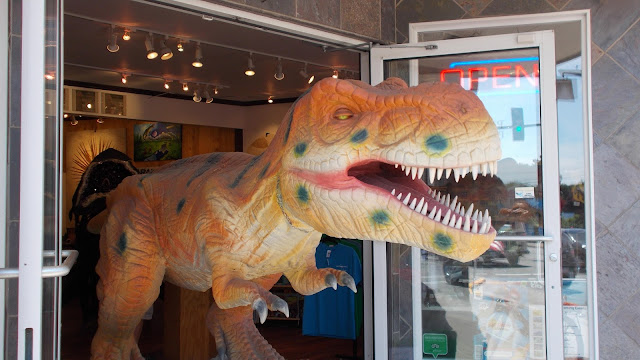 Woke up to a drizzly rainy morning and a wet tent again. Quickly packed up and headed off down the road to South Beach State Park.