This isn't a post about a long bike ride, more about a long weekend with a short bike ride. Mark and I headed off to Danseys Pass Camping Ground for a short break. What a great little campground! I highly recommend it. There is a beautiful river running right by and a really good swimming hole. The water was a bit too chilly to go swimming, but I imagine in summer in would be lovely. 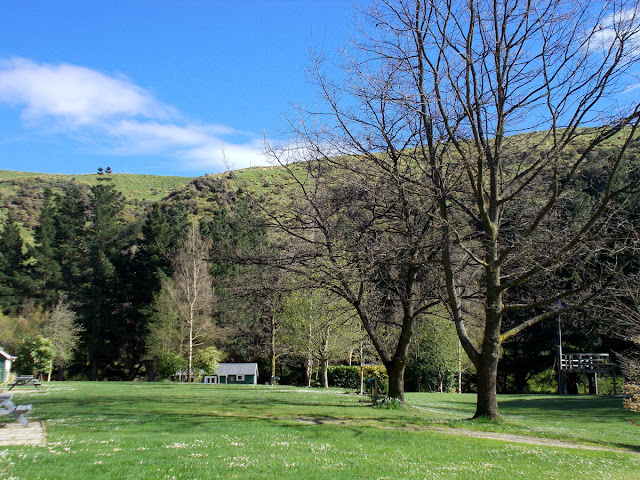 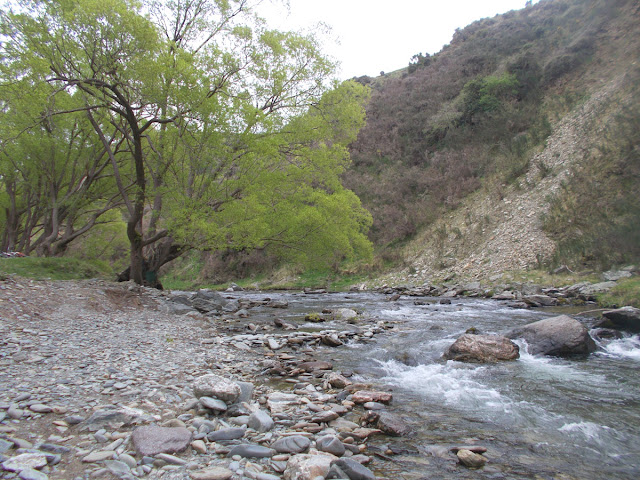 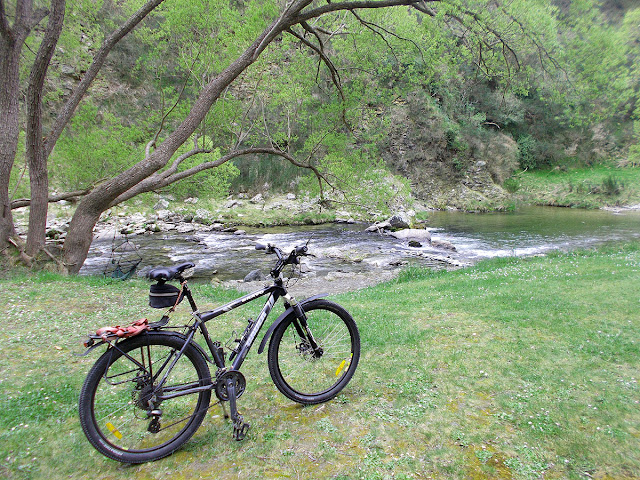 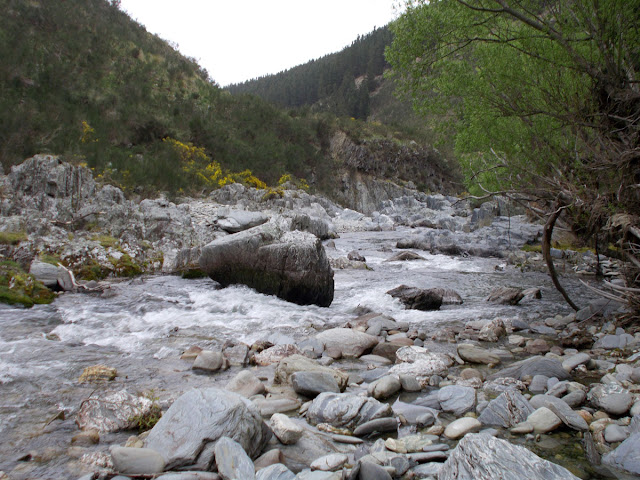 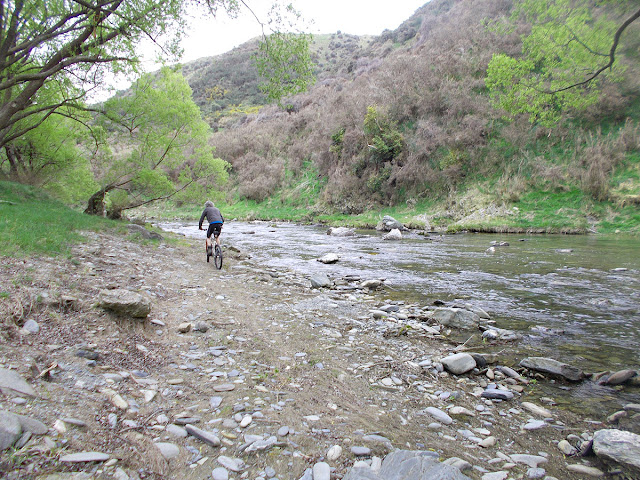 There wasn't bike trails to ride, so we rode around the campground and down along the river. Great fun for Mark who loves finding obstacles to ride over and banks to ride down.

The next day we loaded up the bikes and headed to Kurow. I wanted to check out part of the Alps to Ocean (A2O) bike trial that runs from Mt. Cook to the coast at Oamaru. Its in my plan to ride the whole 300km this summer, so this was a chance to check out just a small portion. First we headed past Kurow to the Aviemore and Wataki Dams, just to have a look at a couple of the campsites on the trail. 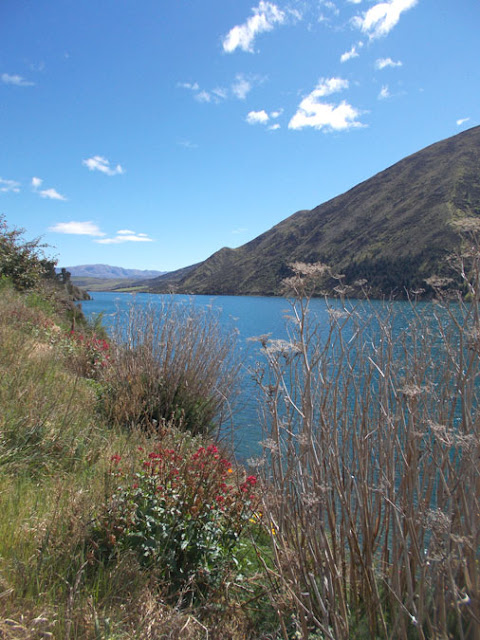 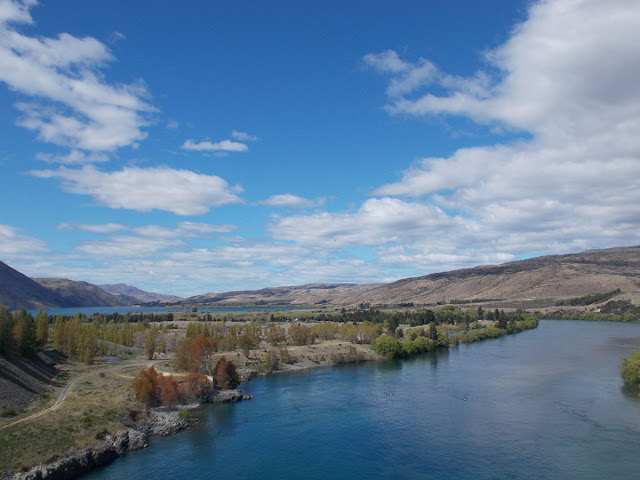 Then Mark dropped me off at Kurow and I headed off to Duntroon on the A2O trail, telling him "oh it will only take me an hour and a bit." The first couple of km's was very pretty following the river. I  wasn't too fussed on the surface on the trail, it was loose river gravel I think, and really slowed me down. 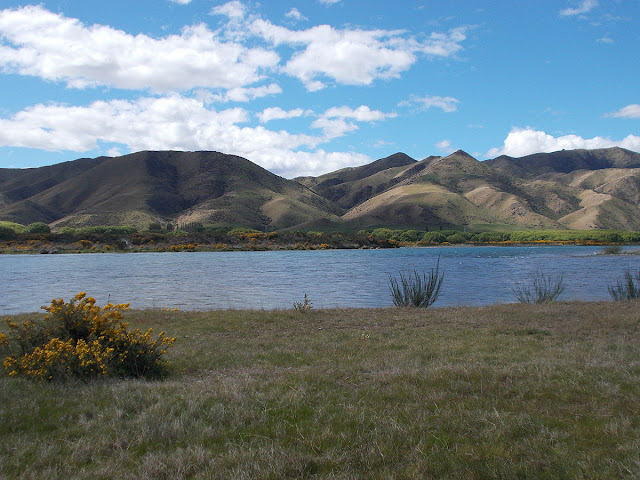 The trail then veered off to follow the road for a wee bit, then headed back through a vineyard and down near the river again. 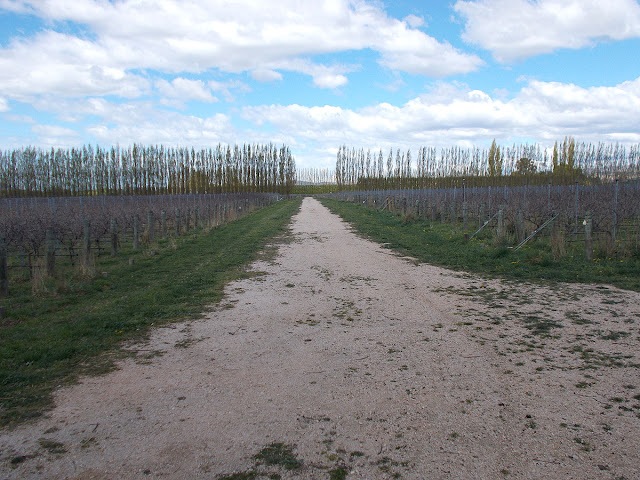 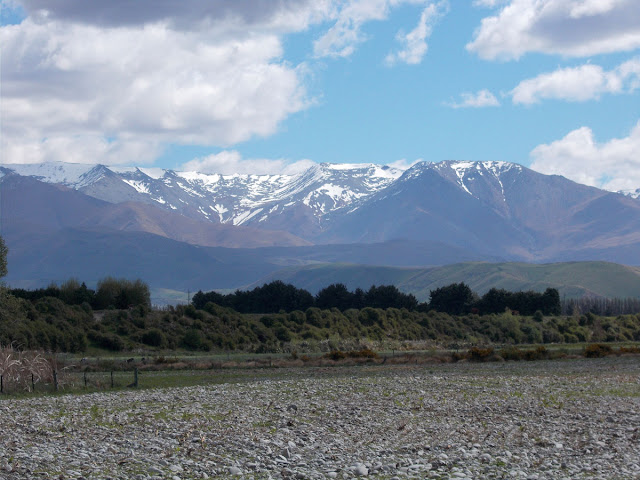 After that, as much as I don't like saying this...the trail was boring. I thought I would be following the river but instead you ride along a gravel road with huge gorse bushes pretty much obscuring any view you may have. Add into this a very loose gravel surface and strong headwind and my ride was starting to feel more like a chore. After a couple of river crossings and wet feet, I hit the highway again before veering off past paddocks, and I did catch a few glimpses of the river. 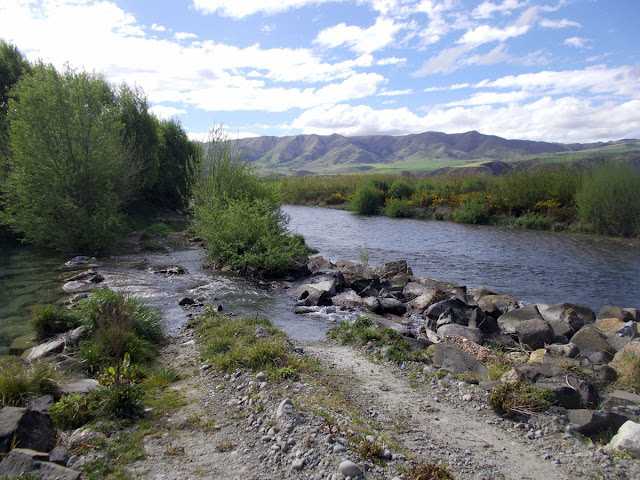 I met up with Mark who was riding from the other direction to meet me and just to top the ride off, I got a puncture!!! The ride into Duntroon goes through the newly established Duntroon Wetlands, They have done an enormous amount of planting there and once it all starts growing will look spectacular. 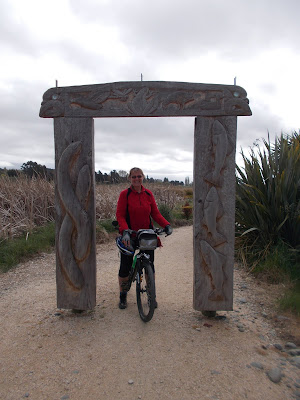 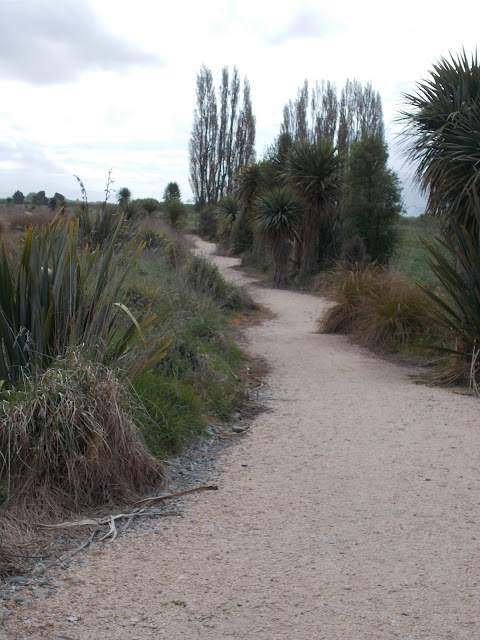 After this experience I am still keen to do the whole of the trail, this was only a tiny portion of it and probably the most boring part. Hopefully the gravel won't be as thick in other parts, though it does make for fun skidding out on the corners!

So after all that it was getting a bit late so we headed back to the campground via Elephant Rocks. The whole area around here was once an inland sea, and there are amazing outcrops of all different types of rocks everywhere as well as an abundance of fossils. Crazy to think it was all seabed once. 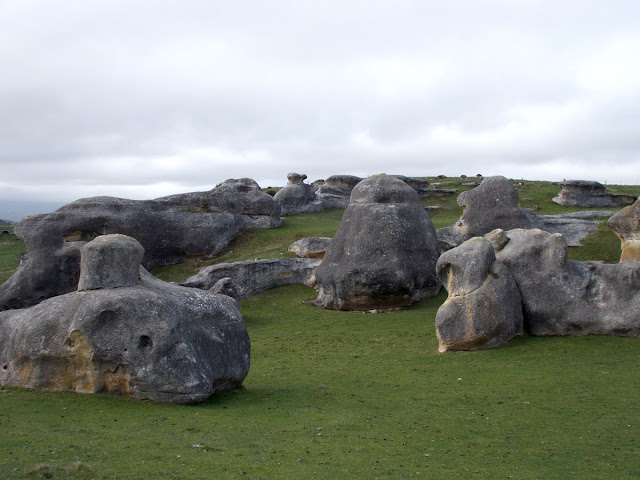 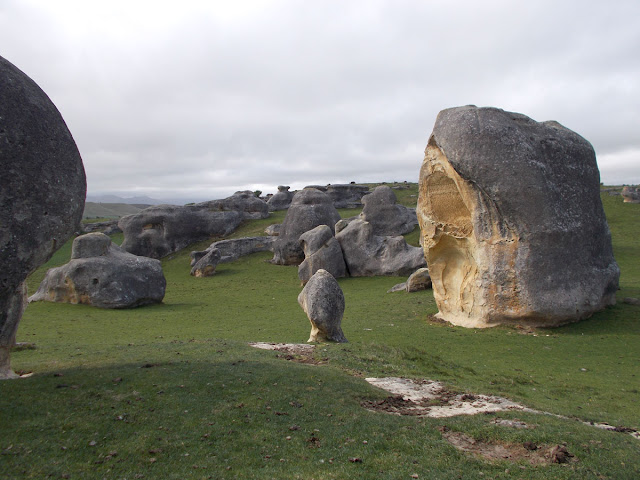 Next day it was time to head home via Danseys Pass. Absolutely stunning scenery on a very winding, narrow gravel road. I kept thinking this would be so much fun to ride, so maybe that will be my end of summer challenge.
A great couple of days away...its always so good to discover new places that you never realized were so close by. 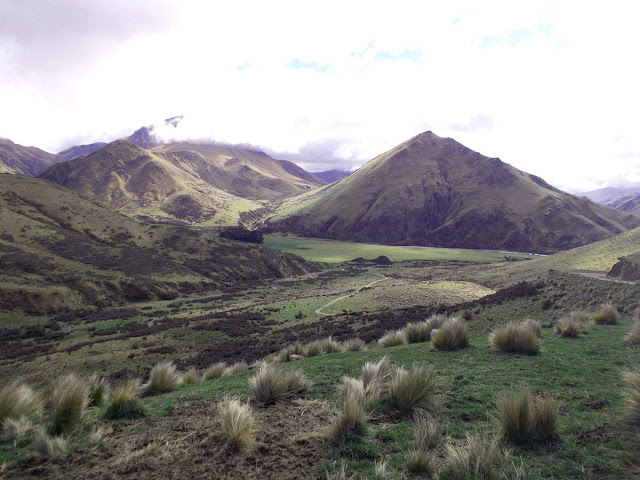 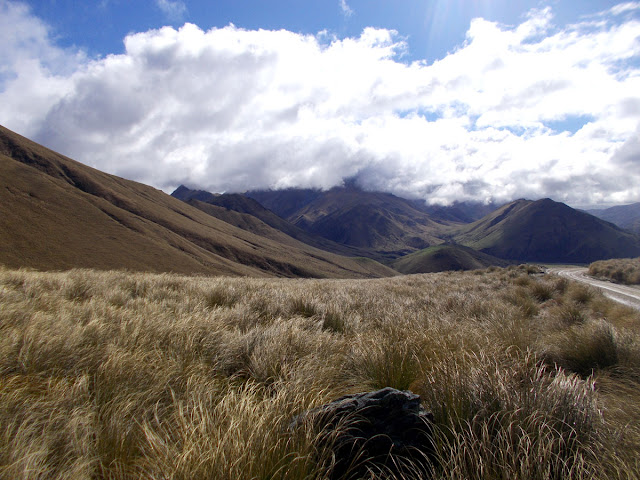 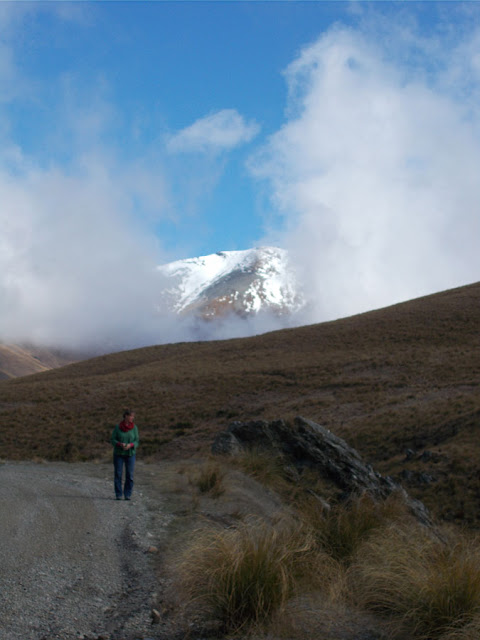 " Escape and breathe the air of new places."