I woke up at Tiffs in time to have a quick cup of coffee, then it was time to ride with her to Oakland Station to catch my Amtrak train to Paso Robles and then to be reunited with Birdy!
Ha...best laid plans and all that.
We got to the station and the train had been delayed by 2 hours but that was no worry. I can quite happily sit and people watch for a couple of hours, so said a sad farewell to Tiff and after a couple of huge big hugs she was off. I'm sure we will see each other again one day. Both of us have unfinished bike touring business in each others country.

So time passed and the delay grew longer....train was 4 hours late now and I was starving. No breakfast except coffee and a couple of mini tortillas I had in my pannier, a bit of peanut butter and an apple. Finally the train turned up and I thought yay I'll get some brunch but no.....the kiosk didn't open for another 2 hours! But I did finally get to eat a pretty bad pizza which by that time I was so hungry it tasted good.

The train trip itself was uneventful and late, but it was interesting watching the scenery go by. Any new place is interesting to me. 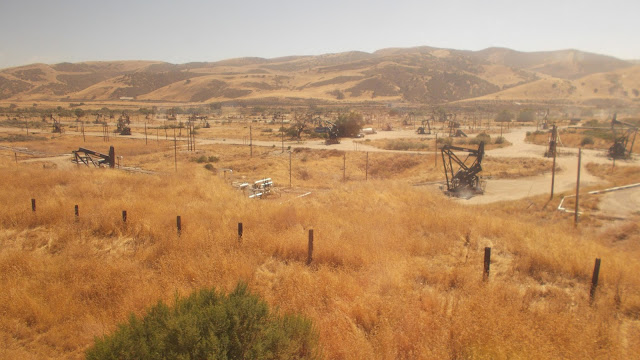 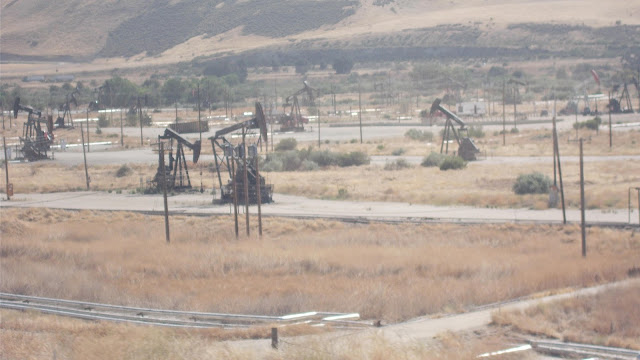 So the train slowly, and I mean slowly made its way to Paso Robles. We were now 5 hours behind schedule and I knew there was no way I was going to get to the bike shop in time to pick up Birdy, which meant no way to get the camping ground out of town. So I rang the bike shop to let them know I wouldn't be in and they hadn't even got Birdy out of her box yet!

Now I am normally a very easy going sort of person, if something goes wrong I just take it in my stride but at this point I was feeling stressed. On a slow train to Paso Roble, no bike, no idea where I was going to stay or what time I would arrive, no wifi on the train, and a super slow network connection on my phone AND I was hungry.

So my dear friend Alan got a very stressed phonecall, with me barking instructions to him to book me the cheapest hotel he could find in Paso Robles. Of course the wonderful friend that he is, he looked at the cheapest hotel and decided he didn't want me staying there, and instead treated me to two nights in a much, much nicer place. Again thank you so much bestie.

Everything sorted I was now only hungry but much happier, finally arrived into Paso Robles and it was soooo hot, even at 6.30 at night. I struggled up the street with all my bags to the hotel and collapsed into my room, but not for long. A quick shower and I was out for food and glass of wine. 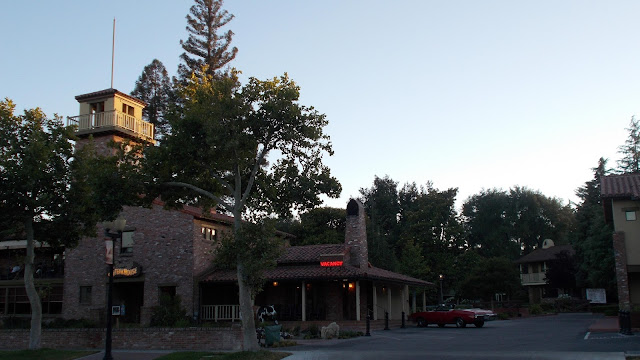 Paso Robles is a lovely town with a big park in the middle of the town square. All the streets surrounding the park are filled with shops, expensive looking boutiques, cafes, bars and bistros, wine tasting rooms and those awful homeware shops selling faux country furniture.

The Park was filled with people and on closer investigation there was a blues concert going on, lots of people picnicking on the grass, so I found myself a nice little cafe where I could hear the music and ordered a very nice glass of red and some food. As a snack I had home made bread with bee pollen butter! Never heard of bee pollen butter before and it was delicious. 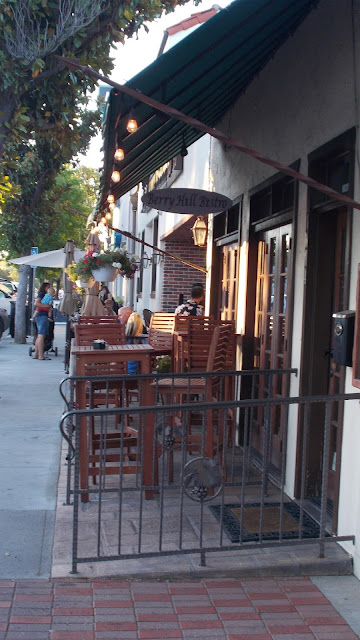 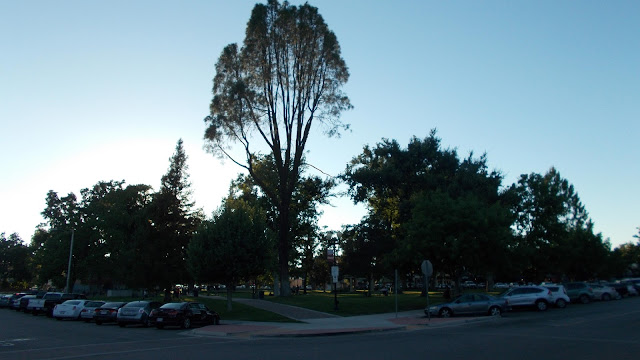 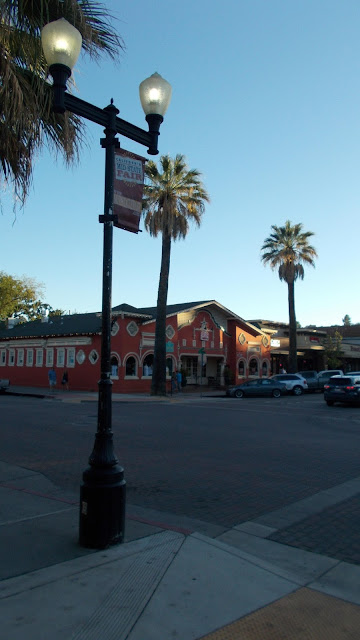 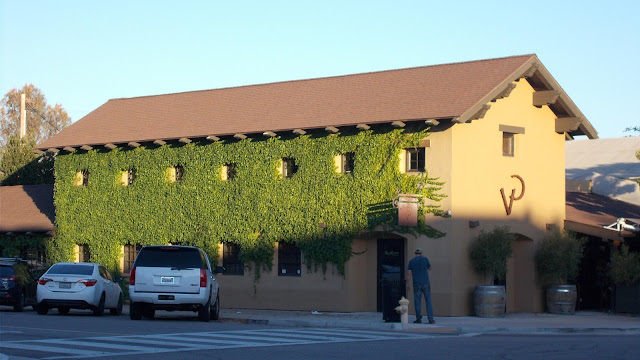 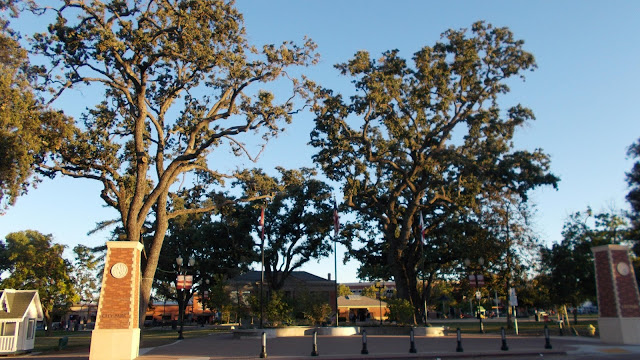 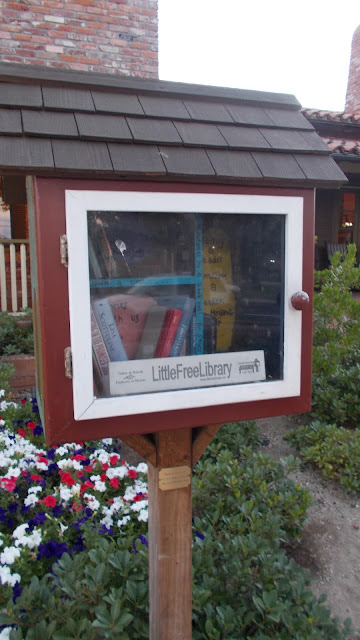 Next day I set off to pick Birdy up and she was set to go. I felt so happy having her back and we rode all around Paso Robles, biked up the highway to all the chain stores and grocery stores and then ended up having a picnic in the park and chatting to another touring cyclist.

So my time in Paso Robles ended up better than what I thought it would. My plan the next day was to start riding to the coast and meet my friend Alan somewhere on the road, but he had concerns about me biking in 42 plus degree heat. Of course I said I'll be fine but I did end up listening to his voice of reason...I'm not use to biking in such hot weather. So my bike tour has officially ended and time to start The Roadtrip.

I was all packed up, ready to go and looking forward to seeing my friend. I'm so lucky to have two best friends (besides Mark of course!) in Alan and Tinker. The downside is that they both live so far away from me. We chat on skype almost daily but its the little things you miss like meeting up for a pizza and wine, or beer and onion rings! So getting to spend time with Tinker at the start of my trip and now 10 days with Alan at the end is such a treat.

So Alan drives up in Hobbes (his red jeep) and after 7 weeks on the road alone, it was so great to see a familiar face I nearly cried and couldn't wipe the grin off my face either! After a big hug we loaded up Hobbes with my gear and yay....theres my pack I sent to Alan from Seattle, which means I have different clothes to wear! Our first stop out of Paso Robles is a couple of wineries. 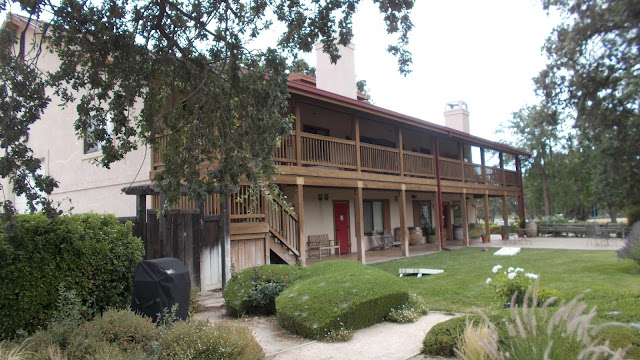 There was one owned by a kiwi and it was so nice just sitting outside with a glass of wine chatting and catching up. 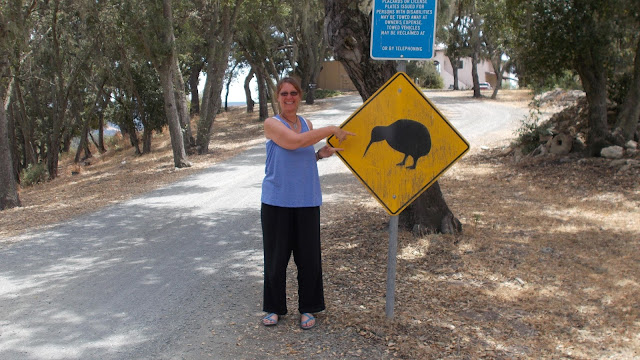 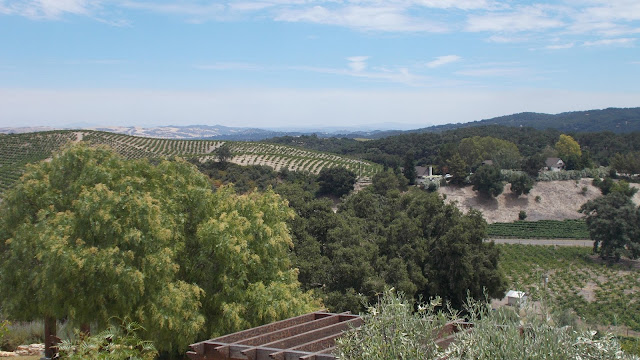 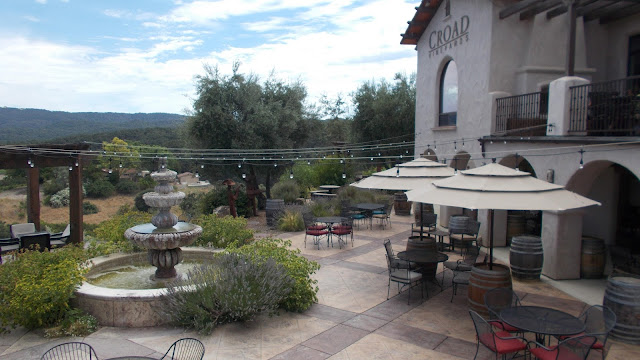 It certainly was a hot day and the road had very little shelter, so I was glad not to be biking. Our destination was Cambria for night and the next day we were booked on a tour of Hearst Castle. But before that I was treated to a wonderful pampering at a spa in San Simeon. Since I had stopped biking every day my body was feeling more achy than ever, so the massage was just the thing.

Next day it was off to Hearst Castle. What an amazing place! We did the Grand Rooms tour and it wasn't like I expected at all. The story behind the building of the castle and history is so interesting, and the the castle itself has to be seen to be believed. A lot of the rooms had a very medieval feel to them, and a gorgeous tiled swimming pool that looked like it belonged in Ancient Greece, while the outside had a very Moorish feel to it. The views from the castle down to the coast were stunning and the property is still run as a ranch. The castle and grounds were gifted to the state of California. 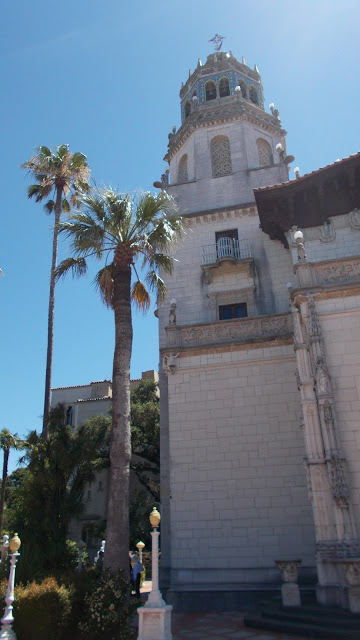 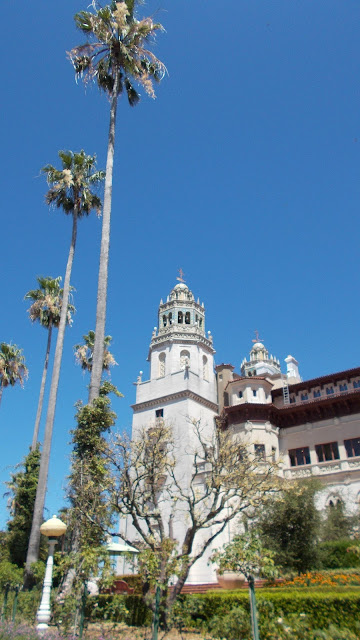 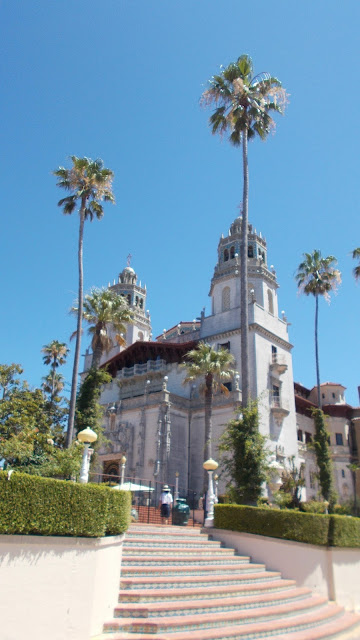 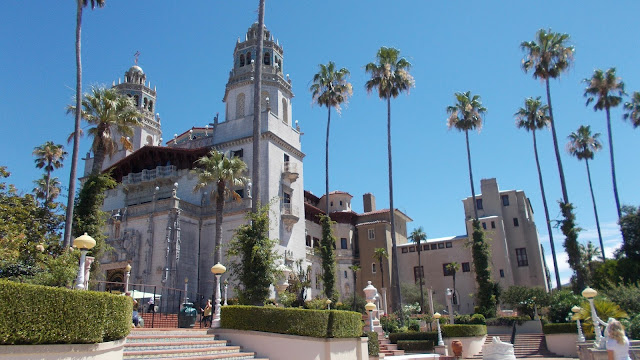 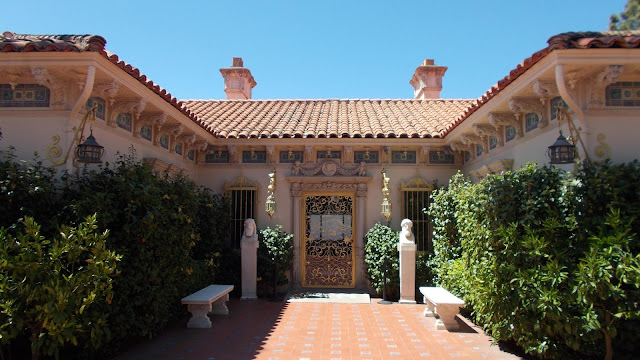 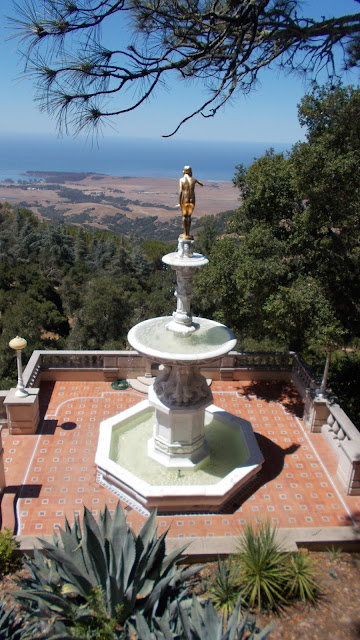 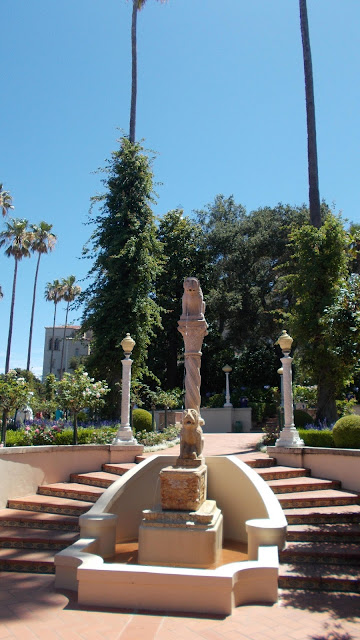 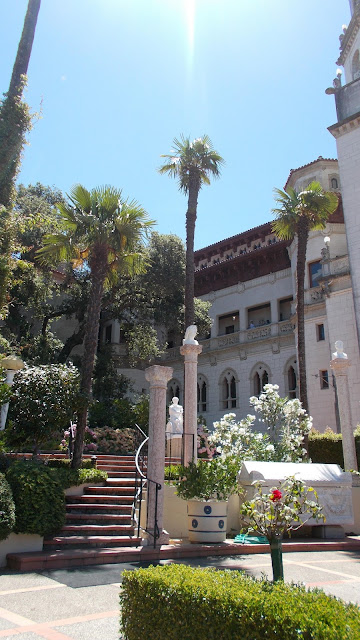 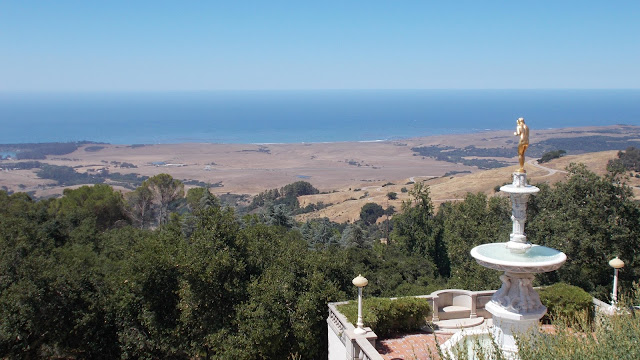 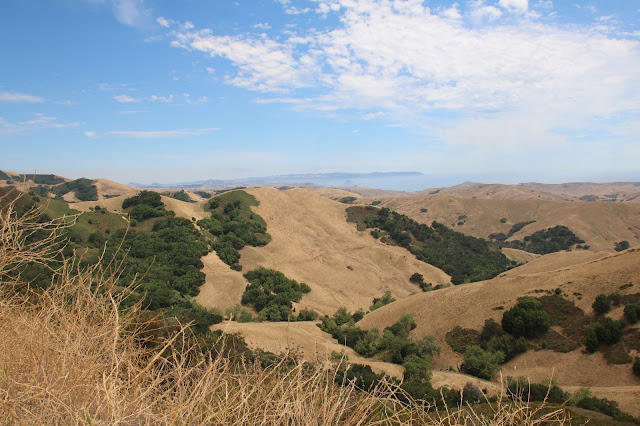 The next stop of the day was a visit to the Elephant seal colony. These seals were heavily hunted for their blubber and the numbers dropped to as low as 50, but now they estimate the population to be 225,000 and growing which is good news. 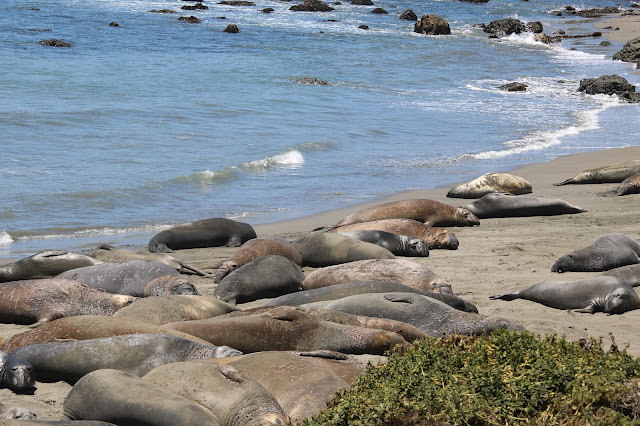 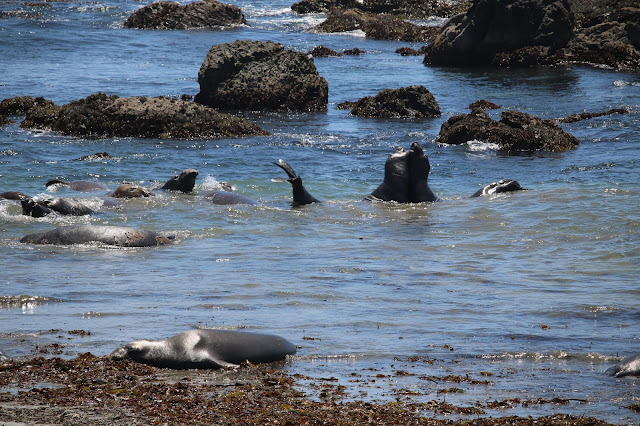 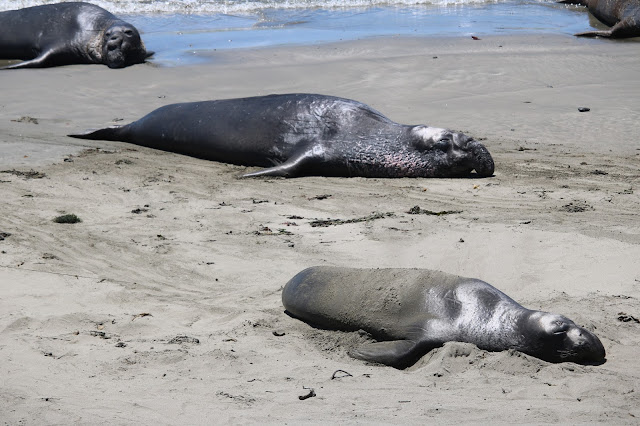 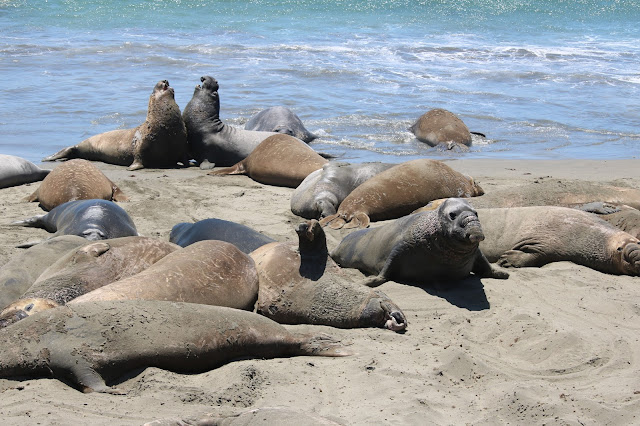 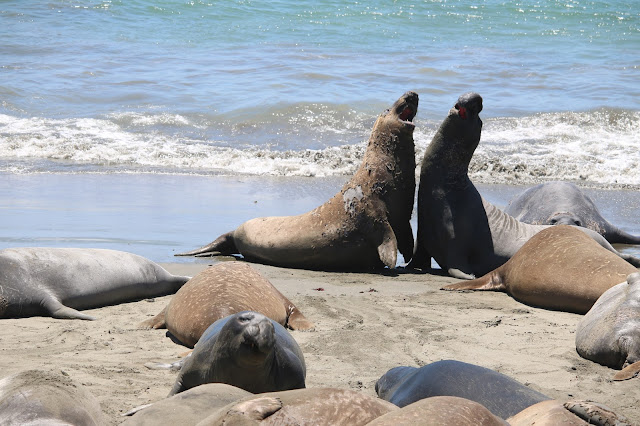 I could have watched these Elephant seals for hours. They are the funniest things, lying in the sun then occasionally tossing sand over themselves or heaving themselves to a better position. There was also a lot of fighting going on between the males so maybe it was mating season. Alan came up with a great collective noun for them....a flatulence of Elephant seals! He also gets credit for the seal photos.

After this it was a not to long to drive to the next overnight stop at Santa Paula. I enjoyed the drive down the coast as this was in my original plan to bike and meet Alan in Santa Barbara, so we passed a lot of familiar place names that I remembered from the guide book and maps.

Not much to say about Santa Paula...had dinner in a mum and dad Mexican place. I am still underwhelmed by Mexican food, but I don't think I have ever eaten really good Mexican. Also I prefer the spices and seasonings of Indian and Asian food and find Mexican food a bit bland and heavy.

I was looking forward to the next days drive...it was quite a long days driving and we would hit the desert on our way to Vegas baby!!

But I will leave that and the story of my big Vegas win for the next post.