I meandered today knowing it was only going to be a short day so I stopped and enjoyed the coastal scenery. The traffic noise and the amount of people at the view points did make it a bit less enjoyable. I think this was maybe more to do with my attitude today, I had thought I would be biking in lovely warm sunshine, but seem to have more grey skies than anything which does put you in a certain kind of mood at times. 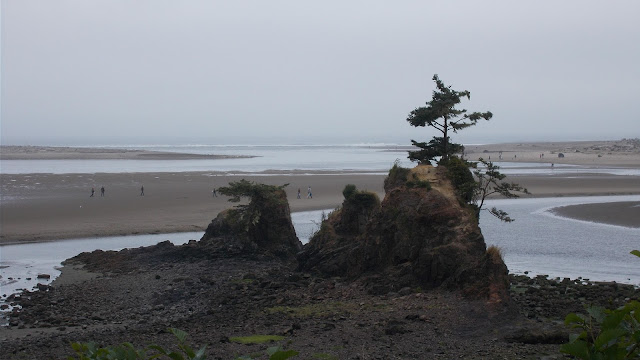 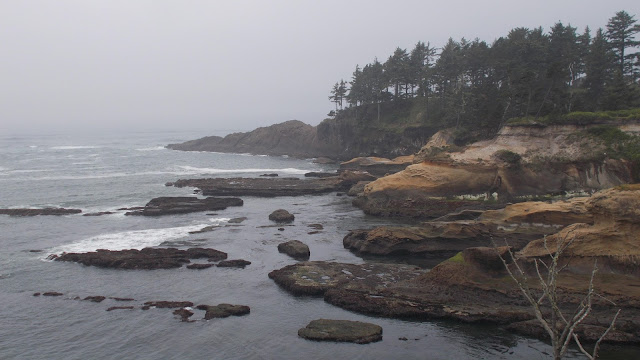 One stop I wanted to make today was Bike Newport in funnily enough... Newport. Birdy's gears were playing up again and I just couldn't get them right and I knew she needed some attention. Rode up to the bike shop and who should be there drinking beer already but Christophe and Brett!
Bike Newport is a haven for the touring cyclist...they have hot showers, you can do laundry and have a beer in the bikers lounge. I was so impressed with the service I got...they had trouble with Birdy so called in the top notch mechanic on his day off to sort her out!
When I had work done on my bike before I left NZ they put in a new bottom bracket BUT it was the wrong size...3 mm too big and that had been the cause of all my problems so far on the tour.
Thankyou so much Bike Newport..you guys are the best!

Got to South Beach State Park, my camp for the night. the guys were already there but I had got lost again and taken the long roundabout way to the state park, and then couldn't find the hiker biker site. 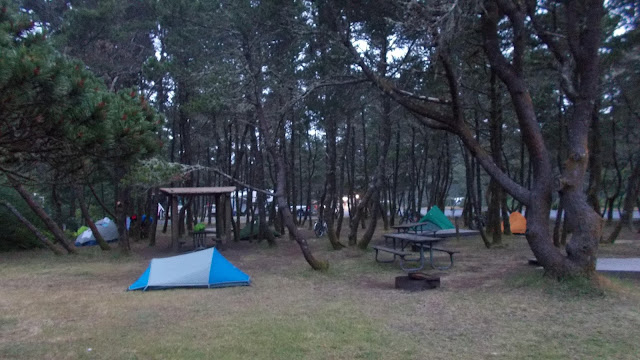 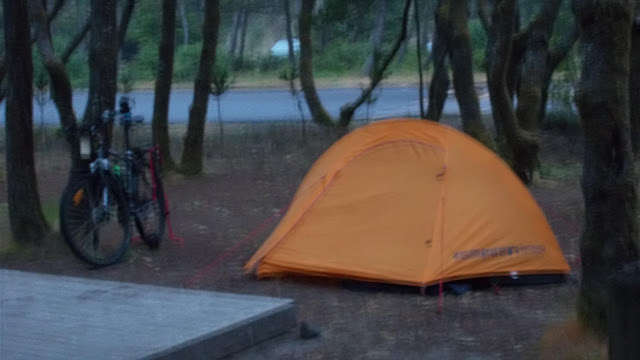 Met a guy at the campsite who is walking to Seattle. It has surprised me how many people are walking the coast....some are just doing it for an adventure and holiday, but others are doing it as lifestyle. I wonder if it is similar to the depression when people took to the road looking for work?

Off to Carl G Washburne State Park tonight and I have no idea who Carl G Washburne is! Riding through Sea Gulch I realised its the chain saw carving capitol of the world so of course I had to stop and look. The first place all they seemed to carve were bears...the owner even had bears of the side of his pickup which I thought was kind of cute. 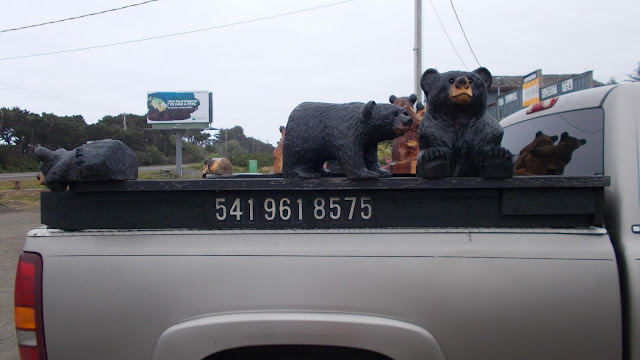 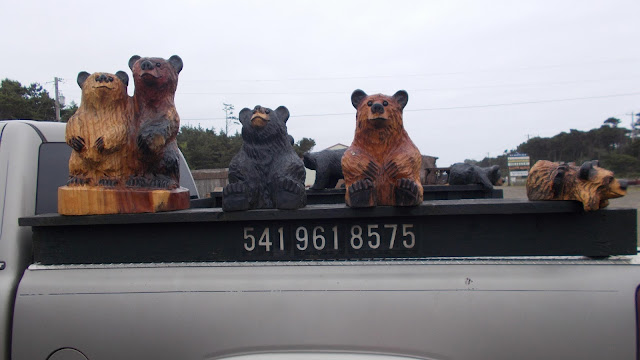 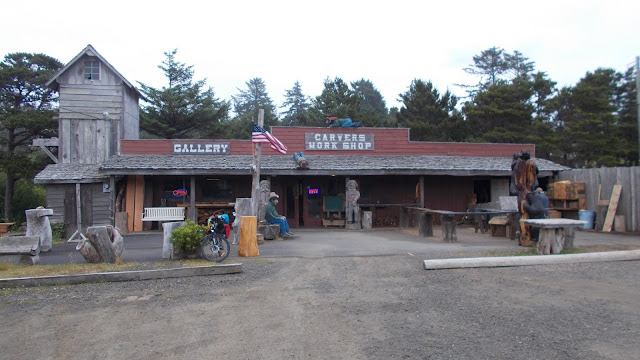 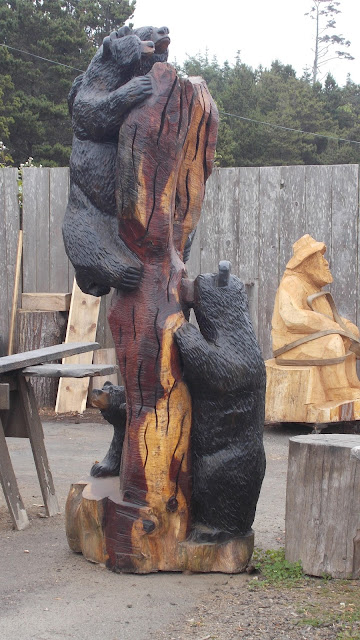 They all seemed to have their specialty but I preferred the bears to the dolphins and the weird looking monsters. Not really sure what this place below was selling. An awful lot of people seem to set up their houses as thrift shops, so maybe that's what it was. 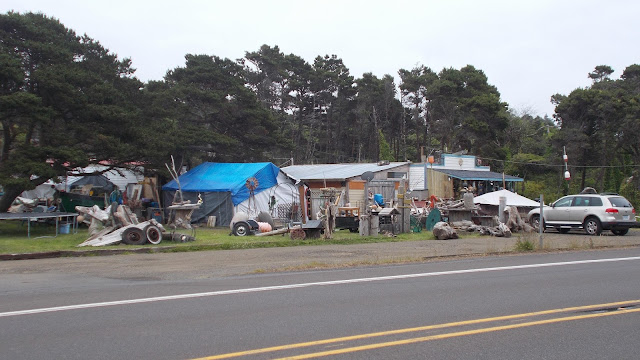 The road was not too busy, so a great day riding. Even managed to catch up to Christophe and Brett but I think they may have been taking it slow too! 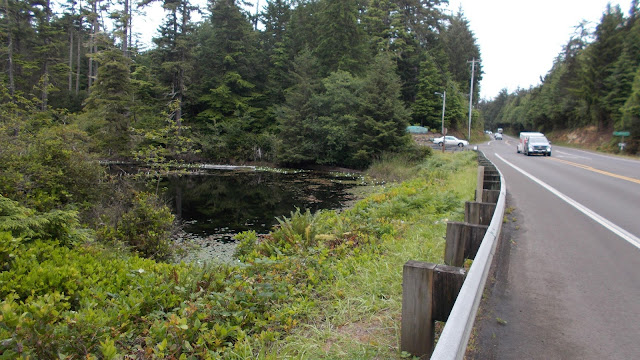 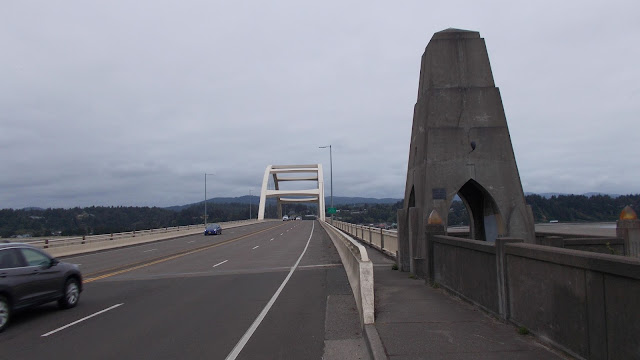 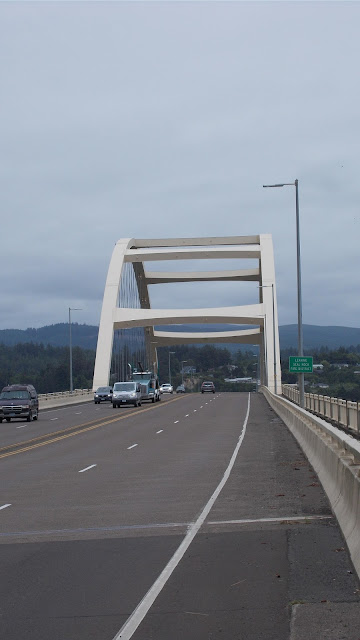 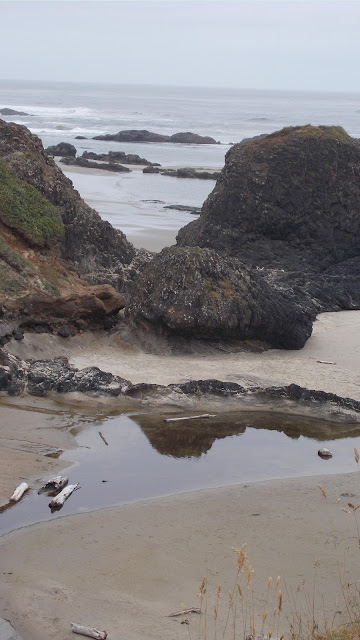 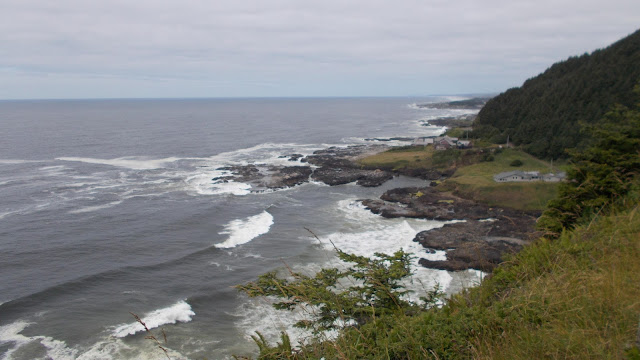 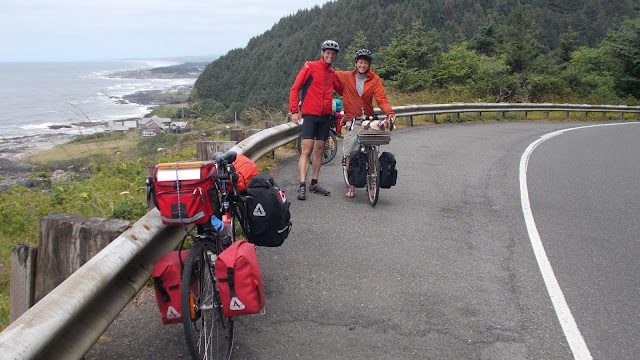 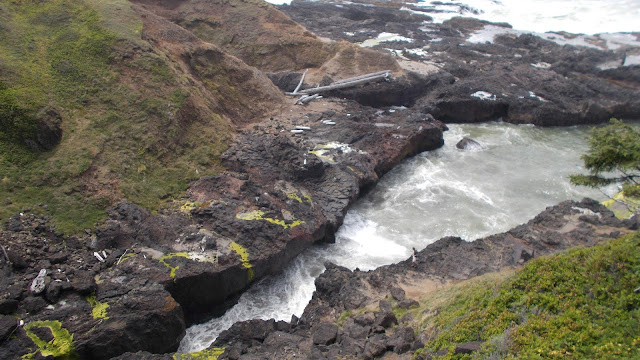 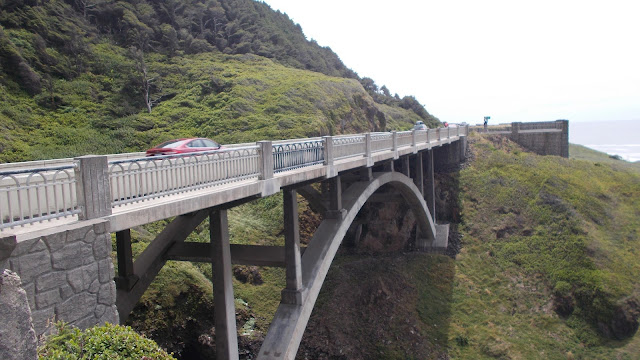 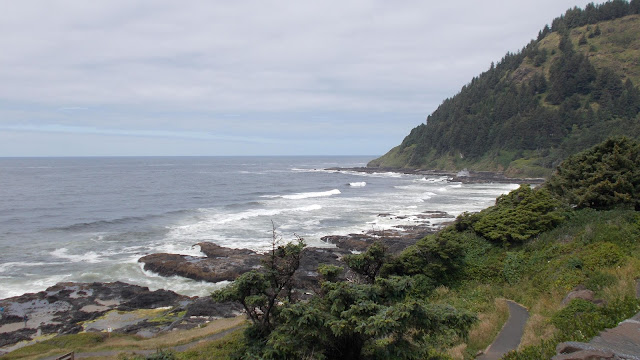 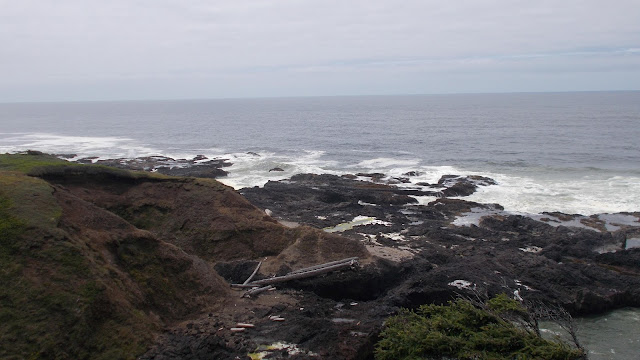 I also picked up a new travelling buddy today. I was riding along the road and just poking out of the gravel by the shoulder was this little ear and arm. So of course I had to stop and rescue him..so meet Roadside Bear or RB to his friends. After a good wash he scrubbed up pretty well and happily waves to the cars behind me now.  Of course I had to give Christophe and Brett a hard time about not stopping to rescue him! I also found a blue plastic shark called Maco that is now travelling on the front of Bretts bike. Good day for highway treasures. 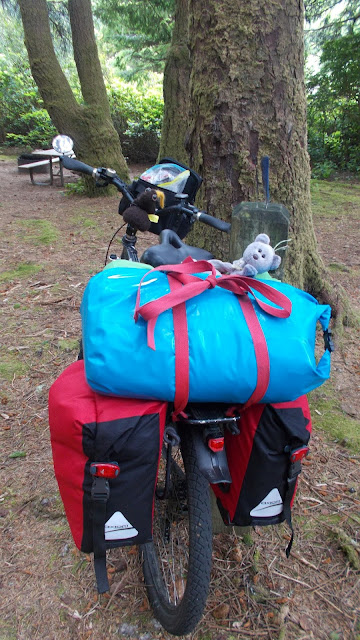 Its Bretts last night on the coast before he heads inland so we decided to have a BBQ and beers at the campsite. Christophe, Brett and I were the only ones in the hiker biker site and the campsite was lovely in amongst the trees and only a short walk to the beach. We saw the most beautiful sunset...a fitting end to Bretts Coastal tour. 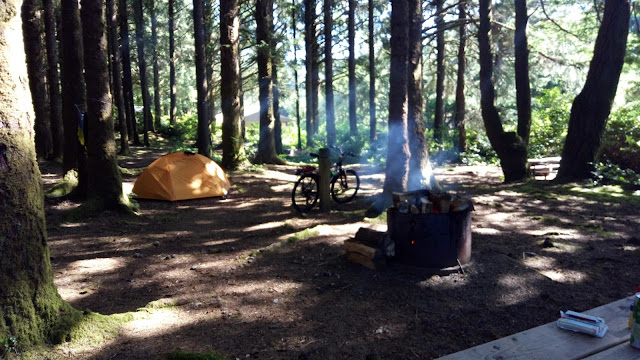 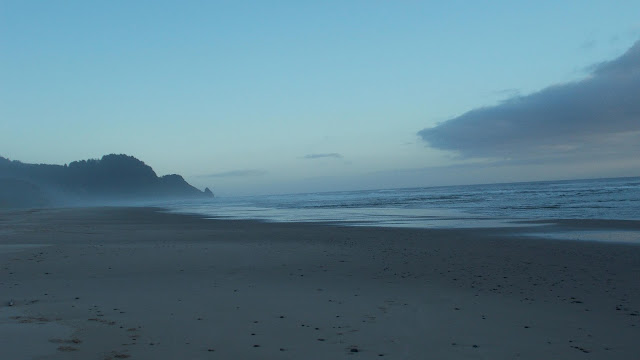 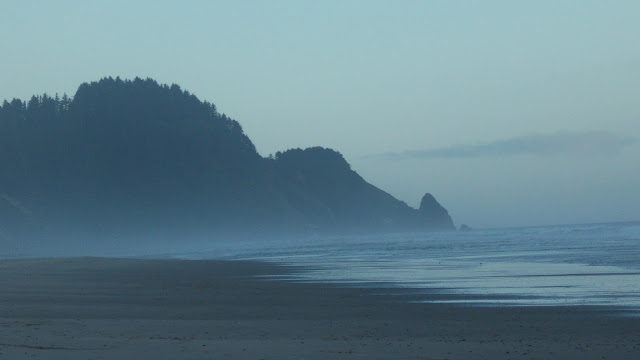 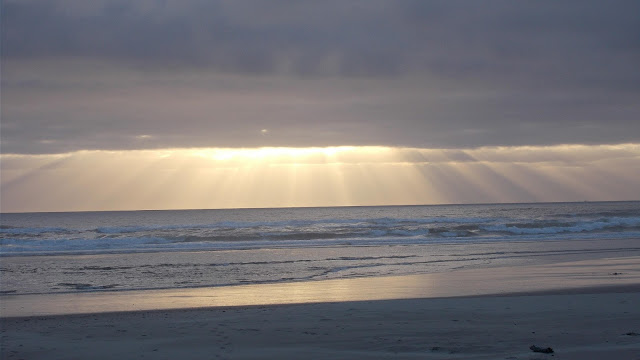 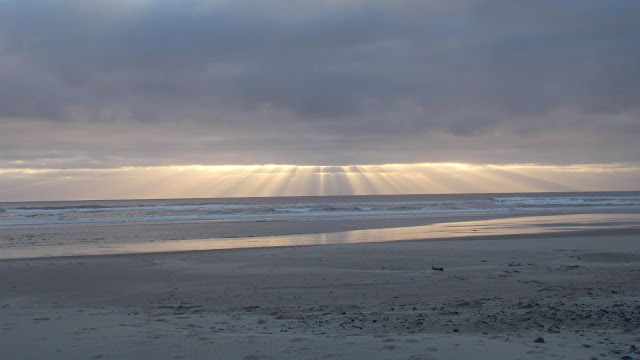 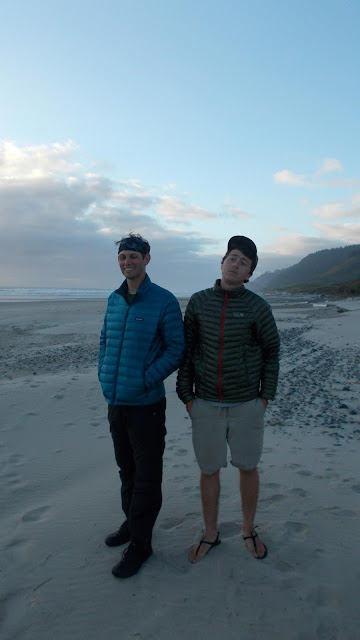 I really enjoyed camping with Brett and Christophe and I can't put it into words any better than what Brett has written.

"Most important to this week are the connections I've made with others. Among many other travelers from all over, I've befriended a Canadian and a New Zealander with whom I've spent the week meeting nightly along the coast. Sharing sunsets, beer, cultures, jokes, and our views on life have made for some very memorable evenings by the campfire.
The people I've encountered seem to agree that in all of our normal lives, we are very different. Acknowledging that we wouldn't approach or talk to each other if we crossed paths in a normal setting. But on the road we transform from strangers to a tribe. We all had the same struggles and are overcoming the same challenges. We can share experiences and really listen to each other in ways that our normal lives would never facilitate the time and space for.
I think back to a week ago when I ran across two very different strangers cycling down a similar path as mine. Yesterday I left them with hugs and a saturated heart. This connection is the kind that humans can use to build things together, rather than destroy. I have immense gratitude for the time away from my daily life to relearn that this type of comradery can form between people who are from such different walks of life.
Masks aside, are we not all just lovers and dreamers inside?"